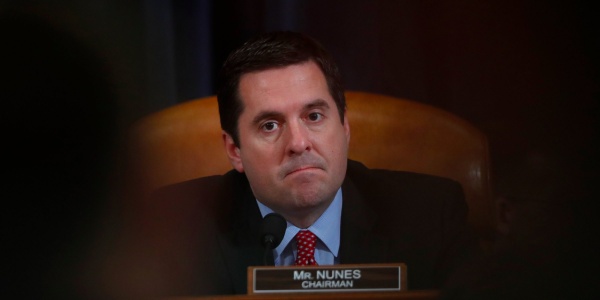 Date Posted: Thursday, February 15th, 2018
Last month, a site called the Maine Examiner reported that Rep. Chellie Pingree, a Democrat, was the state’s only member of Congress to vote to shut down the government. The site illustrated its story with a picture of Pingree next to Rep. John Lewis (D-GA), though Lewis wasn’t mentioned in the story.
Two weeks ago, another site, the California Republican, shared an article promising to explain “the process behind #ReleaseTheMemo,” House Intelligence Committee Chairman Devin Nunes’ (R-CA) push to release a document that he has said shows anti-Trump bias at the FBI.
Both sites look like news outlets. But neither have staff writers, editorial guidelines, or physician offices. Instead, the Maine Examiner appears to be linked to the state’s Republican Party. And the California Republican is a project of Nunes’ reelection campaign.
The sites certainly aren’t the first political mouthpieces to disguise themselves as journalists. Mike Pence planned to create a state-run news service during his tenure as Indiana governor, before pulling the plug in the face of fierce criticism. The Republican Governors Association set up a partisan news site last summer that didn’t disclose who was behind it until reporters made inquiries.
Nor are the sites likely generating huge traffic, based on their social media numbers.
But for the political interests behind them, the sites represent a useful way to spread their message to supporters while falsely conveying the authority of independent journalism. Such fake “news” is particularly troubling at a time when online content can spread virally without consumers knowing who’s behind it, and the 2016 election saw hundreds of thousands of Americans were unwittingly duped by news articles, ads and social media posts produced by Russian “troll farms” and Macedonian teenagers.
“There’s a general lack of transparency here,” Brendan Fischer of the Campaign Legal Center told TPM. “When you have these ongoing accusations of fake news and attacks on the legitimate news media, and then partisan candidates creating what are actually fake news sites to help muddy the waters and push their message, it helps weaken trust in journalism and the media as an institution.”

The California Republican briefly went offline after Politico reported on it on Sunday. The site said that was due to “heavy traffic and an attack on our servers.” It was back up as of Tuesday.
Nunes’ campaign and congressional office did not immediately respond to TPM’s requests for comment.
The Maine Republican Party has staunchly denied any involvement in the Maine site, but according to a local news report, metadata indicates that a username linked to the group’s executive director, Jason Savage, registered the site’s web hosting account and downloaded the design template.
Neither Savage nor Maine GOP communications director Garrett Murch responded to TPM’s request for comment.
The Maine Democratic Party last month filed a complaint with the state ethics commission requesting an investigation into the GOP’s ties to the site and whether campaign finance laws were violated. The commission confirmed to TPM that the complaint will be reviewed at a meeting next week.
Both the Nunes campaign and the Maine site appear designed to mimic the conventions of legitimate news sites. They feature a mix of local and national news articles largely excerpted from other mostly conservative publications and framed with a conservative slant, as well as sports and human interest stories unrelated to politics. (The Nunes site promises “the best of US, California, and Central Valley news, sports, and analysis.”) On Facebook, they’re catalogued as “media/news” companies.
And neither site gives much indication to a casual news reader that they’re political propaganda. The California Republican has no “About” page explaining its purpose. At the very bottom of each page, in seven-point type, appears the line: “Paid for by the Devin Nunes campaign committee.” The Maine Examiner offers even less information, telling readers on an About page that it’s the work of a “small group of Mainers.”
The Republican Governors Association’s site set up last year, the Free Telegraph still doesn’t include a disclosure on its social media feeds.
“It’s very clear on the Free Telegraph site that it is connected to the RGA,” RGA communications director Jon Thompson told TPM in an email, saying the site was “just another outlet” to tout the successes of GOP governors. “On every article post, at the bottom, it notes that the RGA has sponsored the article/site.”
Thompson also said a Google search would make clear the Free Telegraph is a project of the RGA—though few news consumers would likely have any reason to run one.
The FEC requires a “clear and conspicuous” disclaimer on all communications by a campaign committee. Stephen Spaulding, a former FEC lawyer now at Common Cause, said the sites’ meager or non-existent disclosures raise particular issues in an era when consumers often encounter news on social media rather than on the website of the news provider.
“The way that news is shared now, things kind of spread organically and it’s just not always clear who is behind it,” said Spaulding, who called the use of news-style sites “dangerous for democracy.”
A series of academic studies done in the wake of the 2016 campaign suggests a low level of news literacy among consumers. A Stanford University study of some 7,800 students found that news consumers a “stunning and dismaying consistency” in their inability to evaluate the credibility of information they consumed online. Another report by a trio of political scientists found that “almost 6 in 10 visits to fake news websites came from the 10% of people with the most conservative online information diets.”
As a result, campaign sites without transparent disclosures can become just another part of the morass of legitimate news, sponsored content, political gossip and pure hogwash available online.
As Alex Howard, deputy director of the government transparency advocacy group the Sunlight Foundation, put it, these site disclosures are the only way that “the public, when they’re staring at the same glowing box, has at least a prayer of being able to understand who paid for it, what that entity is and what its goals are.”