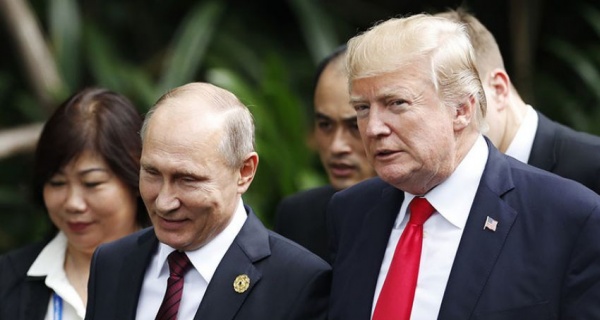 The same week the Russian spy chiefs' visit was made public, the Trump administration announced it was declining to enforce sanctions, begrudgingly signed by Trump in July 2017, punishing individuals for doing business with the Russian defense or intelligence sectors. This provision, the Trump administration argued, would require them to sanction Americans allies, such as India, Turkey, and Saudi Arabia, who all purchase Russian weaponry. Later that same day – and mere hours before the legal deadline – the Treasury Department released a list of Putin-connected oligarchs; the list was supposed to shine light on the corrupt intersection between the Russian state and its industrial titans, but was nearly copied in toto from a Forbes Magazine list of the world's wealthiest Russians. Administration officials didn't even pretend to operate in good faith here. The oligarchs' list, which was seen as a potential prelude to a new round of sanctions against the named individuals, was instead treated by administration officials as a tossed-off farce.

To an unusual degree, the Trump administration is driven by the president's own elemental predispositions. In the case of his wariness toward America's allies, and his belligerence regarding its adversaries, Trump's attitude seems rooted in an atavistic belief – likely derived from a lifetime in New York City real estate – that nothing, nothing is more contemptible in this world than a sucker. Better to be a shifty con, goes the thinking, than a hapless mark. This is the intuition driving Trump's browbeating of core NATO allies like Germany, and key NAFTA trading partners like Canada and Mexico. Everyone is free-riding; no partner is paying its fair share. Rival or hostile states are viewed even more leerily. Iran, Trump has said, is playing the U.S. for a fool, leveraging the 2015 nuclear deal negotiated with the Obama administration to engage in all kinds of bad behavior regionally, and cheating on the deal besides; China's trade practices are purposefully injurious to U.S. interests; North Korea is irrational and undeterrable.

The fact, then, that Russia – overtly hostile to the American-led international order, a kleptocratic mafia state with a viciously effective intelligence apparatus – is the only country that President Trump appears reflexively inclined to give the benefit of the doubt, seems, under the circumstances, pretty odd. It is perfectly reasonable to argue that the U.S. should pursue better relations with Russia on points of convergence and mutual interest. It is bizarre to do so when this strategy is coupled with utter contemptuousness about most other long-standing U.S. alliances and the pursuit of diplomatic solutions to serious geopolitical challenges. And it is unspeakably more jarring when the one country with which the president seems interested in seeking a rapprochement happens to have masterminded a cyber-espionage campaign that helped ensure his electoral victory.

Over the past year, however, the Trump administration's actual Russia policies have exhibited a strange ambiguity, pitting the president's own pro-Russia proclivities against powerful Russia hawks, both within Congress and the president's own Cabinet, who are deeply suspicious of the Kremlin. The wheels of government turn slowly, and these Russia hawks have actually managed to implement harder-line policies than those during Obama's tenure. Consequently, U.S.-Russia relations now are more confused, and confusing, than at any time in recent history.

Way back in December 2016, just before Trump's inauguration, the Obama administration announced that in response to Russia's interference in the U.S. presidential election it was expelling 35 Russian diplomats (read: spies); shuttering two Russian-government-owned recreational compounds in New York and Maryland; and imposing new sanctions on Russian officials and government entities. The New York Times and other outlets reported that, at the time, leaders of the Trump transition team, including Michael Flynn, privately assured Russian officials that they would revisit the sanctions after Trump took office, urging them not to retaliate. Indeed, Russia's response to these actions was uncharacteristically muted. This was a "surprise" to Obama administration officials. Jeffrey Edmonds, the National Security Council's Director for Russia until March 2017, told me, "We anticipated them kicking out 35 of our people, pretty much immediately."

Once Trump actually took office, domestic political pressures seemed to prevent him from pursuing pro-Russia policies. In July 2017, after the new round of sanctions, Russia's patience ran out, and it announced a 755-person decrease to the number of personnel working at U.S. diplomatic facilities in Russia. (Most were Russian nationals, however, not U.S. diplomats – meaning the action was less severe than Russia made it appear.) The Trump administration's response was surprisingly harsh: In late August 2017, it ordered the closure of two Russian diplomatic trade annexes and, more importantly, the shuttering of Russia's San Francisco consulate, a hub of Russian espionage operations in the United States. Expelling a few dozen diplomats, as Obama did, is one thing; decertifying a major Russian diplomatic facility, which also happens to be a spy base, is another level of aggressiveness entirely. But many believe that Trump was either unaware of, or simply uninterested in, the details of the response. "My understanding with the way the NSC Principals Committee is working now . . . is that before the meeting [Secretary of State Rex] Tillerson and [Secretary of Defense James] Mattis come to an agreement on something, and basically the meeting is to brief everybody else on what's happening," Edmonds, the former NSC official, told me. Trump "wouldn't be reflective" about a request by Tillerson and Mattis to close the San Francisco consulate, he adds.

Sometimes, however, a president's Cabinet cannot save him from himself. Consider Trump's May 2017 White House meeting with Russian Foreign Minister Sergey Lavrov and Russian Ambassador Sergey Kislyak, which took place the day after Trump fired FBI Director James Comey. (According to The New York Times, Trump told Lavrov and Kislyak that Comey was a "nutjob" and that he "faced great pressure because of Russia," which was now "taken off.") What is less frequently recalled about that meeting is the discussion about Syria. According to the Times, Trump revealed to Lavrov and Kislyak that Israel had penetrated ISIS's secret bomb-making laboratories, where the terrorist group was attempting to construct laptop bombs undetectable by airport scanners. For Israel's mole within ISIS-held territory, this could have been a potentially deadly disclosure; it also could have revealed broader Israeli sources and methods, information that Russia might have then shared with Iran, Russia's ally in Syria. In fact, if anyone other than the president – who can basically declassify intelligence at will – had leaked this information to the Russian government, it would have been considered a national-security breach of the highest order.

In the past, Trump has been sympathetic to the (disingenuous) Russian argument that, despite its alliance with the Assad regime and Iran, the U.S. and Russia share a goal of eradicating ISIS within Syria. The most generous interpretation of Trump's behavior in May is that he truly – despite all reasonable evidence – believed Russia's rhetoric about making common cause against a terrorist threat. But that doesn't explain why the Trump administration appeared to shield its interactions with Russian officials from the American public. No U.S. press was allowed into the meeting. In fact, the only photographer present was from TASS, the Russian state-run media service. It is only because Russian media released a photo of the meeting that we even know Kislyak attended; his name was not included in the official White House calendar.

Nowhere has Trump's Russia policy been more conflicted than in the case of Ukraine, which since 2014 has been fighting a war against Russian-backed separatist militias, as well as Russian troops, in its eastern provinces. During the 2016 Republican National Convention, the Trump campaign reportedly took a very hands-off approach to crafting the party's official platform. The one exception, however, was blocking a section of the platform calling for the provision of lethal arms sales to Ukraine. The Obama administration, concerned about a spiral of escalating violence, declined to provide these weapons. (It did provide $750 million in nonlethal aid.) Many Republicans derided this position as weak and called for Obama to approve the sale of lethal weaponry. But thanks to the lobbying of Trump campaign officials, support for lethal arms sales was, in fact, stricken from the RNC platform.

The lesson of the past year is that there are limitations, even in the realm of foreign policy, to the modern presidency; and that the current inconsistencies in U.S.-Russia relations may be traceable to the overwhelming bipartisan and bureaucratic pushback to the president's odd affinity for a traditional adversary. The Kremlin "has always worried about a very deep anti-Russia, bureaucratic, congressional resistance," said Edmonds. "And I think they've realized that that's here to stay for a while."

As the Mueller investigation moves closer to the president's inner circle, including his own family, Trump may feel increasingly hamstrung in his ability to make a grand bargain with Russia – say, agreeing to accept Russia's illegal annexation of the Crimean peninsula in Ukraine in exchange for Russia's help arranging a peaceful leadership transition in Syria – and be forced to accept the status quo in U.S.-Russia relations. But many of these constraining forces are on the wane. Corker is retiring. Tillerson, who has a notoriously poor relationship with Trump, has one foot out the door. Sen. John McCain, another influential Russia hardliner, has brain cancer. For all his power, Mattis (and perhaps National Security Advisor H.R. McMaster) may not be able to stop a president who, prickly and eruptible, seems to want to make enemies of his friends, and friends with his enemies. "There's nothing I can think of that I'd rather do," said then-candidate Trump at a July 2016 news conference, five days after WikiLeaks published 20,000 hacked emails from the Democratic National Committee, and the very same conference when Trump encouraged Russia to hack and dump Hillary Clinton's emails, "than have Russia friendly."