A List Of White Supremacists Running For Office In 2018 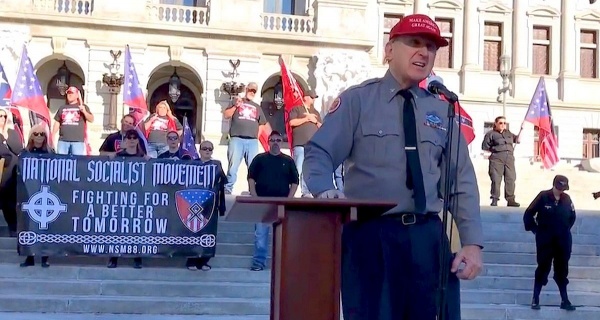 In 1989, he won a seat in the Louisiana House of Representatives. In the following years, he lost elections for U.S. Senate and Louisiana governor, earning more than 600,000 votes both times. And in November 2016, more than 58,000 people in Louisiana voted for Duke to be their senator. It was far from the number he needed to win, but still an alarming show of support for a man who thinks the Holocaust never happened.

White supremacist candidates like Duke tend to be roundly condemned by establishment Republicans. Voters don’t like them either ? usually. But when they receive tens of thousands of votes, like Duke did less than two years ago, it’s a reminder that their views are less fringe than we’d like to imagine.

Duke isn’t running for office in 2018, but he’s encouraged by what he sees as a growing number of Republican congressional candidates who appear sympathetic to white supremacist causes or who are openly white supremacists themselves.

“I think it’s about time,” Duke told HuffPost. “I think there’s a tremendous amount of frustration in the white community and that we’re at a tipping point.”

Still more Republican candidates, many of whom are running for re-election, have used white supremacist slogans, invited white supremacists to official government events, or granted interviews to racist or anti-Semitic publications.

It’s important to identify these candidates, not only so people know who’s on their ballot, but because ? as we’ve seen ? someone who’s thought of as fringe one year can be in the White House the next.

There was a time when it was unthinkable that Donald Trump, let alone the white nationalist sympathizers he tapped for top administration positions — including Steve Bannon, Stephen Miller, and Sebastian Gorka — would rise to power.

On Feb. 6, the Chicago Sun-Times reported that Arthur Jones, a longtime neo-Nazi, is poised to be the Republican nominee for a seat in Congress representing parts of Chicago and its suburbs.

Jones is running unopposed in the GOP primary, set for March 20, and is almost certain to lose in the general election. (The district he’s running to represent has voted for Democratic candidates in 24 of the last 25 elections.)

His campaign website includes a document called “The ‘Holocaust’ Racket,” which describes the well-documented genocide of 6 million Jews by German Nazis during World War II as “the biggest blackest lie in history.”

Jones told the Sun-Times he is a former leader of the American Nazi Party. Last year, he spoke in Kentucky at a gathering of the National Socialist Movement, a prominent neo-Nazi group.

This is the sixth time Jones has run for the Republican nomination. It will likely be his first time securing it.

Prior to HuffPost’s article, Nehlen had campaigned for Senate candidate Roy Moore in Alabama, and had been the preferred candidate of former White House chief strategist and then-Breitbart News executive chairman Steve Bannon. Bannon has since denounced Nehlen, and Breitbart News has scrubbed its site of articles by and about him.

Nehlen has grown bolder with his bigotry since the start of 2018 ? particularly toward Jewish people. On Twitter, he posted a list of what he said were Jewish journalists from media outlets that had criticized him. He also tweeted: “Jesus is the Messiah. He is one and whole with the Holy Ghost. Jews (and others) who do not acknowledge this fact will burn in hell.”

On Jan. 31, Nehlen appeared on David Duke’s podcast to discuss how “Jews control the media.” White supremacists have long circulated conspiracy theories about how Jewish people supposedly have undue influence in the media and other industries.

“I respect [Nehlen] very much and think he’s very courageous,” Duke told HuffPost. “He’s talking about issues we need to talk about.”

Nehlen lost to Ryan by an 85 to 15 percent margin in Wisconsin’s last Republican primary. The next primary election is in August.

Sean Donahue is running to replace Rep. Lou Barletta (R-Pa.), who has his own entry on this list. In January, the Dauphin County Council of Republican Women invited Donahue to speak at a forum for Republican primary candidates. When the other candidates refused to appear at the forum with Donahue, the event was canceled.

In response, Donahue issued a nine-page statement on his campaign website expressing dismay that white people are becoming a minority in the U.S., and claiming that Black Lives Matter and Antifa are preparing an armed insurgency. He also defended his association with David Duke, whom he has featured as a guest on his online talk show.

In 2015, Donahue ran for mayor of Hazelton, Pennsylvania, as a member of the American Freedom Party, which the Southern Poverty Law Center describes as a white nationalist group.

John Abarr, a white supremacist who grabbed national headlines in 2014 for confusingly wanting to recruit black and LGBTQ people to the KKK, is running for the Montana state House of Representatives as a Democrat.

Abarr has run for office before, as a Republican. His current campaign website includes an apology to the “citizens of Montana for promoting bigotry and hate against minorities.”

But as noted by the Helena Independent Record, it says elsewhere on Abarr’s site that one of his key platforms is “pride and dignity for whites.” The site also calls for European Americans to be declared a protected class, claiming they are victims of “widespread discrimination and hatred.”

Augustus Invictus, born Austin Gillespie, was scheduled to speak at the violent “Unite the Right” white supremacist rally in Charlottesville, Virginia, on Aug. 12. That event ended with a neo-Nazi running his car into a crowd of anti-racist counterprotesters, killing 32-year-old Heather Heyer. (The rally grew so chaotic that none of the scheduled speakers ultimately spoke.)

According to the Southern Poverty Law Center, Invictus also worked with the prominent white supremacist Richard Spencer on crafting a racist and anti-Semitic manifesto known as the “Charlottesville Statement.”

Invictus was second in command of the Fraternal Order of Alt-Knights, the “military division” of Gavin McInnes’ Proud Boys, an explicitly sexist group with connections to the self-described “alt-right.” Multiple women have accused Invictus of physical and sexual abuse.

In an interview with SPLC, Invictus acknowledged he is a Holocaust denier. He’s been known to end his speeches with the phrase “Hail Death.”

Three days after the deadly Charlottesville rally, Invictus announced he was running as a Republican in the Florida primary for U.S. Senate. But in December, after fundraising woes, he dropped out.

Previously, Invictus had run for Senate as a Libertarian candidate in Florida. The chairman of Florida’s Libertarian Party at the time strongly disavowed him.

Former Rep. Tom Tancredo (R-Colo.) ran for governor of Colorado until dropping out of the race in January. He has said he is not a white supremacist.

But he’s had close ties to racist groups. Tancredo has published articles on the site of VDARE, which the SPLC describes as a white nationalist and anti-immigrant hate group. He was also scheduled to speak at a VDARE conference in Colorado Springs this April. (The venue’s owners canceled on VDARE after discovering who they were.)

In 2006, Tancredo spoke at a South Carolina fundraiser for a conservative nonprofit group. The event was promoted by the South Carolina chapter of the League of the South, a Southern secessionist hate group most recently seen marching in Charlottesville and at a “White Lives Matter” white supremacist rally in Tennessee.

As a congressman, Tancredo called for banning the Congressional Black Caucus and the Hispanic caucuses of both parties. He’s also compared Antifa to the KKK, said President Barack Obama should go back to Kenya (where he is not from), and has said the U.S. should bomb the Muslim holy sites at Mecca and Medina.

Like Paul Nehlen in Wisconsin, Tancredo was the preferred candidate of Steve Bannon.

Joe Arpaio, the former Arizona sheriff pardoned by Trump after a conviction for criminal contempt, is running for U.S. Senate in Arizona. He gained national notoriety for terrorizing Maricopa County’s Latino population. He unlawfully rounded up and detained people he accused of being in the U.S. illegally, segregating Latino inmates into a jail he called a “concentration camp.” (Some 160 people died in Arpaio’s jails, many of them by suicide.)

Rep. Steve King (R-Iowa) is an eight-term congressman up for re-election this year.

King has a history of signaling support for white nationalism. He keeps a Confederate flag on his desk, although he is from Iowa, which was not part of the Confederacy. He once said America shouldn’t apologize for slavery. He also claims, incorrectly, that Obama was born in Kenya.

He once tweeted a photo of himself standing with Geert Wilders, the far-right Dutch politician known for his anti-Muslim animus, with the caption “Cultural suicide by demographic transformation must end.”

And in March 2017, King tweeted: “Wilders understands that culture and demographics are our destiny. We can’t restore our civilization with somebody else’s babies.”

After that tweet, neo-Nazi Andrew Anglin wrote on his popular white supremacist site, The Daily Stormer, that “Steve King is basically an open white nationalist at this point.”

Corey Stewart is running for U.S. Senate in Virginia. He was narrowly defeated in a run for governor in the state after focusing his campaign on the preservation of Confederate monuments.

During his 2017 run for governor, Stewart made several joint appearances with white supremacist Jason Kessler, the organizer of the deadly Charlottesville rally.

After that rally, Stewart chastised his fellow Republicans for criticizing the white nationalists, saying violent people on the left were also to blame for the violence.

Rep. Matt Gaetz (R-Fla.) invited Chuck Johnson, a notorious far-right troll who has said he identifies with the alt-right, to the State of the Union in January.

Johnson is a Holocaust denier famous for being permanently banned from Twitter for threatening to “take out” a civil rights activist. He’s also helped raise money for Anglin, the Daily Stormer publisher.

“He is not guilty of the things that some people have charged him of as it relates to those claims,” Gaetz said of Johnson. “He’s a controversial figure, there are plenty of controversial folks at the State of the Union. I don’t just cavort with people who hold my views.”

Gaetz, up for re-election in 2018, is no stranger to extremists. In January, he was a guest on Alex Jones’ “InfoWars” program, despite Jones’ history of promoting wild conspiracy theories and making bigoted remarks about Jews and Muslims.

Rep. Dana Rohrabacher (R-Calif.) is also up for re-election in 2018, and also has connections to Chuck Johnson. The California congressman reportedly brought Johnson to Capitol Hill for a meeting last year. Johnson reportedly then helped arrange a meeting between Rohrabacher and WikiLeaks founder Julian Assange.

Rep. Lou Barletta (R-Pa.) is running for U.S. Senate in Pennsylvania. In 2006, when he was mayor of Hazelton, Pennsylvania, Barletta granted an interview to the American Free Press, the same anti-Semitic publication that Joe Arpaio has spoken to.

Barletta also once held a rally with musician Paul Topete, who is known for promoting anti-Semitic conspiracy theories.