The Hypocrisy Of Paul Ryan's Attack On Entitlements 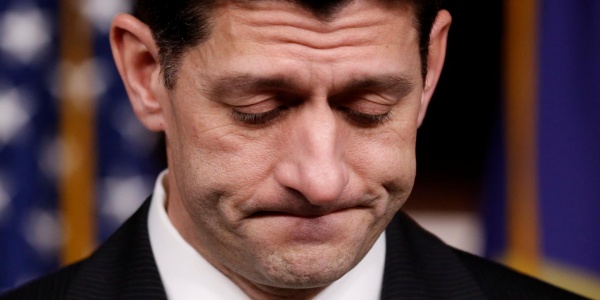 It's been some time since it has been revealed that Paul Ryan, Speaker of the House, paid for a good portion of his college tuition through Social Security.

Ryan, the GOP’s most outspoken advocate for cutting and privatizing Social Security, has benefited from Social Security himself, in the form of survivor benefits he received after his father’s untimely death. (His mother almost certainly also received social security benefits when Paul's father died.)

From the age of 16, when his 55-year-old father died of a heart attack until he was 18, Ryan received Social Security payments, which, according to a lengthy profile in WI Magazine, he put away for college. Were it not for this “entitlement program” Ryan benefitted from and now wants to cut, he may not have been able to afford to go to college.

He attended Miami University in Ohio to earn a B.A. in economics and political science and landed a congressional internship as a junior upon graduation. After serving as an intern, he worked for Congressman Kasten and, later, for Congressman Brownback. In fact, Ryan has spent most of his adult life on the taxpayer payroll, first being elected as a US congressman in 1998 and now serving his 19th year. He gets paid by the government more than $200,000 a year in his current role.

Ryan’s willing acceptance of government handouts didn’t stop when he was a teen and continues today.

In fact, Ryan's family business is a prime example of one that could not have thrived without government assistance: in the form of roads that allowed it to move its heavy equipment from site to site, government contracts (it cites "highway interchanges and entrance roads" as one of its earth-moving projects), and government zoning approval and incentives to businesses whose projects the Ryan Incorporated Central Works on.  That, by the way, is only what can be gleaned in likely government financial benefits to Ryan's extended family firm from their website.  Lord knows what an actual audit would turn up in government money adding to the firm's profit.

Now that he is an adult in a better financial position due to having a well-paid taxpayer-funded job, a wealthy wife, and an extended family business that has now prospered (his net worth is estimated at between $2.1 million and $7.8 million) you might think he would offer to repay the government for the assistance his family benefitted from. No way.

In fact, he continues to receive support in the form of a very generous health insurance policy and he is positioned to receive even more on the government's dime through the pension he will be entitled to receive when he retires.

Most Americans can only dream of the coverage Ryan has received because we pay for most of it.  According to the Annenberg Public Policy Fact Check:

In addition, members of Congress also qualify for some medical benefits that ordinary federal workers do not. They (but not their families) are eligible to receive limited medical services from the Office of the Attending Physician of the U.S. Capitol, after payment of an annual fee ($491 in 2007). But services don’t include surgery, dental care or eyeglasses, and any prescriptions must be filled at the member’s expense.

House and Senate members (but not their families) also are eligible to receive care at military hospitals. For outpatient care, there is no charge at the Washington, D.C., area hospitals (Walter Reed Army Medical Center and National Naval Medical Center). Inpatient care is billed at rates set by the Department of Defense.

That's some fat deal on healthcare, pension, and salary that Paul Ryan has had since 1998 on the taxpayers' tab in addition to his share of the profits from government-funded projects awarded to his family's business.

Ayn Rand, Ryan's heroine, calls the poor parasites. Perhaps it is the supreme hypocrisy and irony that Paul Ryan is parasitically living off the taxpayers' teat.