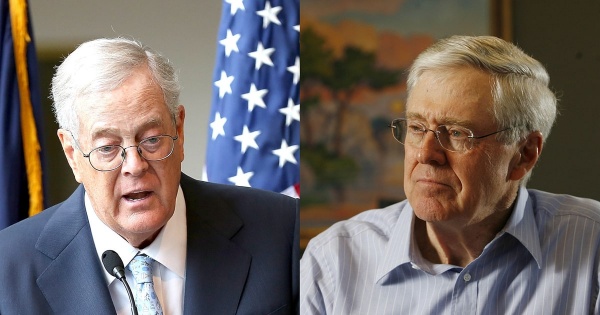 Two billionaire brothers who have poured their fortune into investing in the Republican Party have pledged to spend $400m in an attempt to thwart the Democrat surge in the midterms.

Charles and Davich Koch have ordered their network of conservative activists and donors to radically broaden its political scope in the lead up to this year’s midterm elections in order to safeguard Republican majorities in the House and Senate.

Around 550 Koch donors gathered at a five-star Indian Wells Resort and Spa in the California desert last weekend to discuss their plans for the forthcoming midterms and the tricky political climate Republicans are faced with.

The Koch brothers, who have invested in a network of charitable organizations that are committed to supporting Republican causes and candidates, are owners of Koch Industries. This is the second-largest privately run business in America.

Among other things, the Koch brothers own oil refineries in Texas, Alaska, and Minnesota and also control some 4,000 miles of pipeline.

The Koch network, one of the most powerful conservative groups in the US, plans to spend a whopping $400 million this cycle to elect Republican candidates and promote conservative causes.

This is not only 60 percent more than it forked out during the 2016 presidential cycle but also more than the combined resources spent by the Republican National Committee, the NRA and the Chamber of Commerce during the 2016 election cycle.

The Koch network’s 2018 investment comprises $20m to help sell the recent tax overhaul to an American public who remains skeptical via a spate of public rallies, phone banking and paid advertising.

“My challenge to all of us is to increase the scale and effectiveness of this network by an order of magnitude, by another tenfold on top of all the growth and progress we’ve already made,” Charles Koch said in a speech to the donors.

“If we do that, I’m confident we can change the trajectory of this country.”