Eighteen Unbelievable Moments That Occurred During The State Of The Union 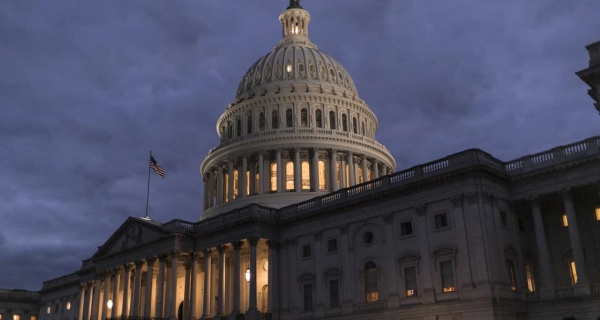 Congressman and grandson of Robert F. Kennedy will deliver the Democrats' rebuttal from Fall River, Massachusetts

The address was delivered in a charged House chambers: Many representatives and senators dressed in all black to support the #MeToo and #TimesUp movements. Invited guests included dozens impacted by president Trump's immigration policies, including Dreamers whose legal protections Trump revoked, refugees from "shithole" countries like El Salvador – whose temporary protected status Trump revoked – and family members of hardworking undocumented immigrants seized by Trump's deportation force, ICE, in a crackdown that was supposed to target only "bad hombres."

The speech was vintage Teleprompter Trump – underscoring the president's occasional ability to read soberly from a script, without lapsing into his more familiar insulting outbursts or simian dominance displays. But despite the presentable topspin, weird and unscripted moments flashed through.

Here are the 18 WTF moments from Trump's first State of the Union.

1. WTF, I thought it was his second State of the Union.
Yes, we all remember the president's first address to a joint session of Congress in February 2017. Trump turned the widow of a fallen Navy SEAL into a political prop – prompting CNN's Van Jones to gush: "He became President of the United States in that moment, period." But for reasons – dull, pedantic reasons – a new president's first speech to Congress is not recognized as a State of the Union. That makes Trump's 2018 address SOTU numero uno.

2. It was also America's first ever "State of the" Uniom
From the president who brought you the imaginary African nation of "Nambia," and the exacting White House staff that misspelled the name of the British Prime minister, the "opiod crisis," and the Nordic country, "Normway," the Trump administration offered members of congress official tickets to his "State of the Uniom" address. The typo prompted Democrat Rep. Raul Grijalva to tweet: "Just received my ticket for the State of the Union. Looks like @BetsyDeVosEd was in charge of spell checking." The Arizona Democrat referred to Trump's Secretary of "Educatuon," whose official Twitter feed once misspelled the name of black intellectual "W.E.B. DeBois" before tweeting "our deepest apologizes."

3. ...and the first ever SOTU with naming rights.
On the Monday before the speech, the president's re-election campaign rolled out a gimmick to sell naming rights to the State of the Union. Donors could pay to see their names float luminously over the "Official Donald J. Trump for President livestream" of the State of the Union. The sales pitch read: "This is a movement. It's not about just one of us. It's about ALL of us. Which is why your name deserves to be displayed during Tuesday night's speech" – all for the low, low donation of $35.

4. When Trump claimed Obama's job creation as his own.
In his speech, Trump wanted to boast about his impact on the economy. Trouble is, the American economy created only 2.1 million jobs in Trump's first year, a slowdown from 2016. To come up with what Trump called "tremendous numbers," he co-opted the last months of Obama's jobs record to declare: "Since the election, we have created 2.4 million new jobs."

5. When Trump left California out of his prayer for recovery.
Highlighting his commitment to survivors of America's myriad climate disasters in 2017, Trump was supposed to reassure "everyone still recovering in Texas, Florida, Louisiana, Puerto Rico, the Virgin Islands, California and everywhere else – we are with you, we love you, and we will pull through together." But in his speech, Trump skipped over California – the state where voters deprived him of a win the popular vote. (Trump did highlight a single Californian, David Dahlberg, a park ranger who'd saved almost 60 kids from wildfires, for praise.)

6. When Trump gave only a glancing mention to Puerto Rico.
Puerto Rico – where Americans still lack electricity, where recovery hasn't been fully funded by congress and where FEMA just announced it would stop delivering food and water – received a single mention in the State of the Union. Did you miss it? (Hint: reread WTF #5)

7. When Trump tried to pull one over on Black America.
Taking credit for job growth for black Americans that began under Obama (and has continued under Trump) the 45th president triumphantly declared: "African-American unemployment stands at the lowest rate ever recorded." The cameras then cut to black lawmakers. If looks could kill, Mike Pence would now be president.

8. When Trump said "Qweed" and "Scorge."
Teleprompted Trump is an adventure – in particular when it takes the president out of his typically fourth-grade vocabulary. Trump's speech presented him with the words "creed" and "scourge" – both of which escaped his lips as though he'd never said them out loud before.

9. When Trump called for an end to "chain migration."
Adopting the language of white nationalists, Trump called for an end to "chain migration," which he described as allowing "a single immigrant [to] bring in virtually unlimited numbers of distant relatives." The leader of the Republican Party – for generations the party of "family values" – is calling for an end to the long-standing American policy of "family reunification," which allows new citizens to sponsor only their immediate family members to immigrate to the United States. Today, the president's Slovenian in-laws – the grandparents of his son – are likely in the country by virtue of this law. Family reunification is also far from the easy process Trump describes. The immigration backlog means it now often takes a quarter century or more for a new citizen to get a green card for, say, her sister in Mexico.

10. When Trump demagogued immigrants.
Not once mentioning the DACA program that he has suspended, or the 800,000 hardworking young Dreamers he's placed in limbo, Trump spent much of his speech trashing immigrants, more broadly, as people who don't "contribute to our society" or "love and respect our country."

"For decades, open borders have allowed drugs and gangs to pour into our most vulnerable communities," Trump said. "They have allowed millions of low-wage workers to compete for jobs and wages against the poorest Americans. Most tragically, they have caused the loss of many innocent lives."

Trump then spoke of his "sacred duty" to "defend Americans" because "Americans are dreamers, too."

11. When Trump called his immigration demands a "down the middle compromise."
Trump's proposed immigration reforms would cut legal immigration in half. This is a bridge too far even top Republicans, who are calling the plan "bad for the economy."

12. When Trump praised ICE as "great, great... great, great."
Immigration and Customs Enforcement has been in the news frequently in recent weeks for moving to deport hard-working immigrant breadwinners, business owners and even doctors from their families and the country they've lived in since childhood. Trump heaped praise on ICE agents, calling them: "Great, great people. These are great, great people, who work so hard in the midst of such danger."

13. When Trump glossed over corporate downsizing and layoffs.
Trump touted businesses that have, in a synchronized PR campaign, offered employees one-time bonuses, in the wake of the GOP's permanent corporate tax cut, worth trillions of dollars America's richest businesses. "Three million workers have already gotten tax cut bonuses – many of them thousands of dollars per worker," Trump said. But Trump glossed over another long list of companies – including Walmart, Kimberly-Clark, Bank of America, Honeywell and Boeing – that have taken the tax cuts as a spur to slash jobs, close stores, hike fees and/or spend, bigly, on stock buybacks or dividend payouts to investors.

14. When Trump tried to sell a $200 billion infrastructure plan as being worth $1.5 trillion.
Trump insisted is is time to "time to rebuild our crumbling infrastructure." But in twisted language he called on Congress "to produce a bill that generates at least $1.5 trillion for the new infrastructure investment we need." The odd language is the result of a White House plan for just $200 billion in direct federal funding – which will somehow leverage state and private funds to drive another $1.3 trillion investment.

15. When Trump claimed victories in wars nobody knew we'd been fighting.
"We have ENDED the war on American Energy" declared Trump, adding: "We are now very proudly an exporter of energy to the world." Trump failed to note that the four-decade ban on oil exports was lifted by his predecessor, Barack Obama. Elaborating on the alleged armistice, Trump also insisted: "We have ENDED the War on BEAUTIFUL, CLEAN COAL."

16. When Trump pledged more Gitmo.
Trump appeared to hint a renewed rough treatment for terrorists captured on the battlefield: "Terrorists are not merely criminals," Trump said. "They are unlawful enemy combatants. And when captured overseas, they should be treated like the terrorists they are." Trump called on Defense Secretary Jim Mattis to "reexamine our military detention policy and to keep open the detention facilities at Guantánamo Bay."

17. When Trump extended an olive branch….
Trump is one of the most divisive presidents in modern memory yet at times his speech struck unexpected, unifying chords. "This is our new American moment," Trump said. "Tonight, I want to talk about what kind of future we are going to have, and what kind of Nation we are going to be. All of us, together, as one team, one people and one American family. We all share the same home, the same heart, the same destiny, and the same great American flag."

18) ...and then beat his opponents with it.
The flag was a warning sign. Trump soon pivoted back to his divisive rhetoric, calling out those who protest injustice and police brutality by kneeling during the national anthem. To do so, Trump highlighted the work of a child named Preston who has been marking the graves on Veterans' Day with American flags. "Preston's reverence for those who have served our Nation reminds us why we salute our flag," Trump said, "why we put our hands on our hearts for the pledge of allegiance," Trump added – now glaring at the Democratic side of the aisle – "and why we proudly stand for the national anthem."