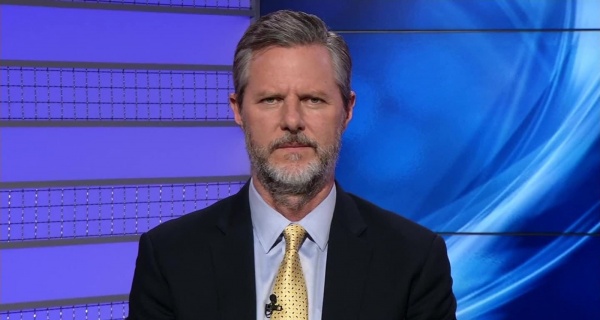 Falwell Jr., the son of legendary evangelist and Liberty University founder Jerry Falwell Sr., appeared on CNN Wednesday and was pressed by host Erin Burnett about Trump's past immoral behavior.

In addition to the report that Trump's lawyer paid off adult film star Stormy Daniels to keep quiet about an affair they had in 2006, Burnett questioned the 55-year-old president of the largest evangelical university in the U.S. about the several allegations of sexual misconduct against Trump.

"What confuses me and many others is you say you are about forgiveness but someone has more than a dozen women who has accused him of assault and unwanted touching. He has admitted to it on tape," Burnett said. "My question to you is how many times? If you stand for the issue of familial fidelity and integrity, how many times does it take before you say, 'This is a person who lacks character?'"

Falwell answered by arguing that the things that Burnett had mentioned happened years ago and claimed that the president has "apologized."

Burnett pointed out that Trump has not apologized for many of the accusations of sexual misconduct but has apologized for the Access Hollywood tape that came out in 2016 that showed Trump bragging that he gropes women.

"He is not the same person now that he was back then. I believe he has changed and Jesus said if you lust after a woman in your heart, it's the same as committing adultery, you are just as bad as the person who has," Falwell asserted. "That is why our faith is based around the idea that we are all equally bad, we are all sinners, we need Christ's forgiveness. That's why evangelicals are so quick to forgive Donald Trump when he asks for forgiveness for things that happened 10-15 years ago."

Burnett followed up by asking Falwell if he believes "all men are as bad or have done as many bad things as Donald Trump?"

"I think Jesus said that it's all the same, they all have the same hearts. He said that he who is without sin cast the first stone," Falwell responded. "He forgave the thief on the cross. He forgave the adulterers."

However, Falwell argued that Jesus "did not forgive the establishment elites."

"Those were the ones He said were a generation of vipers, hypocrites and they were the ones He came down hardest on — the religious elite of his day," he contended. "I think that is where we need to understand that evangelicals if they are anything, they are anti-establishment. That's why the Protestant Reformation [happened] — they split off the Catholic Church — that's why they left Europe to come to the United States, that's why they fought the Revolutionary War."

Falwell's comments did not sit well with some Christians on social media, who accused Falwell of mangling the Gospel.

".@JerryFalwellJr argued tonight that we can't measure our leaders' character because our sins are 'all the same' and we're all 'equally bad.' This moral relativism falsely suggests that we're incapable of telling good from evil, absolving our leaders of any expectation of virtue," Evan McMullin, a 2016 independent presidential candidate who was considered a favorite among some Christian conservative NeverTrumpers, tweeted.

"And where there is no virtue in leadership because there is neither good nor evil, all that's left is the pursuit of power by any means. Might makes right and chaos ensues."

Paula Bolyard, a Christian conservative and supervising editor at PJ Media, voiced her outrage in a series of tweets after watching the Falwell interview. She called Falwell's version of Christianity "fake" and suggested that is "Why I don't call myself an Evangelical anymore."

"Falwell would have you believe that 'Judge not lest ye be judged' means we can't ever differentiate between sin and non-sin," Bolyard wrote. "WRONG again. 'Do not judge by appearances, but judge with right judgment,' said that super judgy Jesus."

"The Apostle Paul warned about men who twist God's words: 'If anyone is preaching to you a gospel contrary to the one you received, let him be accursed,'" she wrote in another tweet. "What Falwell is selling is not the gospel of Jesus Christ, it's a man-centered political movement."

Falwell's comments come on the heels of Family Research Council President Tony Perkins, another evangelical leader who informally advises the Trump administration, telling a Politico podcast this week that the evangelical community has sort of given trump a "mulligan" or a "do-over" when it comes to his past behavior.

Evangelist Franklin Graham was also pressed by CNN this week for continuously defending Trump. Graham noted that while he doesn't give "anybody a pass," Trump has denied the Stormy Daniels affair. Moreover, Graham noted, the alleged affair was said to have happened over a decade ago and Trump has "changed" since then.