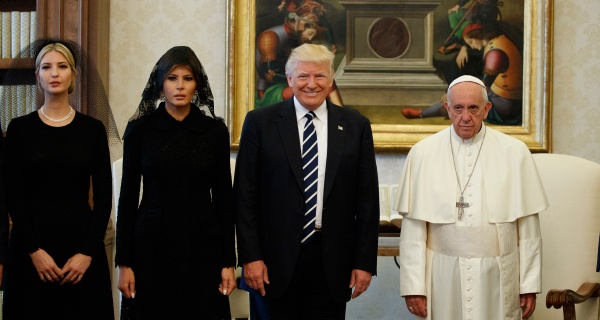 Pope Francis has weighed in on ending the “fake news” problem in a new official document and said the original example of it was the Bible story of the devil, disguised as a serpent, tempting Eve to eat the forbidden fruit.

He said she was fed wrong information by Satan, who told her the fruit would make her and Adam as all-knowing as God.

"Fake news is a sign of intolerant and hypersensitive attitudes and leads only to the spread of arrogance and hatred. That is the end result of untruth," the Pope said in a document called "The truth will set you free - fake news and journalism for peace".

The document was issued at a time when what role false news reports may have played in the 2016 election win of US President Donald Trump is continuing to be examined.

Mr. Trump has said he came up with the term “fake news” and has used it numerous times, particularly on Twitter, in order to discredit mainstream media’s reporting about his administration.

However, the Pope’s document does not name the President or his rampant use of the term as an insult to those attempting to report the truth.

The document also did not delve into the allegations against Russia for hacking elections in the US and possibly other countries like Germany and France, through the creation and promotion of false news reports on various social media channels.

The pontiff condemned the "manipulative use of social networks" to “influence political decisions, and serve economic interests” as well.

Pope Francis said that the “fake news” phenomenon is rooted in “appealing to stereotypes and common social prejudices and exploiting” those emotions, particularly anger.

He also mentioned that even with denials from trusted authorities, those types of reports spread because of the emotional appeal and it led to many “unwilling accomplices” in spreading the unfounded claims.

The pontiff also expressed his view on journalists’ role in stemming fake news - calling them the "protectors of news."

Journalism is "not just a job, it is a mission," Pope Francis wrote.

"We need to unmask what could be called the 'snake-tactics' used...to strike at any time and place," he had warned in the document.

Vatican spokesman Greg Burke told Reuters Television: "The Pope is not saying that all journalists are snakes but he is certainly acknowledging that they can be."

"This biblical episode brings to light an essential element for our reflection: there is no such thing as harmless disinformation; on the contrary, trusting in falsehood can have dire consequences," Pope Francis wrote.

The Pope urged reporters to remember people are the center of stories, not speed or clicks.

He said he hoped the news industry as a whole would be "less concentrated on breaking news than on exploring the underlying causes of conflicts ...a journalism committed to pointing out alternatives to the escalation of shouting matches and verbal violence."

The document was issued in relation to the Vatican's World Communications Day on 13 May. It was released 24 January to mark the feast of Saint Francis de Sales, the patron saint of journalists.