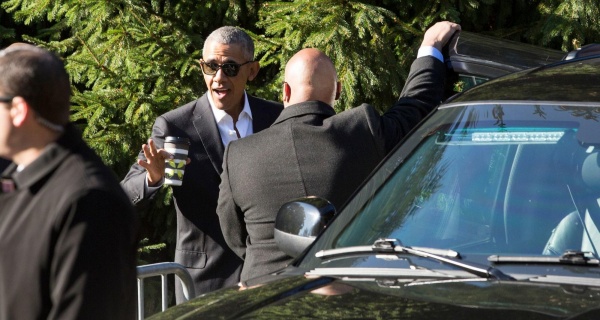 A year after leaving the White House, former president Barack Obama has been on the go, writing a memoir, giving paid speeches, passing the plate for his future presidential center in Chicago and even making a stop in the city for jury duty.

Some of his closest allies predict he’ll ratchet up his activities during his second year off the job, even if specific plans remain under wraps.

He’ll “continue to be politically active in 2018, with more endorsements and more campaigning,” his spokeswoman Katie Hill said. Still, he won’t maintain such a high profile, lest he risk taking political oxygen away from Democrats in a critical election year, associates said.

Obama likely won’t ever take a day job, they said, and will keep carefully picking his spots when he disagrees with President Donald Trump, who has moved quickly to undo an array of Obama measures.

A year after handing over the keys to the White House, the country’s 44th president is, in the words of former top strategist David Axelrod, “liberated.”

“He must feel 100 pounds lighter,” said Axelrod, who leads the University of Chicago’s Institute of Politics. “He is still deeply concerned about the world, and the things that always concerned him, but there’s something to be said about not having those red phones around him, metaphorically speaking.”

Where he’ll put down roots, though, remains an open question. If the schedule holds, he’s likely to be back in Chicago in 2018 to break ground for his presidential center, but has made his home in Washington for the last year.

The Obamas stayed in the capital so daughter Sasha can finish high school there in 2019. Their $8.1 million residence in Washington keeps them anchored on the East Coast, as does older daughter Malia, a Harvard freshman.

Hillary Clinton’s latest book said the Obamas as far back as 2013 mused about moving to New York, and Axelrod said he’s heard a lot of speculation about where the family will settle.

“I expect we’ll see a lot of him in Chicago, but where his mail shows up, I don’t know,” he said.

Obama, 56, was not the first to leave the Oval Office in his prime. Bill Clinton, now 71, and Jimmy Carter, 93, likewise left the office in their mid-50s and have had long post-presidential careers. In visits last year to more than a dozen foreign countries, Obama met with foreign dignitaries but routinely carved out time to engage with youth.

“I’m really obsessed now with training the next generation of leaders to make their mark on the world,” he told the U.K.’s Prince Harry in September.

The former CEO of Chicago Public Schools said the meeting in the Roseland neighborhood with about 25 men was an emotional one. Many of the men had been shot, some had served prison terms and none had fathers in their lives. Obama’s passion for mentoring young people and bolstering tomorrow’s leaders arises because he identifies with them, according to Duncan.

Duncan said Obama has shared with him a prophecy — one he at first thought was “a little crazy.” Obama said he thought what he could do to help young people over the next 25 or 30 years “could actually be more impactful than the eight he was president.”

“If he can really help train a generation of not hundreds, but thousands of leaders, not just domestically but internationally,” Duncan said, “you think about the ripple effect not just over the next 25 years, but over the next 50 years.”

Altogether, Obama traveled to Chicago at least seven times since the 2017 inauguration, not counting trips he may have made under the radar. Obama and former first lady Michelle Obama “are still obviously deeply committed to Chicago,” said Hill, his spokeswoman. “It’s near and dear to his heart and it’s where the foundation is headquartered, and the work there … is going to scale up dramatically in the coming months and years.”

Plans call for his presidential center to open in Jackson Park in 2021.

“It’s his intent to create a global platform for civic engagement, so as his travels take him around the world, it’s important for him to engage with young people before the bricks and mortar of the Obama Center are completed,” said Valerie Jarrett, a former top Obama White House adviser, now an unpaid adviser to the Obama Foundation.

When the former president was in Chicago last month for Mayor Rahm Emanuel’s summit meeting on climate, Obama said it is hard to address climate change “in an unusual time” but never mentioned Trump by name.

On major issues important to him, Obama has challenged Trump publicly. He’s defended the Affordable Care Act, spoken in favor of protections for so-called Dreamers and criticized the new administration for abandoning the Paris climate agreement.

Obama respected the latitude shown by former Republican Presidents George H.W. Bush and George W. Bush, Axelrod said, “So he has resisted commenting on Trump except around specific policy concerns and then only very rarely. I don’t think you have to be Sherlock Holmes to decide he’s got big differences (with Trump), but … he’s going to be measured about how he publicly expresses himself.”

Jarrett, like others, is reluctant to address how Obama regards Trump, whose administration has targeted many of the ex-president’s policies and priorities, such as trade pacts, net neutrality, an expansion of national monuments and improved relations with Cuba.

Former Obama spokesman Ben LaBolt said the former president also has largely stayed out of the fray to “leave space for the next generation of Democratic leaders to emerge.” Observed Axelrod: “To the extent he (Obama) is the point man on some sort of resistance, he is retarding the ability of other leaders to step forward as they should.”

Talking about his new life, Obama told Prince Harry that he sleeps later and has become reacquainted with traffic and after experiencing the presidency’s “accelerated” pace and “constantly full inbox,” everything “still feels to some degree like it is moving in slow motion.”

Meantime, he has enjoyed ample “island time” in places from the British Virgin Islands to Bali.

“He’s an Illinoisan by choice and a Hawaiian by birth,” Axelrod said. “That’s the environment in which he grew up. He loves the warm weather, he loves the beach and he loves the water.

“There were limits to what you could do as president, because you had a lot to do.”

Axelrod, like others, rules out a “day job” for Obama. “Eight years in the White House isn’t like any other job,” he said. “Those are ‘dog years.’ It’s pretty tough to adapt to another job once you’ve been president. Only past presidents know completely what the demands of the job are.”