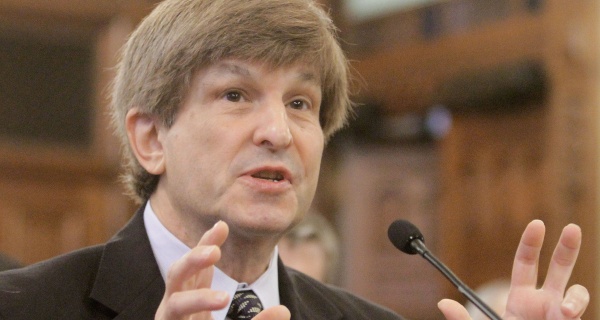 Historian Allan Lichtman is known for making accurate predictions — and he’s more certain than ever that President Donald Trump will be impeached this spring.

The American University history professor has correctly predicted the winner of every presidential election since 1984, including Trump, and he has recently updated his book, The Case for Impeachment, that was released in April — before the president fired FBI director James Comey and special counsel Robert Mueller was appointed.

He said the special counsel investigation almost certainly had more damning evidence of illegal cooperation between the Trump campaign and Russia, which he said would soon be revealed.

“It’s a conspiracy,” Lichtman said. “I believe we have the tip of the iceberg of what the special counsel knows about the relationship between Trump and the Trump team and the Russians. There’s a fair chance that the reason they were covering up all of those calls from then to be national security adviser with the Russians was to cover up a possible quid pro quo, the Russians will help us and in turn we’ll ease those sanctions. Why else make those calls and why else lie about them?”

The historian said the public had already seen strong evidence of obstruction, but he said there’s plenty of reason to predict charges on a “host of crimes” — some of them deadly serious — related to a Russian conspiracy.

“I wouldn’t keep saying collusion isn’t a crime,” Lichtman said. “Of course not, but taking things of value from foreign nationals is a crime, aiding and abetting illegal computer hacking is a crime, negotiating as a private citizen with a hostile foreign power with which there is disputes is a crime. If this is serious enough, and I’ve taken a lot of flak for that, I think there even could be charges of treason. After all, Russia was waging war against us — not a war with bombs and bullets, but a cyber attack, an online attack designed to destroy democracy.”

Sen. Jeff Flake (R-AZ), who has compared Trump to Stalin, told MSNBC that he still wouldn’t vote to impeach the president — but Lichtman said the public would eventually see evidence that would force Republicans to act.

“Talk about premature — how could he know whether or not he would vote to impeach when a case hasn’t been made yet?” Lichtman said. “He hasn’t been impeached and there hasn’t been a trial in the Senate. I think Mueller — and this is my prediction — is going to come up with findings that are going to shock the country, not only involve conspiracy with Russia but could involve serious financial crimes.”