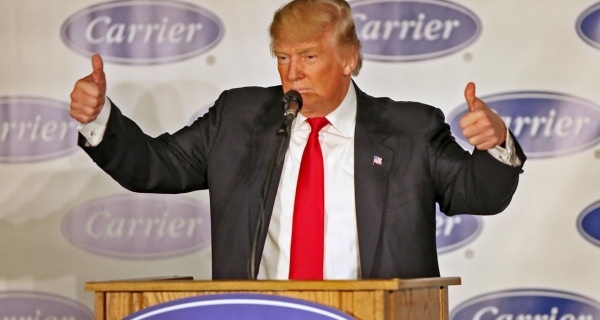 Last night, at Sully’s Bar & Grill, which sits across the street from the Carrier Corporation’s furnace plant, on the west side of Indianapolis, and serves as the de-facto company bar, two of Carrier’s soon-to-be-laid-off longtime employees had a drink and talked about how they got there. Today, the profitable H.V.A.C. company, owned by United Technologies Corporation—a federal contractor whose climate, controls, and security division, of which Carrier is a part, reported three billion dollars in operating profit in 2016—is letting go of more than two hundred employees in its second and final wave of Indiana-based layoffs, which began last July. In total, the company will be laying off more than five hundred employees as it moves manufacturing jobs to Monterrey, Mexico. Many of those employees voted for Donald Trump, who made saving Carrier’s “big, beautiful plant” one of his most repeated campaign promises. It was part of his broader preëlection claim that “A Trump Administration will stop the jobs from leaving America.”

That promise is the main reason that the soon-to-be ex-Carrier employees Renee Elliott and Duane Oreskovic voted for Trump, they told me yesterday. Elliott, a divorced mother of two who will turn forty-five next week, and Oreskovic, who is thirty-eight and single, both earned nearly eighteen dollars an hour making A90 furnaces at Carrier, where they worked their way up from entry-level jobs over the past five years. Neither possesses a college degree, and their jobs afforded them middle-class lives: Elliott is paying a mortgage on a house in Indianapolis, and Oreskovic said that he “could go out and enjoy myself when I wanted, play some pool.” When Carrier announced the planned layoffs, in February of 2016, on what many employees soon began calling “D Day,” their financial futures suddenly came into question. Then, in the run-up to the election, Trump seemed to offer a solution, with his tough talk about stopping the flow of American jobs to other countries, including Mexico.

“We took him serious,” Elliott said, tearing up as she sat in a booth at Sully’s, “because he did seem to be an entrepreneur. He knew this offshoring shit was gonna go down, and ‘I’m not gonna stand for it’ is the way he made it sound. Hillary never said a word to us or about us. Obama never flew Air Force One to our facility, like he did to one in Elkhart, Indiana, when he was campaigning. I thought, This man is not gonna be anybody’s puppet.” Elliott went on, “It was an easy vote for me. Not just because of ‘The Apprentice.’ We believed in him here at Carrier. The vast majority of us. It was Trump deluxe in there. I told people, ‘He’s gonna find a cause somewhere. He’s gonna be a savior.’ Little did I know the cause was gonna be us.”

Hundreds of Carrier jobs will remain in Indianapolis, but Elliott and others argue that those jobs—many of them office-based, not on the manufacturing line—were never in jeopardy. “Trump saved some jobs,” Elliott insisted. “He didn’t save mine, but he did save some.” She sighed. “Just don’t bullshit us. We never thought the office personnel was going anywhere, anyway. They’re not making units. We are. We’re the ones that made the $9.7 billion that they collected.” She went on, “We can understand companies having to go overseas if they’re losing money. We get it. But Carrier is the top A.C.- and furnace-making company in the nation, getting money hand over fist.”

Elliott, who plans to file for unemployment insurance, doesn’t think that anything can save her job now, at what she called “the eleventh hour.” Still, she said that she wouldn’t be silent about “the two hundred and sixty-one families affected this week.” And the area businesses, too. “The Chinese restaurant on the corner,” she said. “The Quick Stop. This place, Sully’s. After a shift, especially on the nights, it looks like a ‘Gin and Juice’ video, a Snoop Dogg video here: we’re all outside shooting dice, playing cards, drinking, visiting, commiserating. We were really a family. It’s not just that I’m a lost paycheck away from homeless now. I will never find a job like this one again.”

For years, Oreskovic has worked the same shift as Elliott, from five in the afternoon until three-thirty in the morning. The summer before last, they went to a Vanilla Ice and Tone Loc concert together. He sat near her at Sully’s, wearing a yellow and purple baseball hat—“our union colors,” he said—with two middle fingers stretched above its bill. The hat’s message, he explained, “is corporate America, you’re ‘No. 1.’ ” Oreskovic allowed himself a chuckle. “I voted for Trump,” he told me. “Financially, I thought he’s a genius. I said, ‘Well, America’s in debt; maybe he can do something and turn the economy around.’ Obviously, it’s not looking that way. Mr. Trump didn’t do his research and made himself look silly in front of the nation when these layoffs and early retirements began.” He mentioned Senator Bernie Sanders, whose populist message made him Hillary Clinton’s main challenger for the Democratic Party nomination. “In retrospect, I would have voted for him if I could do it again.” Oreskovic said that he was throwing a party after his last shift ends, “because I don’t want to wallow in it anymore.”

After that, his most likely path is to go back to school, he said, “for welding. Maybe look into some other fields.” Unlike Elliott, though, Oreskovic still clings to some small hope that his Carrier job can be saved. “All Trump has to do is sign an executive order so our jobs don’t go across the borders or across the seas! Just sign the piece of paper. It’s either a yes, he’ll do it, or a no, he won’t.” He went on, “If it’s a yes, Trump is gonna be a hero here. If it’s a no, he’s gonna be our enemy, unfortunately.”

Later in the evening, organizers with Good Jobs Nation, a Washington, D.C.-based labor-advocacy group, and a handful of local Democratic politicians and political hopefuls stood before a small crowd at Sully’s and denounced Trump and Vice-President Mike Pence, Indiana’s former governor. Obscenities were liberally employed. The most pointed denunciation came from Chuck Jones, the former president of United Steel Workers Local 1999, in Indianapolis, who disputed Trump’s initial characterization of the Carrier deal and was targeted by Trump on Twitter as a result. “Trump is a liar and an idiot,” Jones told the crowd, adding, “He’s a con man, pure and simple, who sold us a bag of shit.” Sitting behind Jones, Oreskovic and Elliott nodded. The audience clapped. When it was over, Oreskovic went outside for a smoke.