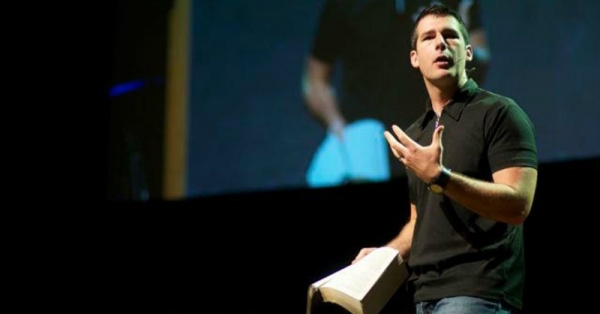 On Dec. 1, as headlines across the country blared with news about Matt Lauer’s surprise firing from the “Today” show for sexual misconduct, a woman named Jules Woodson tapped out a short email. It ran only about 80 words but was nearly 20 years in the making. “Do you remember?” the subject line read.

“Do you remember that night that you were supposed to drive me home from church and instead drove me to a deserted back road and sexually assaulted me?” Woodson wrote. “Do you remember how you acted like you loved me and cared about me in order for me to cooperate in such acts, only to run out of the vehicle later and fall to your knees begging for forgiveness and for me not to tell anyone what had just happened?”

She closed with three words and a hashtag. “Well I REMEMBER,” the email said. “#me-too.”

The message landed in the inbox of Andy Savage, a pastor at Highpoint Church, an evangelical Memphis mega-congregation that draws more than 2,000 Sunday worshipers. The 42-year-old checked all the right boxes for a rising minister: biblically trained, handsome and CrossFit-cut; an attractive wife and five young sons; social media savvy and unafraid of speaking on topics such as sex. Savage’s career had begun as a college student working at a church outside Houston, a congregation Woodson attended as a high school student.

When Savage failed to respond to Woodson’s December email, she took her allegations public on Jan. 5, posting a detailed account of the alleged sexual assault on a blog for abuse survivors. Evangelical circles started spinning with reports of a then-college student forcing a sexual encounter with a student.

Yet instead of following the course of so many recent sexual harassment scandals — reports that have toppled careers in Hollywood, media and politics — Savage’s public outing seems to have failed to upset his position. In a message on the church’s website, he admitted to a “sexual incident” with a high school student at the time. Highpoint’s main pastor, Chris Conlee, also released a statement supporting Savage. And last Sunday, the pastor addressed his congregation about the allegations, but provided little detail.

“In hindsight, I see more could have been done for Jules,” Savage said, according to video. “I am truly sorry more was not done. Until now I did not know there was unfinished business with Jules. So today, I say, Jules I am deeply sorry for my actions 20 years ago.”

As Savage finished his remarks, he was greeted with a 20-second standing ovation from Highpoint’s congregation.

“His apology isn’t enough because number one, he’s lying about how he handled it,” an unsatisfied Woodson told Memphis’s Action News 5. “He never came to me, the church told him he couldn’t talk to me and they told me I couldn’t talk to him,” she explained.

Savage did not immediately respond to a request for comment.

But Savage’s situation tracks with a larger tendency within the evangelical community, according to Christa Brown, an expert on church abuse scandals and coverups. “Religious leaders use forgiveness theology as a cover, and as an avoidance, of accountability,” Brown told The Washington Post. “And it’s a way of further shaming victims. ‘What a bad girl you are, you aren’t forgiving.’”

According to Woodson’s account, in spring 1998 she was hanging out with a group of kids at their church near Houston, Woodlands Parkway Baptist Church, which is now known as Stonebridge Church. Savage, the youth minister, was also there. After the others left, Savage offered to take the 17-year-old high school senior home.

“It was dark outside,” Woodson wrote. “As he was driving me toward my home, he passed the turn he should have made to go to my house. I asked him where he was going. I don’t remember his exact response, but it was something along the lines of ‘you’ll see’ or ‘it’s a surprise.’ I know for sure he did not tell me where he was taking me. I remember feeling special and excited, as in my mind, he obviously wanted to spend more time with me before taking me home. I assumed we were going to get ice cream.”

Savage pulled into an isolated area and parked the car. He then exposed himself to Woodson and had her perform oral sex on him, she said. Savage also fondled her breasts, Woodson wrote. After five minutes, Savage abruptly stopped. “I remember him pleading, while he was on his knees with his hands up on his head, ‘Oh my god, oh my god. What have I done? Oh my god, I’m so sorry. You can’t tell anyone Jules, please. You have to take this to the grave with you,” Woodson wrote. “My fear and shame quickly turned to anger. I had just been manipulated and used. I swore to him I wouldn’t tell anyone just to get him to stop,” she added. “We both got back in the truck. As he drove me home, I don’t remember there being any conversation. I was in shock.”

Even though she was consumed by “fear, shame, anger and hurt,” Woodson told church leaders about the incident. They told her not to speak to Savage while they handled the situation. But the church took no action. Woodson then confided what had happened to other women in the congregation. Finally, the church’s leaders announced Savage was leaving.

“The church, however, never came out with an official statement addressing what had happened and/or what was being done about it,” Woodson wrote. “Instead, they held a going away reception for Andy at the church in which he was allowed to simply say that he had made a poor decision and that it was time for him to move on from our church.”

In his statement on the incident, Savage said he had “shared every aspect of this situation” with his wife before they were engaged. “I further disclosed this incident to Chris Conlee before coming on staff at Highpoint and have shared with key leaders throughout my tenure,” Savage wrote. In his own statement, Conlee confirmed the “information is not new to me or to our leadership.”

Despite the congregation’s support of Savage, repercussions from Woodson’s story have hit elsewhere.

Larry Cotton, one of the pastors in whom Woodson confided in 1998, was put on leave at his current church in Austin pending an investigation, the Memphis Commercial Appeal reported. Bethany House, a Christian book publisher, announced Monday it was canceling the publication of Savage’s upcoming book, “The Ridiculously Good Marriage.” Woodson also told the New York Times she has reported the 1998 incident to law enforcement in Texas.

“Faith can be a very powerful thing, and power without accountability is a dangerous thing,” church abuse expert Brown told The Post. “While evangelicals profess great faith, I think they are also effectively dismissive of their faith’s power because, if they actually recognized the power that they afford to their faith leaders, they would demand the implementation of accountability structures. It’s what responsible organizations do.”