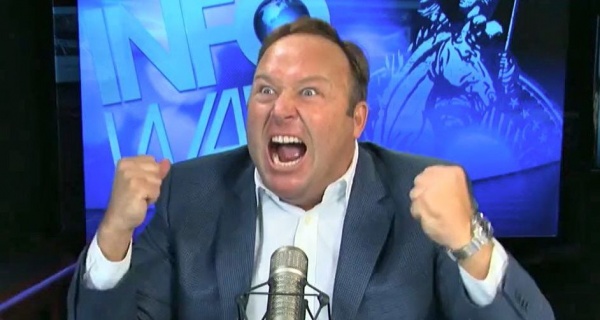 Oprah Winfrey’s Golden Globes speech has led to a great deal of speculation of a 2020 presidential run (a notion that was later fueled by her longtime partner, Stedman Graham). Then NBC didn’t make the best judgment call by tweeting a Winfrey GIF with what could be interpreted as an endorsement. This riled up Donald Trump Jr. to an understandable degree, but further down the outrage spectrum, Alex Jones is predictably losing his mind.

As New York Washington correspondent Olivia Nuzzi noted on Twitter, Jones is practically treating Oprah as a Democratic nominee by attacking her (attempting to link Winfrey with Harvey Weinstein’s sexual misconduct by posting award show photos, a tactic echoed by the Tucker Carlson-founded Daily Caller website). And during a Monday InfoWars broadcast, Jones went on a paranoid rant about “globalist” Winfrey, who he (of course) calls a “top eugenicist” and someone who wants to push her own religion to brainwash kids or something. Then he got really racially charged:

“Well they’ve readied her to run against Trump in 2020 and to fire that campaign up in about a year. But we know the secrets about Oprah Winfrey that they don’t want you to know … We’re going to break down why Oprah Winfrey will never be elected president of the United States because of the skeletons in her closet.

“They want to call Trump a Nazi? Look out, lady, we know what you’re designed to do. You’re the black face to carry out the enslavement of black folks and everybody else.“

Jones’ fury extended into his Twitter feed, where he sent a now-deleted tweet that also referred to Winfrey as “an absolute anti-human, Nazi troll.” He’s making no sense, per his usual routine, but Jones is at least clearly communicating that the far-right is freaked out enough to consider Winfrey a threat to a second Trump term. And no matter what Oprah decides, we’ll probably see at least a few more months’ worth of speculation before she shuts it down or confirms a probable run.