The Trump Russian Scandal Is Far Greater Than Collusion 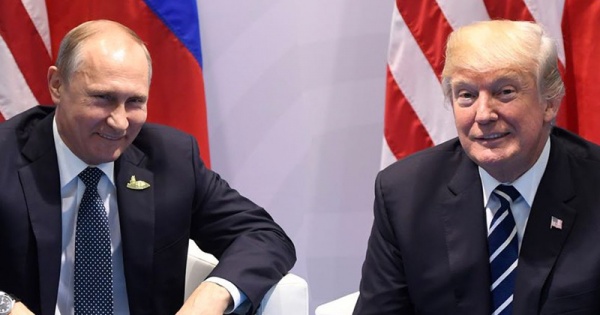 Last May, a top White House national security official met in Washington with senior Russian officials and handed over details of a secret operation Israel had shared with its U.S. counterparts. The meeting shocked veteran U.S. counterspies. The American official was not arrested, and he continues to work in the White House today, albeit under close scrutiny.

That official, of course, was Donald Trump. The president’s Oval Office meeting with Russia’s foreign minister, Sergey Lavrov, and its then-ambassador to Washington, Sergey Kislyak—which only Russian photographers were permitted to record—sparked a media brushfire that was quickly overtaken by more revelations of secret contacts between Trump associates and Kremlin agents. But the incident was not forgotten by American and Israeli security officials, or by longtime foreign intelligence allies of the U.S., who now wonder if the president can be trusted to protect their most guarded secrets.

For over a year, the question of collusion has driven various investigations into what’s become known as Russiagate. Special counsel Robert Mueller has been pursuing questions of whether Team Trump, which included the president’s son Donald Jr. and son-in-law, Jared Kushner, actively coordinated the Trump campaign with the Kremlin to hurt Hillary Clinton in the 2016 election. That suspicion was bad enough, but now a far more grim consensus is developing in the topmost circles of the U.S. national security establishment: The president has become a pawn of America’s adversary, Russian President Vladimir Putin. It’s a nightmare scenario even the writers of House of Cards would have discarded as implausible.

Until now. In a December 18 interview on CNN, retired Air Force Lieutenant General James Clapper, the former director of national intelligence, virtually called Trump a Putin puppet. The Russian president, Clapper noted, is a former KGB “case officer,” or spy recruiter, who “knows how to handle an asset, and that's what he's doing with the president. That’s the appearance to me.” (Pressed to clarify his “asset” comment, Clapper said, “I’m saying this figuratively.”)

“Wow,” tweeted former CIA Russian hand John Sipher. “The rest of us try to find other clever ways to say the same thing. Good on him for having the courage to call out Putin’s behavior. Our president shouldn’t have fallen for it.”

Veteran spy handlers have judged Trump an easy mark for Putin, who spent years in the KGB sizing up and exploiting a target’s vulnerabilities. They note how easily he falls for praise, as when Putin thanked him and the CIA for helping him thwart a bomb attack plot in St. Petersburg. “POTUS is a [spy] handlers’ dream,” Asha Rangappa, a former special agent in the FBI’s counterintelligence division, said. “He responds, without fail, to praise and flattery and telegraphs his day-to-day thoughts on Twitter. Likewise, said Harry “Skip” Brandon, a former FBI deputy assistant director of national security and counterterrorism. “He often very publicly states he goes by his instincts. If that is accurate, he may be the ultimate unwitting asset of Russia.”

And so on. The steady drip of revelations emerging from multiple Trump investigations—his business deals with Russian investors, his associates’ many undeclared meetings with Kremlin agents, his resistance to accepting evidence of Russian meddling in the 2016 election and his indiscretion with Israeli intelligence—draws a far darker picture.

Some veteran intelligence operators think it’s well past time to shift the narrative on Trump’s disturbing affinity for Putin, which the president insists is innocent and good for world peace. “Everyone continues to dance around a clear assessment of what’s going on,” says Glenn Carle, a former CIA national intelligence officer responsible for evaluating foreign threats. “My assessment,” he tells Newsweek, “is that Trump is actually working directly for the Russians.”

The Israelis can’t say they weren’t warned. In January 2017, a few weeks before Trump’s inauguration, top U.S. intelligence officials welcomed a delegation of their Israeli counterparts to Washington. The meeting proceeded uneventfully, according to veteran Israeli intelligence journalist Ronen Bergman, although the Americans vented their dismay over a president who had loudly disparaged their past work. “Just as their meeting was wrapping up,” according to Bergman and a later report in Vanity Fair, “an American spymaster solemnly announced there was one more thing: They believed that Putin had ‘leverages of pressure’ over Trump.” His advice: “Be careful.”

Five months later, the Israelis came to rue what they had shared with Trump’s new CIA director, former Republican Representative Mike Pompeo. They were astonished to read media reports that Trump had told the Russian foreign minister and ambassador about their top secret operation in Syria to penetrate a cell of the Islamic State militant group (ISIS). U.S. intelligence experts assumed the Russians had shared the information with their allies in Iran, Israel’s mortal enemy.

Clapper, now writing a book about his intelligence career, told Newsweek by email that “the Israelis were/are upset about it, since it proves once again we can’t be trusted to keep the secrets we share with them.

”Some of America’s closest intelligence allies were also upset by Trump’s leak, a top former national security official tells Newsweek, on the condition he not be identified when discussing such sensitive issues. “I hear the Brits are reluctant to share” intelligence on Russian subversion, he says, “not as much for security reasons as for political—they don’t wish to get crosswise with [Trump].”

Another analyst, Joseph Fitsanakis, co-editor of the Intel News blog, said relations between the U.K.’s spy chiefs and the Trump administration “are extremely tense.” During the 2016 campaign, he recalled, Trump riled London with an unsubstantiated claim that its version of the National Security Agency, the Government Communication Headquarters (better known as GCHQ), had eavesdropped on his communications. He refused to apologize.

Lower-level U.S. and foreign intelligence officials customarily find ways to deal with such high-level friction. But Trump’s repeated attacks on NATO have not only frustrated Washington’s closest allies but also raised questions as to whether the president has been duped into facilitating Putin’s long-range objective of undermining the European Union. “Some Western European colleagues are saying that sharing has been strictly limited to [counterterrorism] and some maritime [intelligence],” Fitsanakis says. “There's almost no sharing on Russia.

”How Trump’s attacks on “radical Islamic terrorism” will play out in the CIA’s relations with the spy services of Arab, African and Asian nations is not known. Historically, Langley has relied on such local partners to share its insights and intelligence on militant groups—sometimes to its regret when double agents wormed their way into their ranks.

Israeli officials uncharacteristically howled publicly about Trump’s “betrayal” in May and have only recently calmed down. Still, their anger could be detected months later, when a former Mossad deputy director, Ram Ben Barak, did an interview with The Cipher Brief’s Kim Dozier. “The rule is, if I give you information to help you, you do not give this information to another side without my permission,” Ben Barak said. “I am sure he will not do it again because, you know, it hurts the relationship.

”But all signs point to Trump not caring who gets hurt if it serves his interests—and vanity. Despite constant evidence of Russian interference throughout the summer of 2016, culminating in a January report by Clapper and Jeh Johnson, his Department of Homeland Security counterpart, saying the Kremlin had worked to put Trump in office, the president evidently permitted his incoming national security adviser, Michael Flynn, to intrigue with the Russians over lifting sanctions—and apparently didn't care enough to fire him after learning Flynn had lied about it to the FBI. Flynn’s later indictment and plea deal, Trump tweeted, was “a shame because his actions during the transition were lawful. There was nothing to hide!

”All this was going on, despite an explicit warning from the FBI to Trump soon after his nomination about potential espionage threats from Russia, according to NBC News. FBI agents also visited longtime Trump spokeswoman Hope Hicks only days after the inauguration, saying that certain named Russian agents were trying to penetrate the new administration. Hicks, who says she forwarded the warning to White House counsel Donald McGahn, has not been accused of any wrongdoing.

Continually jousting with Trump over his denial that any of this amounted to “collusion” with the Russians is a distraction, say veteran intelligence hands. It amounts to looking for an explicit quid pro quo that may not exist. It misses, moreover, “what is right under our noses,” wrote Rangappa, the former FBI counterintelligence agent, along with Sipher, the onetime CIA Moscow station chief, and Alex Finley, a former CIA operations officer, in a joint piece for the Just Security website. “There is no question that Russia made multiple, unprecedented attempts to penetrate a U.S. presidential campaign, that its approaches were not rebuffed, and that its contacts were sensitive enough that everyone, to a person, has concealed them.

“These facts might never be adjudicated inside a courtroom,” they added. “They may not even be illegal—but they present a clear and present national security threat that we cannot ignore.