Why Michael Wolff's Book Is Good For America 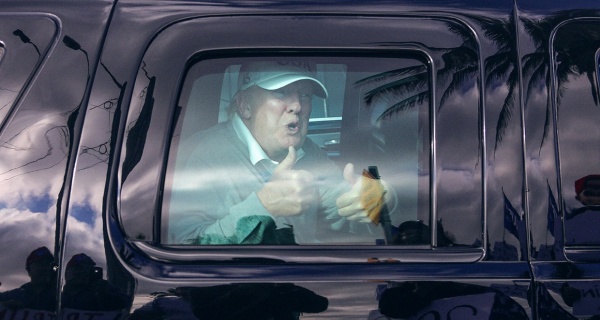 Most of the world seems to have concluded that the lunatic chaos described in Fire and Fury, the "bombshell" new book about the Trump White House by Michael Wolff, foretells the end of civilization.

The book certainly doesn't seem like good news. Wolff tells us our president is probably a neurotic illiterate, incapable of focus beyond a few seconds, and thought of as a deranged simpleton by even his most trusted advisors.

The excerpt in New York Magazine describes an idiot who didn't expect to win and spends his evenings locked in the White House bedroom wolfing down cheeseburgers – Trump reportedly has a Woody Allen-esque phobia about being poisoned and therefore loves the wholesome safety of premade McDonald's – while watching news about himself and descending into fugue states of rage and self-pity.

Pretty much any hack novelist writing an imagined account of what Trump's daily routine is like could have penned that exact same scene. (I might have put the cheeseburger in one hand and a hyper-smudged mobile device, for counter-tweeting purposes, in the other.)

The eerie literary accuracy of such accounts is probably why journalists spent much of Thursday debating the provenance of Wolff's information. Was it all true? Exaggerated? Stuff whispered in confidence?

Others questioned the validity of the account on the basis that the representation of Trump was so horrifically moronic, it couldn't possibly be real.

Donald Jr. objected to Wolff's claim that Trump, when pushed by Roger Ailes to name former House Speaker John Boehner Chief of Staff, replied, "Who's that?"

And it's true: Boehner and Trump went golfing together in 2013. Trump even said then, out loud, "I like John Boehner a lot." He also reportedly donated $100,000 to a Boehner-linked PAC. So, many say, it is impossible that Trump wouldn't remember who Boehner was.

Absurd! As anyone who covered Trump in the 2016 race knows, the man's brain is an ooze of fast-disintegrating neurons. Moreover, he has a long and storied history of forgetting stuff he only just said, and people he only just met.

The weirdest case came when Trump appeared to genuinely forget he'd spent much of the home stretch of the Republican primary campaign promising not to let the Indiana-based HVAC company Carrier move jobs to Mexico. He spent four months on the trail babbling promises about Carrier.

After the election, he balked at the idea he'd ever made such promises.

"I made it for everybody else. I didn't make it really for Carrier," he said.

This could easily have just been Trump cynically backtracking on a campaign promise, but it's hard to say. He often appears genuinely befuddled when challenged with earlier statements.

A much-decried incident in which Trump spoke about his wife Melania's feelings about Hurricane Irma as though she were not, in fact, standing right next to him, has usually been interpreted as Trump just being an insensitive goon treating his wife like a mannequin.

But the explanation of him genuinely forgetting she was two feet away also fits, if you watch the man enough. He is completely capable of just mistaking her for a thin person in a hat.

Trump often stares out at crowds like he has no idea where he is or how he got there, or like he's looking at a room full of scary aliens, à la Rowdy Roddy Piper in They Live.

So I completely buy the idea that Trump could not only have forgotten who John Boehner is, but forgotten golfing with him, and doing whatever else they did after – whipping each other with towels in the club room, etc.

This also could easily be a Far Out Space Nuts situation where Trump heard Ailes say "Boehner," when Trump thought the name was pronounced "Boner."

A detail I hope is true involves a purported insider description of Trump's scalp by Ivanka:

"[It is] an absolutely clean pate — a contained island after scalp-reduction ­surgery — surrounded by a furry circle of hair around the sides and front, from which all ends are drawn up to meet in the center and then swept back and secured by a stiffening spray. The color, she would point out to comical effect, was from a product called Just for Men — the longer it was left on, the darker it got. Impatience resulted in Trump's orange-blond hair color."

If the NSA is worth its budget, it ought to be able to produce a satellite photo of that "furry circle of hair," then use it to frighten spies into giving up their handlers. Humorously, in this telling, even Trump's hair color testifies to his debilitating lack of attention span.

The depiction of Trump as a mental incompetent who couldn't sit through even the beginning of a lesson on the Constitution ("I got as far as the Fourth Amendment... before his finger is pulling down on his lip and his eyes are rolling back," Wolff quotes Sam Nunberg as saying) rings painfully true.

So, too, does the description aides in the book use to describe the worst of Trump's moods, a thing called his "golf face." According to Wolff, he wore this expression the whole day of his inauguration, fuming over the absence of A-listers and other outrages: he was "angry and pissed off, shoulders hunched, arms swinging, brow furled, lips pursed."

Wolff basically describes Trump as a deficient buffoon who, when it comes to politics anyway, is totally out of his element, mistaking fake ardor for the real thing, constantly demanding fealty from Congress, the business world and staff:

"He was like an instinctive, pampered, and hugely successful actor. Everybody was either a lackey who did his bidding or a high-ranking film functionary trying to coax out his performance — without making him angry or petulant."

Wolff writes Team Trump was really hoping to "almost win" the presidency as part of a PR-driven business move, only to be horrified by the reality of securing a hugely demanding government job:

"Once he lost, Trump would be both insanely famous and a martyr to Crooked Hillary... Melania Trump, who had been assured by her husband that he wouldn't become president, could return to inconspicuously lunching. Losing would work out for everybody. Losing was winning.

"On Election Night, when the unexpected trend — Trump might actually win — seemed confirmed, Don Jr. told a friend that his father, or DJT, as he calls him, looked as if he had seen a ghost. Melania was in tears — and not of joy."

When Trump first announced his run, the consensus in the press corps was that the last thing he wanted was to actually be president. This was a man who spent his life golfing, pigging out and skeeving his way backstage in beauty contests. No one could imagine him volunteering for a life where he couldn't skip meetings with the Joint Chiefs, or the head of OPIC.

Now he is president, though, and, this being a new year, it's worth looking at the possible bright side of Wolff's account. Trump appears to be so far gone as to have no attention span at all, and to be totally consumed with press coverage of himself, almost to the exclusion of all else. This perhaps caps the irreversibly destructive consequences of his presidency.

That is not to say that horrible things haven't and won't continue to emanate from the Trump White House. (Just look at the recent heightened use of drone strikes, for example.)

But it's hard to imagine Trump focusing long enough to enact a plan as destructive as, say, the invasion of Iraq. Moreover, his confederates – especially now that Steve Bannon is out – seem mostly concerned with keeping the boss away from the real power of his office, almost like parents trying to steer a two-year-old away from the gas range.

America has been here before, piloted by mentally adrift presidents. Bob Woodward's Veil described how the CIA had to produce movies about foreign leaders because Ronald Reagan couldn't take in information (like who the heck Hosni Mubarak was) any other way:

"Since Reagan did not read many novels but watched movies, the CIA began to produce profiles of leaders that could be shown to the President... One was of the new Egyptian President. 'SECRET NOFORN' flashed on the screen as the narrator began, 'This is Hosni Mubarak...'"

George W. Bush was a similar figure. He spent much of his first presidential campaign lugging around a biography of Dean Acheson in a widely derided effort to convince the press corps he read books.

Bush in office openly admitted to not reading newspapers, relaying with surfer-dude insouciance that instead he got briefings from people who did. He was genuinely proud of knowing nothing.

We survived episodes like that, and a few others. (There is a story, perhaps apocryphal, that James Buchanan bought a ten-gallon jug of whiskey every week.)

Trump by most accounts is worst of all, and the horror effect is enhanced by the seemingly total absence of redeeming qualities in his personality. But a guy who fell backwards into the presidency and has been too brain-hampered upon arrival to do much with the office – there are worse narratives.

Just remember, Trump could be cunning, focused and bursting with willpower, in addition to being a gross, ignorant pig. We can only hope that Wolff is right that he isn't both.