Baltimore: Residents Say Low Police Presence Is The Cause Of High Murder Rate 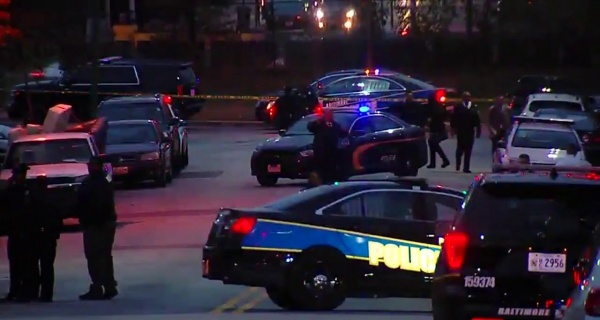 For the third year in a row, Baltimore, Md., has had more than 300 murders, reaching a new record of murders per number of residents in 2017.

Some residents attribute the high murder rate to relaxed police patrols in the city following high-profile cases of police brutality. Officers have backed off in neighborhoods, like the one where Freddie Gray was arrested.

The Rev. Kinji Scott, a pastor in Baltimore who's held positions in local city government, says the opposite needs to happen.

He's among activists who are calling for police reform to reduce the violence in Baltimore and several other high-crime cities across the U.S. that he says haven't seen change. That change begins with a conversation between the communities directly involved, Scott says.

"We need the front line police officers and we need the heart of the black community to step to the forefront of this discussion," he says. "And that's when we're going to see a decrease in crime."

On the current state of community safety in Baltimore

When you think about young people who are out here facing these economic challenges and are homeless and living places that are uncertain, and you're a parent — you're scared. Not just for yourself really, but for your children.

The average age of a homicidal victim in Baltimore City right now is 31 years old. We had a young man who attended one of the prime high schools, [Baltimore Polytechnic Institute], Jonathan Tobash, and he was 19 years old, he was a Morgan State student. And he was killed on his way to the store. That's the state of Baltimore right now.

No. That represented our progressives, our activists, our liberal journalists, our politicians, but it did not represent the overall community. Because we know for a fact that around the time Freddie Gray was killed, we start to see homicides increase. We had five homicides in that neighborhood while we were protesting.

What I wanted to see happen was that people would be able to trust the relationship with our police department so that they would feel more comfortable. We'd have conversations with the police about crime in their neighborhood because they would feel safer. So we wanted the police there. We wanted them engaged in the community. We didn't want them beating the hell out of us, we didn't want that.

On whether the high murder rate is unique to Baltimore

It's not. I lost my brother in St. Louis in 2004; just lost my cousin in Chicago. No, it's not unique, and that's the horrible thing.

On whether Ferguson, the killing of Michael Brown, and the birth of the Black Lives Matter movement has brought change

The primary thrust nationwide is what President Obama wanted to do: focus on building relationships with police departments and major cities where there had been a history of conflict. That hasn't happened. We don't see that. I don't know a city — Baltimore for certain — we've not seen any changes in those relationships. What we have seen is that the police has distanced themselves, and the community has distanced themselves even further. So the divide has really intensified, it hasn't decreased.

And of course we want to delineate the whole culture of bad policing that exists — nobody denies that — but as a result of this, we don't see the level of policing we need in our community to keep the crime down in our cities that we are seeing bleed to death.

On whether he's optimistic for 2018

I am not. Because I look at the conclusion of 2017, these same cities — St. Louis, Baltimore, New Orleans and Chicago — these same black cities are still bleeding to death and we're still burying young men in these cities.

I'm a preacher, I want to be hopeful, but not as it stands, no. Not until we really have a real conversation with our front line officers in the heart of our black communities that does not involve our people who are "leaders."

We need the front line police officers and we need the heart of the black community to step to the forefront of this discussion. And that's when we're going to see a decrease in crime.