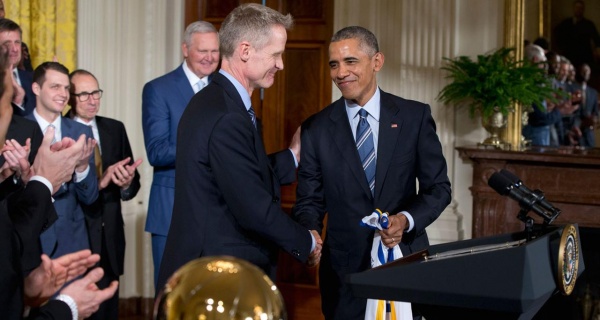 He discussed the social media movement that has him running for vice president and Spurs coach Gregg Popovich running for president in 2020, but also said he cannot envision a foray into politics.

The 52-year-old former player has been loud in his opposition to President Trump, one reason the team won’t make a customary visit to the White House to be recognized for its 2017 NBA championship. The logical time would be late February, when they play the Washington Wizards. After criticism from Kerr and players, Trump in late September preemptively uninvited them.

Kerr – who spent part of his childhood growing up in Lebanon and whose world view was forever changed by the 1984 assassination of his 52-year-old father, Malcolm, while he served as the president of the American University in Beirut – says he will continue to speak up in press conferences about everything from the President to gun violence.

Q: As troubled as you seem to be, is there some gratification for you in trying to share certain messages and sensibilities?

A: Yeah, and a lot of pride in our players' willingness to speak out. I don't know if you saw the Sally Yates column (written by the former acting attorney general in USA TODAY on Dec. 19). I read it this morning, and I tweeted it. It’s fantastic. But there's absolutely an assault on our institutions and on our core values as a country. She tweeted the preamble to the Constitution, which really sums up our country. And all those things are kind of under attack right now.

One of the things she writes is how important it is to speak the truth, and for people to not be deceived, coerced. That's the entire reasoning behind the structure of our government, you know? Checks and balances. But it goes beyond the checks and balances. It's up to the citizens to, ‘We The People,’ right? It's not ‘We the President and Congress.’ It's ’We The People, in order to form a more perfect union ...’ So, who's The People? You and I are the People. … We all are. Steph (Curry) and Draymond (Green) and KD (Kevin Durant). So it's important for all of us to call b-------, and there's a lot of b------- right now, and propaganda, and misinformation. You can't let that happen. The truth has to always win out, and our institutions and ideals have to win out, so it's important that we speak out.”

Q: So with that in mind, what lies ahead for you in terms of how you use your voice. The Pop/Kerr thing, to me …

Q: Right, so that’s your normal reaction. But to your point about “We the People,” – I mean, we have a reality television star as President, so there are no rules to this game.

A: Well, that’s been established. (laughs)

Q: Project a little bit. Could you see yourself going down that political road?

A: No, I can't imagine getting into politics. It sounds horrible. It sounds awful. What would you rather do, coach basketball or be in the government? ... I'm not interested or qualified for something like that. But again, I think if you have a voice, you've got to use it. It just drives me nuts, though, the sort of selective morality that exists, you know? I think what's happening is that because of the nature of the life that we all live, with modern media, social media. You're seeing it manifest itself in so many ways, whether it's men being exposed for sexual harassment or corruption at many levels that's being exposed. … Like this Jerry Richardson guy (the Carolina Panthers owner who put the team up for sale after accusations of workplace misconduct).

Before, these things were all swept under the rug. And now, everything is sort of out in the open. But what comes with that, with everything being out in the open, is enormous amounts of misinformation and lies and propaganda, and so people trying to coerce others. It's just a reminder that this is the tendency of mankind. The history of the world is that people are going to look out for themselves, and people are going to be power hungry. That's one of the reasons our country has been so successful is we have these institutions in place to protect us from ourselves, and so the institutions have to win out. The only way that's going to happen is if we keep calling b-------, so that's my approach. I just have to join the coalition that's calling b-------.

Q: You mention the Richardson situation, and you talk about journalism at work. The Sports Illustrated story drops, and then he’s selling the team.

A: Bam. That’s the importance of the free press. That’s another one of the tenets of what Sally Yates was talking about, was that the free press is what allows us to call out the b-------. There’s an assault on the free press right now. You see the list of words that they didn’t want the CDC (Centers for Disease Control and Prevention) to use? I mean, what is that? It’s unreal.

The only way that (kind of state control) happens is if people are coerced, and people believe in the divisiveness that's happening, I don't know if we should give Trump credit, or if it's his nature to divide. But there has to be this divisiveness in order for this idea to take hold, where you can accomplish all these things. There's a big section of the population that truly believes he's the patriotic one, he's trying to uphold America's ideals because the ideals have been blurred, right? And I think it's not all Trump, right? It's the last 20 years of 9/11 and terrorism. So you've got policy stuff like immigration that comes into play, and a lot of sort of patriotism, or misguided patriotism, that factors into all this stuff. So it's tricky. But the only way any of this stuff works is if the people are behind it, and a lot of people are behind Trump, which is kind of scary.

That's the other thing, is talking about the social media aspect of it, is the anger that exists now based on people's ability to just tweet their thoughts and expose their thoughts and publicize them. It creates this weird back and forth, and more divisiveness. … People write stuff about each other that there's no way they would say to each other's face, and we're all human so we're going to have some bad thoughts, right? But there's a civility that has to exist. And then of course, as soon as you bring that up, the Trump people go, 'Oh, you're politically correct. I want the truth. Stop being so politically correct. Just say what you feel.' Like, 'Well, you know what? That's probably not always good.'

Q: Do you guys know what you’re doing when you go back East (in lieu of the White House visit)?

A: Yeah, we have a plan. … We're just doing a nice thing. We're not doing anything political. We're having a really good, productive day helping some people and doing something nice. We're not going to make a big deal out of it.