Why Should The Elderly Be Frightened By The Republican Tax Plan? 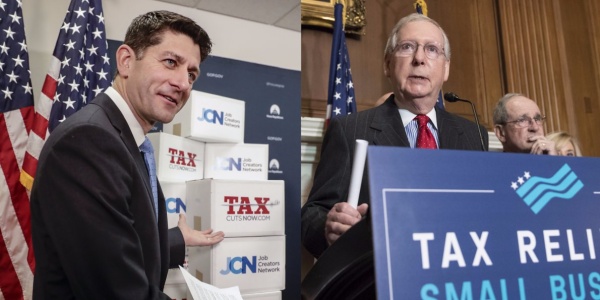 With the GOP tax plan set to become law by early 2018, everyone needs to take a look at how their lives and finances will be affected. For example, we know the majority wage earners making below $70,000 won’t benefit much from this law.

In fact, because the tax cuts add $1.4 trillion to the deficit, the average American should probably expect to see less in Social Security and Medicare than previous generations. For millennials and folks in Generation X, those worries might go on hold for a few years.

However, older Americans who don’t yet qualify for Medicare but need health care — generally, those between 50 and 64 — could be big losers in the short term. Meanwhile, seniors in certain states could see tax deductions disappear and Medicare funds cut short. Here’s why many older Americans should be terrified of the new GOP tax law.

1) Some 13 million people off health insurance

With repeal of Obamacare individual mandate, the healthy will exit and premiums will rise.

Though there were no public hearings and most members of Congress couldn’t speak about the law in basic terms, some things breezed past the D.C. media covering tax reform. The big one was repealing Obamacare’s individual mandate. Without this provision forcing people to buy insurance, many young and healthy folks will stop buying it. All told, the Congressional Budget Office said 13 million would leave the insurance pool in the coming years. When the healthy exit, the sick pay more.

The first big increase comes in 2019.

As healthy people exit the insurance pools, the older Americans who remain will pay much more. According to an AARP analysis, the number of uninsured aged 50 to 64 dropped by 40% since 2013, when Obamacare hit its stride. However, everyone in this age group with Obamacare will see premiums rise an average of $1,500 by 2019. The older you are, the more you will pay. Residents of Wyoming ($2,562) and Nebraska ($2,242) will see the biggest increases.

It’s not a tax cut for everyone.

When Trump spoke of giving Americans a “giant tax cut for Christmas,” he didn’t mean everyone. In fact, AARP estimates that 5 million seniors won’t get tax cuts in 2019. By now, people don’t expect the truth to come out of Trump’s mouth, but when you’re giving away billions to corporations, he probably should have used more tact. At the end of the scheduled cuts, even more, seniors (5.6 million) would see no drop in taxes.

4) Some will see taxes rise.

A tax hike is in store for many older Americans.

Even with a massive $1.4 trillion tacked onto the deficit, authors of the GOP bill still needed revenue to make their tax cuts work. So they shifted the burden to folks living in higher tax states like California, New Jersey, and New York. The new law caps state and local tax (SALT) deductions at $10,000 per person. Those who pay more in property or personal taxes won’t be able to deduct them, thus raising their federal tax payment.

The GOP House and Senate conferences really wanted to take away medical expense deductions, but they only got part. Currently, 8.8 million Americans take advantage of the deductions, which kick in when your medical bills top 10% of your income. Congress dropped the deduction threshold to 7.5% for 2017 and 2018. But in 2019, it will return to 10%. Nearly 70% of those who claimed this deduction in 2015 earned less than $75,000.

Without further legislation, the Republican tax plan triggers cuts to Medicare in 2018.

AARP opposed the GOP tax plan for a variety of reasons, and coming cuts to Medicare were a big one. Despite Trump’s campaign promise to not cut senior health care, the tax law he pledged to sign will trigger $25 billion cuts to Medicare in 2018. These cuts come automatically from the “pay as you go” law (PAYGO). This law exists to keep the deficit in check. When a new law adds to the deficit, PAYGO prompts mandatory cuts to programs like Medicare.

You’ve heard about alternative facts, but are you ready for alternative inflation? Paul Ryan and others in the GOP conference have pushed for a new system for measuring inflation for years, and they finally got it in this tax law. (President Obama supported the idea, briefly, before getting pushback from Democrats in Congress.) Social Security benefits and other key spending items will now use “chained CPI” to measure the cost of living.

What does all that mean? People can get deep in the weeds trying to understand it, but a helpful article in Bloomberg simplified it. Calling it “a stealthily growing tax hike,” the author cited a 2013 analysis on which tax brackets would be affected most. You guessed it: Folks earning between $25,000 and $50,000 would feel the biggest burn.

There’s only a few programs with money to pay for $1.4 trillion.

We know Trump is about to break his promise on Medicare, but many fear Social Security would be next. The reason is simple: When you need to pay for $1.4 trillion in tax breaks, you have to go where the money is. Unlike Medicare, Social Security is protected from automatic cuts.

However, during the tax debate in December, GOP Senators Pat Toomey and Marco Rubio could not promise they would leave Social Security alone for future generations. After Bernie Sanders (I-Vermont) pressed them on the issue, he translated for anyone listening. “[Toomey] just told you he’s going to cut Social Security,” Sanders said. When deficits run high — in this case, because of tax breaks — deficit hawks look to “entitlement” cuts for savings.