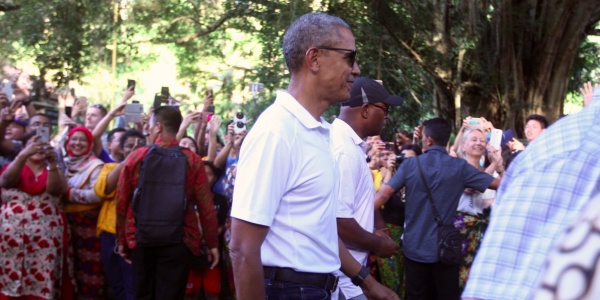 Since walking out of the White House on January 20 and handing the keys over to Donald Trump, we haven't heard a lot from former President Barack Obama. But don't take that to mean he's just been sitting around his home in Washington, D.C.

For instance, he and Michelle have earned some $60 million for their memoirs. Besides that, let's take a look at what the 44th president has been up to since leaving office:

Jet-setting Around the Globe

Obama has traveled the world since departing the White House, vacationing in no fewer than three continents and hitting at least nine different countries. The Obama tour of the world began immediately on Necker Island, an exclusive island close to the British Virgin Islands that is owned by British entrepreneur Richard Branson. It was on this trip that photos of Obama kitesurfing found their way onto the internet and were quickly turned into popular internet memes.

Other stops on the Obama world tour included a luxury resort in French Polynesia as well as the highlights of Italy’s Milan and Tuscany. The 44th president also went to London to meet up with good friend Prince Harry. Most recently, there was a family excursion to Indonesia, where the ex-president spent time in Bali, Central Java and Yogyakarta.

Speeches Across the World

Obama made his return to the public sphere in April at an event in his adopted hometown of Chicago, where he addressed a group of young leaders at the University of Chicago. He urged them to follow in his footsteps, seek to make changes in their communities and "help in any way prepare the next generation of leadership to take up the baton and to take their own crack at changing the world."

Perhaps the most personal speech the president has given since leaving office came in late September when he surprised the crowd at a fundraiser for the Beau Biden foundation. The organization, named after Vice President Joe Biden's late son, who died in 2015 after battling cancer, has a stated goal of "ensuring that all children are free from the threat of abuse."

Obama has come under some fire for making a series of paid speeches since leaving office, giving nine in 2017. Vermont Senator Bernie Sanders, who ran for the Democratic nomination for president in 2016, called it "distasteful" that Obama made paid speeches to Wall Street companies.

Not Out of Politics and Public Service

The first major announcement Obama made after leaving office came in early May, when he unveiled preliminary plans for the Obama Presidential Center in Chicago, which will consist of three buildings in Jackson Park. The plans called for a museum; a forum building with a restaurant, auditorium and public garden; and a library. The library will not actually hold Obama's physical records, as he plans to make his presidential library the first to digitize all records.

Since his exit from the spotlight, Obama has been unable to fully detach himself from the political fray. He has been involved with the National Democratic Redistricting Committee, focusing on winning back state legislatures across the country in order to control redistricting processes that will take place across the country following the 2020 elections. Obama's official entrance into that effort came in early July when he hosted a private fundraiser for the organization in Washington, D.C.

Lastly, Obama found his way back to the campaign trail in late October when he made a stop in Virginia to stump for Ralph Northam, who went on to win November's gubernatorial election.