Watch: The Five Things We Learned From The Obama-Prince Harry Interview 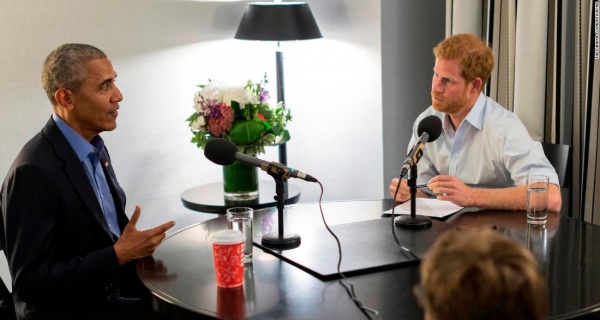 Date Posted: Wednesday, December 27th, 2017
Listening to the interview of President Barrack Obama by Britain’s Prince Harry is like eavesdropping on two old friends catching up. There was discussion of recent events, their thoughts on societal manners, debates about inconsequential pop culture matters, and some goodnatured teasing.
The podcast of the talk, released Wednesday, is full of interesting back and forth. While the two certainly had plenty to say to each other in their 40-minute conversation, there were a few standout moments.
How Obama kept his head in his sudden rise to fame
Obama went from an unknown to president in a staggeringly short amount of time. The way he and his wife Michelle survived that, he says, was solely because they’d had a chance to live a normal life for many years prior.
“It was some strange good fortune on our part that we didn’t become famous or in the public eye until we were in our 40s,” he said. “By the time I was elected to the U.S. Senate and I was a national figure, I was a grown man. I was settled. I was a parent. I had changed diapers—or nappies, as you call them apparently. I had struggled to figure out how we were going to pay the bills. I had made sacrifices. Michelle and I had had the arguments that married couples have.”
Life beyond the Oval Office
The transition from leader of the free world to civilian is a jarring one for anyone. Obama noted that he’s having trouble getting used to people’s definition of immediately (which can sometimes be days or weeks). Even nine months after leaving the White House (the interview with Prince Harry was recorded in September), Obama said he’s struggling a bit.
“It gives you the opportunity to reflect and study in a way that as president you couldn’t always do … because you had to move very, very quickly,” said Obama. “One of the interesting things about leaving the presidency was realizing my life had been so accelerated that my life [today], in some ways, feels like it’s moving in slow motion. …
Where I’m from, ‘right away’ means if we don’t do something in half an hour, somebody dies. There’s just a lower intensity level. Sometimes that means you don’t get the same adrenaline rush, but it also means you can be more reflective and deliberate about the things you want to get done.”
The risks of social media
Obama was the first president to use Twitter, but his successor has made it a primary communication tool. While neither Obama nor Harry mentioned Donald Trump by name, they did discuss the dangers of the online world and social media, particularly how it can lead to people only reinforcing their opinions, rather than looking at an issue from all sides.
“A good way of fighting against that is making sure that online communities don’t just stay online, that they move offline,” said Obama. “I think social media is a really powerful tool for people of common interests to convene, and get to know each other and connect, but then it’s important for them to get offline, meet at the pub, meet at a place of worship, meet in a neighborhood. The truth is, on the internet, everything is simplified. When you meet people face to face, it turns out they’re complicated.”
Obama’s pop culture preferences
Harry hit Obama with a series of either/or lightning questions that gave some visibility to the former president’s likes and dislikes. For instance, he has never seen White House Down or Olympus Has Fallen. He misses the White House cinema more than the bowling alley. He has no opinion whatsoever about a favorite Kardashian. And when asked to choose between Friends‘ characters Rachel or Monica, he opted for Jennifer Aniston’s Rachel.
How Obama would spend his last $5
The Obamas aren’t likely to be broke anytime soon. But Harry did ask if the former president was down to his last $5, would he spend it on a lottery ticket or a burger?
“It depends on how good the burger is,” said Obama. “But I like a good burger!”