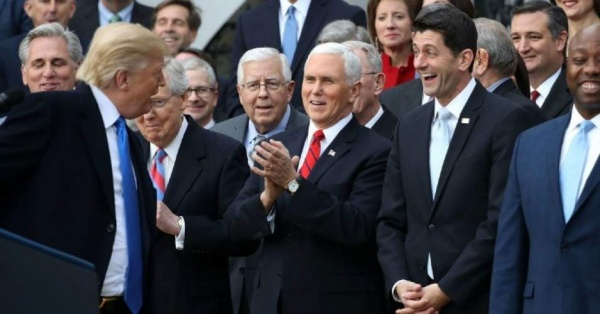 Today is a good day to be a Democrat. Today is a shameful day to be a Republican. There is not a day that goes by that I am not embarrassed about my past affiliation with the GOP. Not only was I a member of the GOP, but helped GOP candidates raise money and win elections. If I’ve typed it once, I’ve typed the words 100 times, “they weren’t always like this.”

They are “like this” now, and it is an embarrassment to them, and to the nation. I’m pretty sure the USA is now part of the “Axis of Evil” along with Russia and North Korea. That is not just my view. The Germans now see Trump as a worse threat to Germany than Putin.

Think about that for a minute. A key ally of the USA for 70 years now views us as their threat. I realize those supporters of Trump who have no appreciation for international business, or any appreciation at all for how the USA economy works won’t view this with alarm.

They should view it with alarm. Germany is one of the key nations that finance our irresponsible deficit that was created by the GOP and is being made even worse under the GOP tax bill. German investment in the USA is critical for working class people.

From building cars in the very states that support the GOP, to the pharmaceutical and electronics industries, German investment is important to keep the economy of the USA running. Now the Germans don't trust us. Don’t take my word for it. There here is an article published on the topic by Reuters. Oh yes, I keep forgetting, if it isn’t on Fox or Breitbart it is “fake news.” That is the kind of rank stupid that has allowed extremists to take over a party.
There are a lot of people rolling over in their graves when they look at today's GOP.

There have been many great Republicans in our history.

Abraham Lincoln, who was willing to go to war to end slavery and establish the rights of the Union. Just imagine a Republican trying to do that today.

Theodore Roosevelt, who established our National Park system. The very system the GOP wants to destroy with mining and exploration.

Dwight Eisenhower, the man who led our forces in World War II that destroyed the greatest evil the world had known up until that time in history.

Richard Nixon, I’m sure the majority of my Democratic readers just threw up. Think about it a moment. Richard Nixon opened up the world to China. He established the same EPA that Trump and his gang want to shut down because killer smog was a reality in this nation.

Ronald Reagan, whose internationalism and free trade principles allowed companies like Seimens, BMW, and Mercedes-Benz among scores of others like Toyota, and Mitsubishi to open plants and operate them profitably in the USA.

As Democrats, we focus on the shortcomings of all the men listed above. We tend to not look at their achievements. Yes, they did things badly too, and they were wrong on many, many fronts.

The GOP has lost all moral bearing.

Can you envision Ronald Reagan or Dwight Eisenhower bragging about sexually assaulting a woman because they are famous? I knew Ronald Reagan. I was party to a lot of casual conversations with the President when Nancy was not around. He had been no saint in Hollywood, but he didn’t brag about his past.

The GOP turns a blind eye to the President of the United States as 16 women came forward with their stories about his sexual misconduct. Never-mind all that, give me my white nationalism and trade protectionism. The GOP way is to Hell with the women.

The stories come out, and the GOP is hiding behind due process. Nancy Pelosi tried to hide behind due process with John Conyers. Democrats would have no part of it, so Congressman Conyers had to announce he is retiring and stepping down from office. Senator Franken is resigning on January 2. Democrats are not going to tolerate what the GOP embraces. We aren’t going to stand behind someone who abuses women sexually because of ideology.

A few weeks ago those good Christians in Alabama went to the polls to vote for someone to take the open Senate seat in a special election. They nearly elected Roy Moore, a pedophile over a man who prosecuted the Ku Klux Klan for killing a young girl? A man who thinks our Government is God? A man with a history of being a predator and who was thrown off the bench twice due to his incompetence?

It’s degrading to be a Republican. I’m glad I’m gone and ashamed of my affiliation with the party at high levels for over four decades.