Five-Year-Old Shot For The Second Time In Two Years 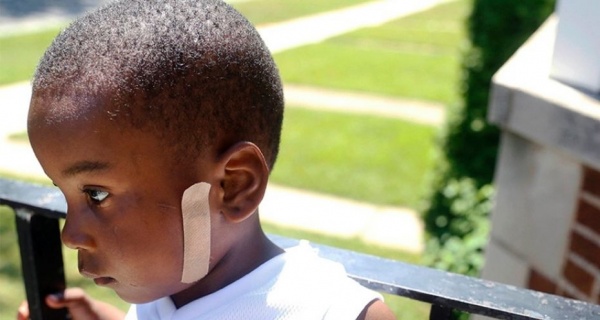 An hour before surgery on his hand Wednesday afternoon, 5-year-old Kavan Collins climbed on tables and slid around in cotton socks on the hospital room’s tile floor.

Aside from the wrappings on his right hand, which protect the wound where he accidentally shot himself Tuesday evening, the boy looked healthy. He played with a remote control car alongside his 3-year-old brother and shook his head “no” when asked if his hand still hurt.

After a skin graft, Kavan’s family expects to have him home for Christmas — good news for a family that knows firsthand the shooting could’ve been worse.

In June 2016, Kavan was walking with his mother when a stray bullet broke his jaw, an incident his family said changed the boy’s personality and made him believe he needed a gun for protection.

“Ever since his first tragedy, he (hasn't) been the same,” said Kavan’s mother, Dantignay Brashear. “He's growing up to think that's what he needs for protection. And he'll say that out of his own mouth.”

Brashear, who was not present when Kavan accidentally shot himself, said the boy was at his father’s family home Tuesday with five children and other relatives.

The boy told his family he was hiding a toy from his brother under a mattress in one of the home’s bedrooms when he discovered the weapon and pulled the trigger.

The shooting happened about 6:20 p.m. in the 8100 block of South Coles Avenue in the South Chicago neighborhood, police said, after the boy found the gun under his father’s mattress.

The father, Kevin Collins, 25, was charged with being an armed habitual criminal, unlawful use of a weapon, and possession of a firearm with a defaced serial number, all felonies, police said. He also was charged with misdemeanor child endangerment.

Records show Collins was convicted of retail theft in 2015 and theft in 2010. He is scheduled to appear in court Thursday.

After the accidental shooting, Kavan was taken in good condition to Comer Children’s Hospital, the same hospital where he was taken last year after he was shot the first time.

That incident happened June 28, 2016, in the 6400 block of South King Drive in the Parkway Gardens neighborhood. Police said Kavan and his family heard fireworks, followed by gunshots.

One of the bullets hit the boy. Another crashed through a window and a wall and struck a 28-year-old woman in the head. She was taken in good condition to Stroger Hospital.

Police said the shooters were in a dark-color four-door vehicle and they were firing at a group of people gathered in a building courtyard. Neither the boy nor the woman was the intended target, police said.

The Tribune interviewed Brashear in 2016. At that time, she said Kavan’s grandfather had just dropped the boy off when the shooting happened.

“He was crying while we were running, but I wasn’t paying attention to him crying because it wasn’t like a cry like something wrong with him,” Brasher said. “I’m thinking he’s just scared of the firecrackers.”

Then she noticed blood covering his face and assumed he’d been hit with fireworks.

“I wasn’t thinking it was gunshots until they brought him into the light to see that he got shot in his face,” Brashear said.

Brashear said she had a lot of guilt over the shooting and didn’t know how to communicate with a child so young about something so traumatic.

“I don't really know too much about how he feels because he’s still young. Like I have to wait until he gets older to ask him about it,” Brashear said in 2016. “But I don't even ask him too much about it … because I don't think he really understands right now.”

Weeks after the shooting, Brashear said she could tell it had taken a toll. She noticed changes in Kavan, and he seemed as though he was always prepared for a fight.

“Now he thinks he needs a gun for protection,” Brashear said at the time.

Brashear said she didn’t sleep and cried sometimes, grappling with guilt, in the nights after Kavan was shot.

“I didn’t want him to grow up thinking I let him get hurt,” she said.

Fortunately, the bullet “went in and out,” Brashear said. Kavan had surgery to repair his broken jaw and has recovered from the physical wounds of the 2016 shooting.

Since then, Kavan has lived mostly with his father's family in the South Chicago neighborhood where he accidentally shot himself Tuesday.

In a soft voice at the hospital before his surgery Wednesday, Kavan offered a simple explanation for what happened.

“I picked up the wrong thing and shot myself in the hand,” he said.