The Republican Party Has Embraced The Ayn Rand Philosophy 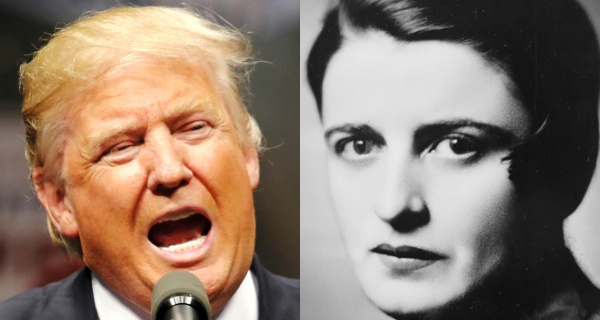 Historians may determine that it was the date America’s second civil war began. By that perspective, just as the first Civil War was the last gasp of slavery, this second is very likely the last gasp of aging white Americans — their full-throated death rattle against an America that they detest for having changed so dramatically the traditions and power structures by which those whites had lived. Regressions are often like that. They are an angry attempt to prevent a threatening future from arriving. Republicans had long preyed upon these discontents but did so tepidly — a wink-and-nod approach. Trump voiced them and validated them, making racism, nativism, and sexism acceptable. It will be his primary legacy.

But I think the real lesson of 2016 lies not in politics, but in religion. We hear a great deal about tribalism as an explanation for the Trump phenomenon. We hear about how Americans have divided themselves into parochial groups that reinforce shared values and interests as well as grievances and hatreds. But if tribalism answers one question — why people seem to hold so firmly to their beliefs in the face of contradictory evidence and even moral opprobrium — it doesn’t answer another, more important question: Why did they join these tribes in the first place?

I believe religion rather than politics may provide that answer. One of the most important shifts in our culture has been the transformation of politics into a kind of civic religion. Religion has always provided a sense of identity — hence the tribalism — but it provided something else, too; something even more fundamental. In what historian Karen Armstrong describes as the Axial Age, from which modern religions grew, it pointed the way to a meaningful life with spiritual values. That was for nurturing the soul. And it provided a cosmology, a systematic way of thinking about and explaining the world and our place in it. That was for the mind.

I have written previously about how conservatism turned itself into a civic religion, which I think is one of the affinities between evangelicalism and conservatism — not just that they share some values, but that they share the very idea of orthodoxy. Armstrong describes in a religious context how the Axial Age lost its spiritualism to dogma. This is especially relevant in a complex, ever-churning world that seems to outrun our capacity to understand it. True religion, I believe, begins in doubt and continues in spiritual exploration. Debased religion begins in fear and terminates in certainty.

Modern conservatism, like debased religion, has an explanation for everything, and there is nothing mysterious or spiritual about it. Trump understood the desire for some all-encompassing answer, as demagogues always do. Demagogues assume the proportions of religious leaders, but without the moral instruction. Through a process of simplification, they purport to tell their followers what happened and who is responsible. In short, they provide cosmology, not for the purpose of enlightenment, but for the opposite — benightedness.

As religious observance has declined in America, as faith has declined and the religious cosmologies have weakened, political passions and political cosmologies have risen, and those old religious/conservative affinities have strengthened as religion tries to save itself by piggybacking on politics, rather than as some belief, the other way around. Roy Moore, the Republican senatorial candidate in Alabama, is the perfect example of religion’s surrender to politics. Many evangelicals embrace him despite credible allegations of child molestation, showing how morality has become so politicized that it no longer even makes sense. That is because politics is the new religion of America.

Other observers, many of them brilliant, have been less alarmist than I about the permanent effects of Trumpism. New York Times columnist David Leonhardt wrote this past week that the Republican tax bill, which is like a nuclear bomb to the economy and to economic equality, will likely not have as severe consequences as many critics, myself included, fear. He says that politics change, Democrats sooner or later will take power, and they will revise the law just as Obama revised Bush’s tax cuts. Nothing is irrevocable.

But this assumes that politics is still politics, not religion. Religions are not easily reformed, doctrines are not easily changed, disciples are not easily converted. History is punctuated with religious warfare. This new civic religion has already put Republicans in the position of turning every election, every legislative squabble, into Armageddon. Ten years from now they may still be trying to repeal Obamacare. In the long run, perhaps, Leonhardt is right. Things change. They always change. But then again, according to the old saying, in the long run, we are all dead.

And that is why I don’t think the Trump moment will pass without serious and permanent damage to America. Trump isn’t just a politician with whom one may disagree. Indeed, Trump really has very little interest in politics, none in policy, and no respect whatsoever for the political process, which he ridicules at every turn as “rigged.” Instead, Trump, like other creators of a cult of personality, is a self-proclaimed savior, who promises his supporters redemption. In a certain sense, he is right. Trump’s is a cosmology of an America — a world, gone wrong — an America decayed by changing values purveyed by nonwhites, non-Christians, and nonmales. He tells his supporters he will make it right. They believe him. And they will not be dissuaded. In Trump they trust.

So what to do? When liberal commentators discuss how Obama voters drifted to Trump and must be courted if Democrats are to win, I am deeply skeptical. I am skeptical of the data, which draws questionable conclusions about voting behavior, and I am even more skeptical of the effort to attract them. Thomas Edsall is as wise a columnist as we have, and he has been indispensable in trying to decipher this crisis in national sanity. But I think he too underestimates the forces that feed Trump and that Trump feeds. Last week’s column enjoined liberals to take their fingers out of their ears so they could hear the complaints of those Trump voters and win them back, even as he admits to the near impossibility of a liberal democracy, committed to freedom of expression, containing its more extreme elements.

I am not at all opposed to listening to Trump supporters. Quite the opposite. It is an imperative that they be heard and understood. I just don’t think there is much common cause between progressives and them. They are not all racists, nativists, sexists, homophobes, and Islamophobes, but a healthy percentage are, and I think it’s probably a fool’s mission to attempt to change their minds. Just watch the people at Trump’s rallies. That is what makes the future so perilous. They are not going to convert.

Moreover, I am convinced that the worst is yet to come. Heading into the special election in Alabama, Moore seemed likely to win, confirming the utter depravity of the Republican Party. Thankfully — mercifully — that was not the case. Trump will issue blanket pardons in the Russia investigation and eventually fire Robert Mueller. The attacks on environmental protection, conservation, economic equality, the social safety net, a free press, voting rights, higher education and reason, diplomacy, women and morality itself will continue unabated with the full support of the Republicans. We shouldn’t fool ourselves. America is under siege, and this civil war has already taken a grave toll.

So I am not hopeful, but I don’t want to leave this space with a sense of hopelessness or futility. The resistance movement has already borne fruit, and there is a chance, albeit small, that Democrats will retake Congress next year and the counterattack will begin. I always remind myself, as you should remind yourself, that while the forces of hate are powerful, unshakable and mobilized, there are more of us than of them — Hillary Clinton did win the popular vote, after all.

But just as I don’t think politics is the real engine for the Trump movement, I don’t think that politics is entirely the solution. Religion, which in its corrupted form is an engine, may be — by which I mean the moral and spiritual underpinnings of life. Rather than abandon our values or downplay them, as some suggest, I think we should double down on them. The religious historian Karen Armstrong, in describing those early religious principles of the Axial Age, wrote, “First, you must commit yourself to the ethical life,” and concluded that “religion was compassion.”

These are important things to remember. Let the conservatives continue to eschew ethics and compassion. Let them sow hatred. Let progressives hold firmly to ethics and compassion and to love. Morality, not moralism, is an almost ineluctable force. We talk a lot about grass-roots politics. We need to talk as well about grass-roots morality. Put simply: If you want to defeat Trump where it really counts, live ethically. The rest will follow. As Martin Luther King memorably said, paraphrasing Theodore Parker, “The arc of the moral universe is long, but it bends toward justice.”

Moreover, when it comes to cosmology, progressives need to provide an alternative narrative to Trump’s and the conservatives’ that will explain the world without distorting it. It should tell the story of economic inequality, and of plutocracy, and of the role of conservatives in enabling these things. It should also provide a positive vision of community and mutual assistance and global interdependence. It should promote compassion and empathy. It should be simple, powerful and affirmative, and it should be repeated endlessly the way Trump repeats his racist/nativist/sexist/phobic narrative. I am convinced that you don’t fight fire with fire, which is why I am dubious of Democratic efforts to out tough Trump. You fight fire with water.

Here is hope. Even if 40 percent of Americans have gone to the dark side, there are still so many people who are good and decent and self-sacrificing and who will continue to fight for a just society. It has been my privilege to share my ideas with them (and you among them) these past two years. I hope I will be able to engage them (and you) again. Yes, it is a sad, indescribably tragic time in America, and now that we know what we know about so many of our fellow citizens, about the Republican Party, and about the incapacity of our political system to deal with extremism, there is no going back. But in spite of all that, I think we must keep the faith, and we must take comfort that we have one another, not as fellow tribalists, but as fellow human beings searching for our best selves.