How Doug Jones Pulled Off An Upset In Deep Red Alabama 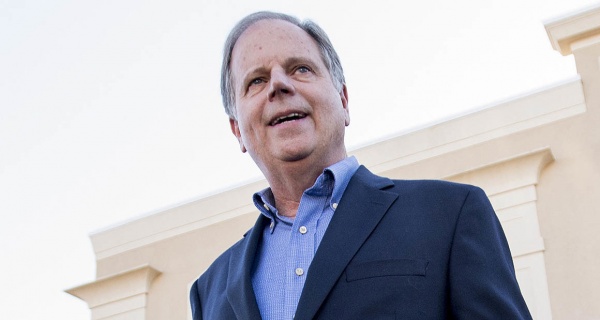 The Republican Party sold itself cheaply for the sake of an Alabama Senate seat—and it didn’t even get the win. On Monday night, Doug Jones, the Democrat, declared victory over Roy Moore, who is facing multiple allegations of predatory behavior toward teenagers, by a margin of one and a half percent. It was close, but, as President Trump, who had endorsed Moore and encouraged the Republican National Committee to rush funds to the campaign in the final stretch—which, to its shame, it did—said in a tweet, “a win is a win.” (Moore also had the full support of the Alabama Republican Party.) In particular, black Alabamians appear to have turned out in force for Jones. His campaign had appealed for their support as a community. Charles Barkley, the retired basketball player and native Alabamian, campaigned for Jones, and President Barack Obama recorded a robocall. (Trump did one for Moore, in addition to tweeting for him.) Turnout was markedly higher in counties with large black populations. These voters were the ones who defended the state’s respectability. Jones said, in his victory speech, that “this entire race has been about dignity and respect . . . This campaign has been about the rule of law. This campaign has been about common courtesy and decency and making sure everyone in this state, regardless of which Zip Code you live in, is going to get a fair shake in life.” But he wasn’t only talking about teenage girls. Moore had made his bigotry explicit, and the Republican Party had tolerated it. Jones placed the full Moore in front of voters, and he won.

There had been a certain amount of amazement that any Democrat, even Jones, a respected former U.S. Attorney who had successfully prosecuted some of the murderers in the Sixteenth Street Baptist Church bombing case, had a chance, given how Republican Alabama is. But it is Moore who should never have gotten this close. There is no alibi in this story for the members of the Republican establishment who, after Moore defeated their preferred candidate, Luther Strange, sighed and supported him, only to back away when the Washington Post broke the story of Moore’s alleged molestation of a fourteen-year-old girl when he was a lawyer in his thirties, and his pursuit of others only slightly older. That was followed by more, similar accounts; Charles Bethea reported, for The New Yorker, about how Moore had been a notorious presence at a mall in Gadsden. (Moore has denied the allegations.)

But to have supported Moore before the stories of the teenagers emerged, as the Senate Majority Leader, Mitch McConnell, did, including with funds from pacs beholden to him, was to support Moore after he had confirmed that he did not believe that Muslims should be allowed to serve in Congress. That alone ought to have been disqualifying. How would Republican senators have looked their Muslim constituents in the eye (and there are Muslim Americans in every state)? How would they have looked at themselves in the mirror? The support from McConnell and others also came after Moore had talked about instituting criminal penalties for homosexuality. It came after Moore said that America had been great during the era of slavery when, he argued, family ties really mattered. It came after a rally at which he referred to Native Americans and Asian-Americans serving in the military as “reds and yellows.” It came after he mooted theories about birtherism and all manner of conspiracies, human and divine. (This included suggesting that the 9/11 attacks were God’s punishment for, among other things, America’s acceptance of reproductive rights and “sodomy.”) In the last week of the campaign, CNN ran a story about a 2011 interview in which Moore said that many of the nation’s problems could be solved by getting rid of every amendment to the Constitution after the Tenth, which would include everything from emancipation and full citizenship for black Americans to the right of women to vote. For Republican leaders to act blindsided that such a man might have other character flaws is a dubious position.

Richard Shelby, Alabama’s other senator, and (since the end of the Dixiecrat era) a Republican, caused a stir by saying, on the Sunday before the election, that he could not vote for Moore because Alabama “deserves better.” Instead, he used his absentee ballot to write in “a distinguished Republican name,” which he declined to specify. Jones and others trumpeted Shelby’s position, and it may have made a difference; 1.7 percent of the votes were write-ins, a proportion greater than Jones’s margin of victory and higher than what Alabama usually sees. Perhaps it also helped to keep some Republican voters home. And yet Shelby, when it comes down to it, was still encouraging a vote for someone other than Jones, the only person who could beat Moore; and he waited until two days before the election to do it. (He did get his say in before a final rally at which Moore’s wife, Kayla, decided to defend her husband against charges of religious bigotry by saying, “One of our attorneys is a Jew.”) Simply driving people away from electoral politics is not, in the long term, a healthy answer to the problem of candidates like Moore in a functioning democracy.

The Republican Party had an opening, early on, to mount a real write-in campaign; it didn’t take it. There is little for anyone in the Party to take credit for now. Steve Bannon, the President’s former strategist and adviser, associated himself with the Moore campaign, and Tuesday was a significant loss for him, though it would be a mistake to underestimate what his prominence in the campaign also gained him, in terms of his efforts to position himself at the nexus of a political network. But, although Bannon was more visible, he was not alone, either in his proximity to Moore or in his raw opportunism. Or in his capacity for rationalization: on Wednesday morning, Trump tweeted, “The reason I originally endorsed Luther Strange (and his numbers went up mightily), is that I said Roy Moore will not be able to win the General Election. I was right! Roy worked hard but the deck was stacked against him!”

Moore lost because Jones beat him. He did so with the help of the national Democratic Party, and its associated resources, but also by presenting himself as a person who believed in certain principles and in the state of Alabama. He also, notably, won without backing away from his support for reproductive rights. He will have to run again in three years—since this was a special election for a seat left open by the appointment of Jeff Sessions as Trump’s Attorney General, Jones doesn’t get a full term. That will be a tough race, but, if nothing else, Jones will again have a better shot than any Democrat has had in a while. One of the criticisms that Barack Obama, among others, levied against Hillary Clinton’s campaign is that it did not work hard enough to persuade voters who weren’t already inclined to vote for her to change their minds. A Democratic win in red Alabama, as peculiar as this race was, may encourage more ambitious outreach in the midterms. It should.

The corruption of the Republican Party is not, or is not simply, one of tolerating candidates with personal flaws. (The Democrats have a measure of that, too.) It has been ideological. Doug Jones, with his hard-fought campaign, saved the Republicans from having to sit next to a gaudy incarnation of the present-day G.O.P. in the Senate chamber. But the ugliness is still there, and the Republicans can choose either to confront it or to debase themselves further. They might start in the coming days, as Moore, whose speech on Tuesday night, after the results came in, was a dark and Psalm-punctuated whine, said that he wouldn’t concede because he expected a recount. (The margin, though, was too large to trigger an automatic one.) For the moment, congressional Republicans appear busy trying to rush the tax bill through before Jones shows up and cuts their majority in the Senate to a single vote. McConnell indicated on Tuesday that he had a backup plan for that: stall on seating Jones until the new year. He did manage, after all, to kill Obama’s nomination of Merrick Garland as a Supreme Court Justice by delaying it until Trump became President. But some reckonings can’t be put off forever.