Rapper Eminem Continues His War Of Words With Trump 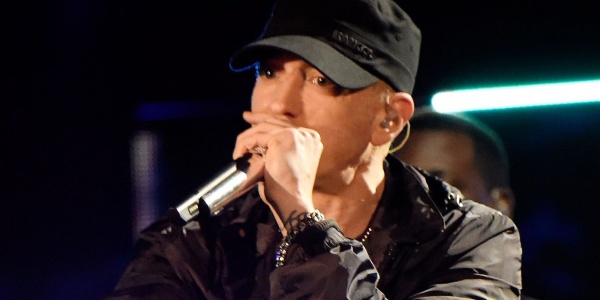 The rap icon’s new album ‘Revival’ will take on Trumpism. And for an MC who’s long spoken to white American men who feel ‘left behind,’ his epiphany couldn’t come at a better time.

“Seems like the average lifespan of a white man / Is more than twice than a black life span / I wonder sometimes if it has a price scanner / I feel like checking out on life, can’t escape this circumstance / I’d rather hear ‘em say ‘Die N-word’ than Die Antwoord / Ninja, now it’s better disguised banter / But that’s life, strapped ‘cause we’re strapped financially / And can’t find answers…” --Eminem – “Untouchable”

Eminem’s new album Revival promises to be a political statement about our turbulent times. The 45-year-old rapper has never shied away from political commentary; he examined his own privilege on 2002’s “White America” from the critically acclaimed Eminem Show, and his 2004 album Encore featured a direct verbal assault on the Bush administration in “Mosh.” But on the heels of his much talked-about performance in his standalone BET Hip Hop Awards cypher, Em has thrown himself into the center of the national dialogue on race, Donald Trump, and white supremacy.

“I was and still am extremely angry,” Em said during an appearance on Shade 45. “I can’t stand that motherfucker. I feel like he’s not paying attention to me. I was kind of waiting for him to say something and for some reason, he didn’t say anything.”

As the conversation surrounding race in America has become more urgent over the past four years, most white pop stars have been lukewarm or evasive in joining the debate. Even while staunchly supporting the “Me Too” movement or standing with the LGBTQ community on hot-button issues, there’s a noticeably muted response to what has been going on in regards to racism in America. In hip-hop, mainstream white rappers have been slightly more vocal: Mac Miller has slammed Trump and Macklemore has clumsily attempted to address white privilege, and Alabama-born Yelawolf reconsidered his position on the Confederate flag after coming under fire for defending it in 2015 (Iggy Azalea has more or less been a non-factor).

But in Eminem, you have the most celebrated white rapper of all time attacking these subjects in what sounds like his most intentionally topical album to date. The cypher drew raves from those who thought it was a potent statement against racism—and collective yawns from anyone who believed calling out Trump was the easiest target for a rapper with his own problematic history.

In a sit-down with Elton John for Interview magazine, Em explained the cypher performance. “It’s something that I’m definitely very passionate about. If I’m not passionate about it, I can’t write it. I can’t fake it,” Em said.

Since his emergence at the tail end of the 1990s, much of Eminem’s appeal has been centered on how relatable he is for the beleaguered, downtrodden white men of his generation. While creating within hip-hop, the Detroit native’s own hateful lyrics about gays and women seemed to be born of the kind of blue-collar bigotry that informs much of American racism—the idea that white men aren’t getting what they deserve and it’s because of “them.” Immersing himself in hip-hop may have made him more cognizant of white supremacy, but it gave him a major blind spot as it pertains to women and LGTBQ individuals. As a teenager who loved KRS-One and X Clan, a bitter young Eminem still felt compelled to record a song slamming Black women. And even as the elder Em takes aim at those who have chosen to align themselves with an unqualified demagogue occupying the presidency, his scope is limited if he isn’t also calling out the misogyny and homophobia that’s been just as glorified under Trump’s rise.

Because of Eminem’s appeal to the white male who believes himself to be the most forgotten, most put-upon, most voiceless in today’s America, there’s hope that he can challenge his fan base to examine their hate. The MAGA generation that came of age on his music isn’t all that different from Kid Rock’s red-leaning modern-day fans, and Em calling out the ignorance and fear is a welcome counter to what many of those corners of the country usually get from their favorite artists—that is, silent endorsement or outright approval. And while it's easy (and understandable) to dismiss this “so woke” Eminem as all too convenient, he is still necessary in that a challenge has to be issued for white superstars to not be complicit in the most toxic aspects of their fan bases.

But as fans await the latest LP from Marshall Mathers, expecting some burst of socio-political brilliance, it’s important to recognize how Eminem still benefits from being white and still has to be challenged to do more to address the hate that he himself has often endorsed. He’s the best-selling rapper of his generation and has been lauded with awards consistently for fifteen years, while also delivering some astonishingly hateful lyrics that would have never been accepted by the mainstream on the same level had he not been so easily marketed to middle America. Em knows that. In approaching his current music, it seems he also knows that he’s gotten here by speaking to the same guys who voted for Trump. Maybe this is his way of reconciling with that.