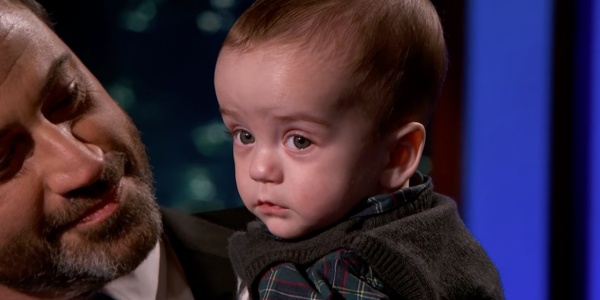 Date Posted: Tuesday, December 12th, 2017
Jimmy Kimmel reentered the national healthcare debate on Monday, ripping congress for failing to fund the Children's Health Insurance Program (CHIP), which "covers around nine million American kids whose parents make too much money to qualify for Medicaid but don't have access to affordable coverage through their jobs."

"No parent should ever have to decide if they can afford to save their child's life," Kimmel says
Kimmel told his viewers how important it was to support CHIP while holding his infant son Billy, who underwent open-heart surgery last week. "Daddy cries on TV but Billy doesn't," Kimmel joked, smiling through tears.
He reminded viewers that other children who require operations or other forms of urgent, costly medical care may be in jeopardy. "Congress failed to approve funding for CHIP for the first since it was created two decades ago," Kimmel explained. "This is literally a life and death program for American kids, they've always had the money for it. But this year, they let the money for it expire while they work on getting tax cuts for their millionaire and billionaire donors."
Billy's latest operation was his second this year, Kimmel said. He needed immediate surgery when he was born in April.
Following that initial operation, Kimmel made an impassioned plea on television for quality, affordable healthcare access for all. "If your baby is going to die, and it doesn't have to, it shouldn't matter how much money you make," Kimmel said at the time. "Whether you're a Republican or a Democrat or something else, we all agree on that."
Unexpectedly, Kimmel's speech transformed him into a player in the national healthcare debate. In September, Louisiana Senator Bill Cassidy, co-sponsor of the Republican Graham-Cassidy bill that proposed as a replacement for Obamacare, declared that his legislation passed "the Jimmy Kimmel test," i.e., did not discriminate against poor patients or those with pre-existing conditions. Kimmel then accused Cassidy, on-air, of "[lying] right to my face."
Kimmel continued advocating for equitable access to healthcare on Monday night, again arguing that funding affordable healthcare for children should be an easy issue to support regardless of political affiliation. "It's not a partisan thing," he stressed. "The last time funding for CHIP was authorized was 2015. It passed with a vote of 392 to 37 in the House and 92 to 8 in the Senate. Overwhelmingly, Democrats and Republicans supported it."
Kimmel urged his viewers to call their senators and representatives and demand that they fund CHIP immediately. "I don't know what could be more disgusting than putting a tax cut that mostly goes to rich people to ahead of the lives of children," he said.