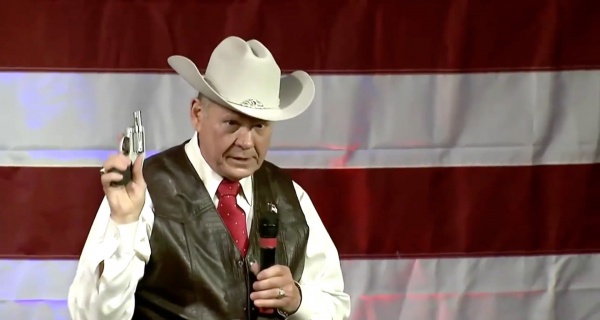 While some evangelicals are staunchly standing by the embattled Alabama Senate candidate Roy Moore, a grassroots network of Christian leaders in the state are joining forces to present a different image of Christianity.

Dozens of Alabama ministers have signed a letter that calls out Moore’s “extremist beliefs” and says that no person of faith should be able to support him.

“Even before the recent allegations of sexual abuse, Roy Moore demonstrated that he was not fit for office, and that his extremist values and actions are not consistent with traditional Christian values or good Christian character,” the pastors wrote in the letter. “He and politicians like him have cynically used Christianity for their own goals. But Roy Moore does not speak for Christianity, and he acts in ways that are contrary to our faith.”

More than 55 Alabama pastors initially signed the open letter on Nov. 16. Hundreds of other ministers and lay Christians from within and outside of Alabama have added their names to the campaign after it was posted online on Nov. 18 to the petition site Groundswell, operated by New York’s Auburn Theological Seminary.

The ministers from Alabama appeared to be predominantly from mainline Protestant churches, which are a minority in Alabama’s largely evangelical Protestant religious landscape. Other signers were from historically black Baptist congregations or non-denominational congregations.

Since early November, Moore has been battling allegations that he sexually assaulted or targeted teenage girls when he was in his 30s. Moore has repeatedly denied the mounting attacks against his character, claiming that they are politically motivated.

Some evangelical Christian leaders have stood firm in their support of the candidate, while others are wavering.

But for progressive Christians in Alabama, the allegations against Moore were another nail in the coffin, reinforcing a view of him that has been negative for quite some time.

Moore, a Southern Baptist, long has been a controversial figure in Alabama’s politics - and nationally, as well. He’s been booted from his post as chief justice of the state’s Supreme Court twice- first, for refusing to remove a Ten Commandments monument from the state judicial building, and later for ordering probate judges to refuse to issue marriage licenses to same-sex couples after the 2015 U.S. Supreme Court decision legalizing such unions.

The pastors’ letter refers to Moore’s virulently anti-queer and anti-Muslim stances, as well as his championing of Christian nationalism.

Rev. Dr. Dave Barnhart, Jr., who pastors a group of United Methodist house churches in Birmingham, Alabama, brought the campaign to Groundswell. He told HuffPost that the idea for the letter began organically on a Facebook post, after some clergy suggested responding together to the news that conservative Christian pastors in Alabama had released a letter endorsing Moore. (It turns out this endorsement was actually a re-release of an earlier letter written in August, and that some of the signatories had not been contacted about the update).

Barnhart said he hopes the letter will encourage voters who don’t typically show up to the polls to take part in Alabama’s Dec. 12 special election. He also hopes to reach conservative Christians who are on the fence about Moore.

Another target audience is non-Christians, he told HuffPost.

“I would hope that for those who have rejected Christianity because they think it means being authoritarian, anti-gay, and anti-Muslim, that they would hear that Roy Moore does not speak for us,” Barnhart said in an email.

This desire to present an alternate vision of Christianity is also what motivated Rev. Jennifer Sanders, pastor of Beloved Community Church in Birmingham, Alabama, to sign the letter. She told HuffPost in an email she believes the letter “disrupts the illusion of consensus, the notion that Christianity in Alabama speaks only with a fundamentalist voice.”

“I signed the letter because in his career Roy Moore has consistently advanced an agenda that denies that all people ? in our beautiful diversity ? are made in the image of God,” she said. “His demagoguery contradicts the continual Gospel emphasis on siding with the marginalized.”

Adam Mixon, pastor of the Zion Spring Baptist Church in Birmingham, told HuffPost his congregation tends to be conservative on moral issues. But because of its history as a black church in a poor neighborhood, the church’s politics tend to lean toward supporting minorities.

The sexual assault allegations against Moore simply solidified Mixon’s resolve to reject the candidate and his policies.

“I hope signing the letter causes others to begin to question the inconsistency in application of the core Christian principle of ‘loving one’s neighbor’ by many white conservative evangelicals,” he said.

Rev. Carolyn Foster, a deacon at St. Mark’s Episcopal Church in Birmingham, told HuffPost that Moore’s policies reminded her of the “violence, injustice, and abuse of power” once sanctioned by Christians in the segregated South.

She signed the letter because Moore’s brand of Christianity “does not align or even closely resemble” the nature of God.

“For me, it is not about being a progressive or a conservative Christian; it’s about being right or wrong as it relates to Christian teachings and values,” she said. “Christian allegiance should be to God, not party affiliation. I pray this letter embolden more Christians who feel as I do to speak up against the misuse of the faith.”

An Open Letter From Alabama Pastors About Roy Moore

Even before the recent allegations of sexual abuse, Roy Moore demonstrated that he was not fit for office, and that his extremist values and actions are not consistent with traditional Christian values or good Christian character. He and politicians like him have cynically used Christianity for their own goals. But Roy Moore does not speak for Christianity, and he acts in ways that are contrary to our faith.

Christianity affirms God’s love for the neighbor and care for the most vulnerable in society: the widow, the foreigner, and the orphan. But he has denigrated people from other countries and other faiths. He opposes the expansion of Medicaid which would provide basic healthcare for over 400,000 poor and working poor Alabamians. He seeks to deny the most basic civil rights of our fellow citizens. He has used racial slurs and casually referred to state-sponsored violence against lesbian and gay families. He has sought to deny children without parents access to loving families on the basis of sexual orientation. Kindness and justice toward widows, orphans, and foreigners are priorities in the Bible but they are not priorities for him.

Christianity thrives in religious freedom from government interference, and a government impartial toward people of all faith traditions. But instead he has sought to entangle government with religion. He has preached vehemently against Islamic religious law but he has sought government affirmation of his religious extremism and nationalism. He has claimed civil rights only apply to Christians.

Christianity rejoices in the truth and affirms the rights of abuse survivors to tell their stories without silencing. Christianity abhors sexual coercion and violence. We acknowledge that many people have been victims of sexual assault and abuse in our own places of worship. Clergy misconduct has done real and lasting harm, both physically and spiritually. We repudiate the actions of religious and political leaders like Roy Moore who have sought to silence, to cover up, and to be complicit in the sexual abuse. These actions reopen the wounds of anyone who has been abused by leaders who should have been committed to compassion, to justice, and to healing God’s world.

We clergy write and sign this letter not as representatives of our own congregations but as individual faith leaders compelled by conscience to speak. Our intent is not to tell anyone how to vote, but to urge the people of Alabama to vote their conscience, regardless of political affiliation. It is our belief that in light of Roy Moore’s extremist beliefs, his patterns of behavior, and the recent allegations against him, no person of faith can, in good conscience, support him or his religious nationalism. He has done harm to our government; he has done harm to our Christian witness; and he has done harm to vulnerable people.

We do not make this statement lightly. We do so with much prayer and discernment. We believe no follower of Jesus Christ should be silent while the words of our Lord and Savior are perverted for partisan power, while our Bible is appropriated as a weapon for a false “culture war,” and while the name of our God is blasphemed by the hypocrisy of those who claim the name of Christ.