After Residing In The U.S. For 30 Years, Couple Deported To Mexico 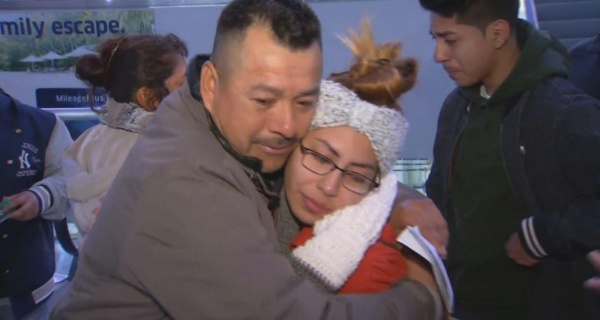 A New Jersey couple who immigrated to the U.S. from Mexico three decades ago was deported Friday, leaving behind their three American-born children.

In an emotional and religious farewell, Friday morning, Oscar and Humberta Campos said goodbye to their children, ages 24, 22, and 16, before boarding a flight back to their native country.

"There is no distance. I will always have them in my heart," Oscar Campos said through tears.

They boarded a 6:30 a.m. flight at Newark International Airport bound for Mexico City.

Campos said he fled violence in his hometown, Tamaulipas, and crossed the border into Texas in 1989. In their nearly 30 years of living in the U.S., the couple purchased a home in Bridgeton and had a landscaping business, the Courier-Post reported. Their two oldest children are college graduates.

On Thursday, federal immigration officials denied the couple's last ditch effort to appeal a deportation order and told them they had to leave the country.

The couple was forced to sign over a power of attorney to their oldest son so that he can care for his 16-year-old sibling, who is a sophomore in high school, and take over the home's mortgage.

Sen. Cory Booker, a Democrat from New Jersey who tried to help the Campos family in their status battle, said he is "extremely disappointed" that their stay of removal was denied, according to a statement from his office.

“Mr. and Mrs. Campos’ case reinforces the urgent need for us to stand united in seeking common sense solutions to our broken immigration system that are consistent with our core American principles," said Thomas A. Pietrykoski, Booker's state press secretary. "While Senator Booker’s office worked for months with the Campos family and federal officials on this case, we are extremely disappointed that [Immigration and Customs Enforcement] has denied the request for a stay of removal and saddened to see another family needlessly torn apart.”

Deacon Arnaldo Santos of the Parish of the Holy Cross in Bridgeton, who has been assisting the family, called the Campos couple "good parents" and noted they didn't have a criminal record, according to the Post.

"I want criminals out of this country. I want them to get locked up," Santos told the Post. "But I have known this family for over 20 years. They are respectful, spiritual ... they are a good, good family and that's why I'm petitioning."

Moments before getting on the flight, Oscar Campos gave his children some parting advice to adhere in his absence. The words seemed to be a motto he lived by in striving for a better life for his family over the last three decades.

"Fight for your dreams because life continues and you will always find good people that support you," he told them before boarding the plane. "There are a lot of good people. Don't give your hopes up."