How The World Now Views America 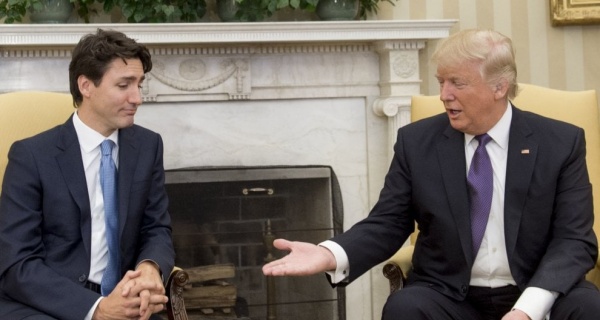 The United States of America is a great nation, and for decades, for centuries, other countries have looked to us for inspiration, for a sense of hope — for a sense of what it is possible to achieve. Countries that wanted to democratize, to get rid of the power and privilege held onto by old aristocracies, that wanted to replace corruption with honesty and transparency and justice, that wanted to counter Fascism and ideological and religious oppression — they looked to us. Now, our allies in Europe are looking for ways to fill the void left by our abdication of our position of leadership in the world. Who will stand up to Putin if he gobbles the rest of Ukraine? Who will lead NATO, if not the US? Now, China is stepping in as the leader in the fight against global climate change, since America is suddenly being run by people who believe, or pretend to believe, that science isn’t real. China will make huge amounts of money, and possibly save the world, building better and better solar panels. That could have been us. But the Trump administration tells us that coal is the future. China is also filling in the gap we left on trade, since we are suddenly going isolationist.

It’s sad to see this happen. It’s a self-inflicted wound. It has happened before — under Reagan and George H.W. Bush to some extent, and far more under George W. Bush. Republicans, when they take power, believe that “might makes right,” rather than that truth, justice and the courage of our convictions make us right and keep us strong and relevant. Republicans trash international institutions and safeguards against atrocities and instability that we helped to create and maintain after World War II (the United Nations, the Geneva Conventions) which have thus far prevented another world war and which have allowed the world to progress to where we are now — or where we were just before Trump took office. This Republican pivot away from our core values is happening on a much larger scale now, and much more rapidly than ever before. It’s ironic that Trump shouts about making America “great again” when he is the person destroying our national greatness that we had, all along, until his ascendancy. When they asked Trump how he would make America great again, right after the election, he said we’d be great again because he’d tell us we were great again. And because he’d have big military parades, he said, and put lots of weapons on display. That is literally how his “very good brain” works — that is his conception of American greatness. It’s not that far removed from Kim Jong Un’s conception of North Korean greatness …

But US exceptionalism and greatness, as understood by Obama and so many presidents before him, was not based on the size of our arsenal. It was based on ideas and values that we saw our country as embodying, and that others around the world saw us as embodying. And with the advent of Trump, all of that has been trashed.