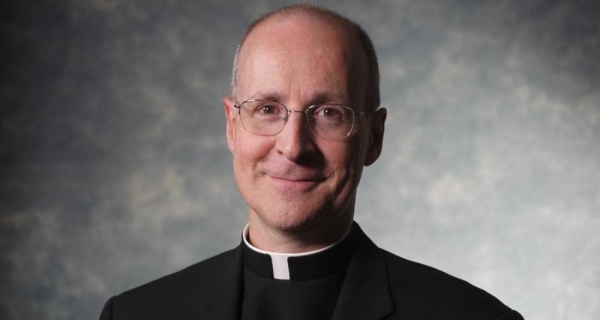 In his attempt to further exacerbate an already divided nation in order to distract from his litany of scandals, President Trump delivered a bombastic speech Monday, declaring that Christmas, like some three-ring circus, is “back, bigger and better than ever before . . . .” He intended his braggadocio as a point that “true” Americans (read: Christians only) say, “Merry Christmas,” as if the more inclusive “Happy Holidays” were somehow an assault on Christianity. Never mind that only seconds later, Trump added his own, “Happy Holidays.”

It took a humble cleric to bring the Narcissist-in-Chief back down to earth. Famous Jesuit priest, America Magazine editor, and theological author James Martin, SJ, tweeted a pointed response to Trump about the true meaning of Christmas.

Father Martin stated that, “Christmas never left” because Christmas isn’t about what coffee cup Starbucks sells or whether we say, “Merry Christmas” or “Happy Holidays.”

Christmas is about “littleness,” Martin said, caring for “the most vulnerable” among us, like a homeless baby in a manger, rather than the 1% Trump’s tax scam seeks to reward at the expense of the poor.

The holy day, the priest adds, is about “humility,” emulating the way Jesus lowered himself from divine to human form, so that the meekest among us would have a champion.

These notions are as far from the way Trump thinks and lives as Earth is from the Big Bang. The Carnival Barker President surely could never absorb the simple, resonant words Martin utters about the significance of Christmas.

However, Martin’s words serve as a reminder for the rest of us that loud mouths and empty phrases hold none of the power of simple acts of kindness and charity.