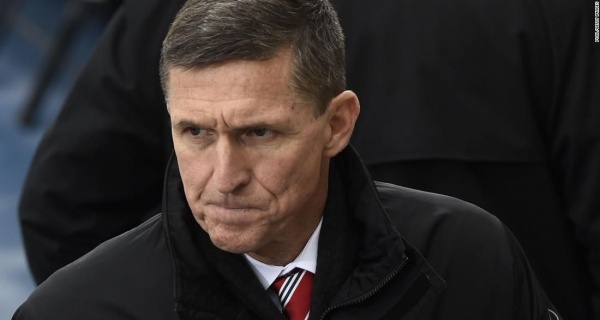 This past Valentine's Day, President Trump asked then FBI Director James Comey to stick around following a meeting with a group of national security officials in the Oval Office. It was a dramatic moment. After the others filed out, Trump made an insistent plea to Comey – who, it turns out, kept careful memos of this and other interactions he had with the president – to take it easy on General Michael T. Flynn, his national security adviser who'd been fired the previous day. "I hope you can see your way clear to letting this go, to letting Flynn go," Trump begged Comey. "He is a good guy. I hope you can let this go."

Comey, naturally, didn't let it go. The FBI folded Flynn into an official investigation into the possibility that Team Trump colluded with Russia, an inquiry that began in July 2016 after the U.S. intelligence community picked up reports of a pattern of odd contacts between the Trump campaign and an assortment of Russians. In May, Trump fired Comey over "this Russia thing with Trump and Russia," as Trump described it. Comey's ouster was a stunning event, one that led directly to the appointment of former FBI Director Robert Mueller as special counsel for Russiagate.

On Friday, this all came full circle. The disgraced Flynn – who was fired for covering up his interactions last December with Sergei Kislyak, then Russia's ambassador to the United States – pleaded guilty to charges filed by Mueller that Flynn lied to the FBI about those talks with Kislyak. Flynn's guilty plea opens the door for him to tell Mueller's team everything he knows about whether Trump's aides, associates and hangers-on colluded with, cooperated with or encouraged Moscow's scheme to intervene in the 2016 election.

That is, undoubtedly, why Trump made his special plea to Comey in February, why Trump fired Comey and why the White House has circled the wagons against Mueller's Russiagate investigation. We don't yet know how much Flynn knows about collusion – but Mueller surely would not have accepted the guilty plea he did unless Flynn had promised to, or already has, delivered some juicy information to the prosecutors and the FBI. Trump's worst fears may soon be realized.

The charges against Flynn relate to a series of discussions the general had last December, during the presidential transition, when he reportedly told Kislyak that Trump's White House might go easy on sanctions against Russia that were imposed by President Obama and asked Kislyak to sabotage a UN resolution on Israel that Obama's White House supported. They also extend to false statements that Flynn made in regard to his company, the Flynn Intel Group, in connection with his work as a lobbyist and consultant to the government of Turkey.

But having nailed Flynn – and gotten a plea agreement and Flynn's promise to cooperate with the investigation – the big question is whether Flynn can implicate President Trump, his campaign and his aides.

To start with, and there are already reports to this effect, Flynn can say it was President-elect Trump and/or other Trump aides who directed him to say what he did to Kislyak. At a minimum, that would mean Trump was covertly behind those contacts and that the president knew about the content of the Flynn-Kislyak meetings last December even as other senior officials, including Vice President Pence, were in the dark and publicly exonerated Flynn. At the very least, that's embarrassing to Pence, who ought to resign. At worst, it implicates Trump directly in working, secretly and behind the scenes, to undermine Obama's foreign policy while the former administration was still in charge.

Next, Flynn can tell Mueller what, if anything, he knows about the contacts between Russia and a series of Trump officials in 2016, including meetings, emails, phone calls and trips involving Paul Manafort, Rick Gates, Donald Trump Jr., Jared Kushner, Carter Page, Roger Stone and George Papadopoulos. Mueller has already indicted Manafort, Trump's campaign manager, and Gates, his deputy campaign manager and a longtime Manafort associate, on charges involving money laundering and other offenses, and it's not known whether Manafort and Gates might also decide to tell all to Mueller in exchange for a deal. Meanwhile, Papadopoulos, a low-level campaign staffer, is already doing so, after he was nailed for lying about his own, repeated contacts with Russia, including the fact that Russia had "dirt" on Hillary Clinton and "thousands of emails."

And it was Manafort who joined Don Jr. and Kushner in a now-famous meeting in Trump Tower in July 2016 in which a delegation of Russians promised to deliver "dirt" on Clinton directly from the Russian government.

As Trump's chief national security campaign aide throughout 2016, Flynn could have a lot to say about all this. Trump, who publicly fretted about his desire to have Mueller wrap up his investigation sooner rather than later, and who supposedly will "blow a gasket" if he isn't exonerated by year's end, will now watch as Mueller proceeds full steam ahead, bolstered by Flynn's input. The same goes for the investigations by the House and Senate intelligence committees, despite the fact that during a closed-door meeting with GOP senators this week Trump implored the Senate committee to wrap up its own inquiry. (Like Mueller's long march, the two congressional committees aren't looking to shut down anytime soon.)

Mueller's charging documents state bluntly that Flynn interfered with the FBI's inquiry into Trump-Russia collusion. "Flynn's false statements and omissions impeded and otherwise had a significant material effect on the FBI's ongoing investigation into the existence of any links or coordination between individuals associated with the campaign and Russia's efforts to interfere with the 2016 presidential election," the document declares.

Meanwhile, let it sink in: Already, Trump's chief national security aide, his campaign manager and his deputy campaign manager have all been indicted on criminal felonies. And there's more to come.

During the Republican National Convention in July 2016, when Trump was officially nominated as the GOP's candidate, Flynn led the entire convention in a repeated chant of "Lock her up! Lock her up!" On Friday morning, as Flynn hurriedly exited the federal court building in Washington, D.C., after making his guilty plea, a spectator held high a simple, hand-lettered sign: "Lock him up!"