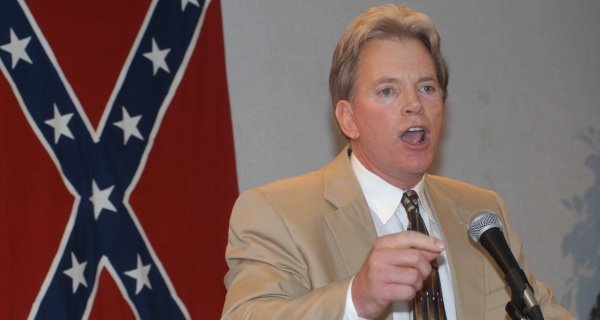 Date Posted: Wednesday, November 29th, 2017
Former Ku Klux Klan leader David Duke professed his love of Donald Trump after the president re-tweeted Wednesday morning several videos that appear to show Muslim men destroying Christian relics and assaulting non-Muslim men. Duke praised Trump for sharing the three videos, claiming the mainstream media wouldn't show them.
“Trump retweets video of a crippled white kid in Europe being beaten by migrants, and white people being thrown off a roof and then beaten to death, He's condemned for showing us what the fake news media WON'T. Thank God for Trump!
That's why we love him!” Duke wrote on Twitter.
Duke’s love fest of Trump continued as he tweeted another tweet praising the president and blaming the media for not covering racist attacks on white people. “This is why WE LOVE TRUMP and WHY the FAKE NEWS MEDIA HATES TRUMP. He brings to light what the lying, Fake News Media Won't. The truth is the media covers up horrific numbers of racist hate crimes against White people!” Duke tweeted shortly after.
The videos were originally posted by Jayda Fransen, deputy leader of Britain First HQ, an anti-Islam political party. The first video shows a man leading a teenaged boy to the roof of the building and pushing him over the edge. When he hit the ground, a large group of men began kicking him and punching him to death.
The second video Fransen shared was of another Muslim man holding a porcelain statue of the Virgin Mary. The man said something in Arabic before throwing it to the ground, shattering the religious figure into pieces.
The third video shows a man kicking a disabled teenager on crutches.
Duke, a white supremacist, has always had a lot of love for Trump. During a press conference in August after white nationalist riots in Charlottesville, Virginia, Duke praised Trump for blaming both the white supremacists and counter-protesters for the violence that broke out. “Thank you President Trump for your honesty & courage to tell the truth about #Charlottesville & condemn the leftist terrorists in BLM/Antifa,” tweeted Duke.
After Trump was elected president in November, Duke said the victory was "one of the most exciting nights of my life." "Make no mistake about it, our people have played a HUGE role in electing Trump!" he wrote on Twitter.