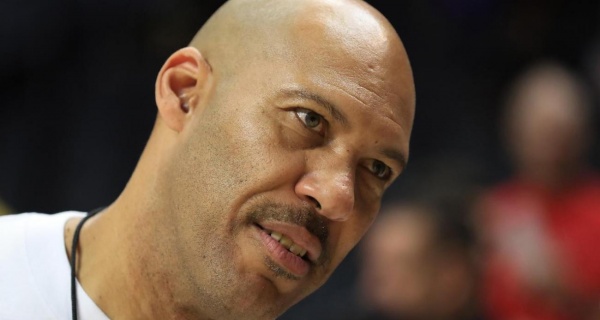 Thanksgiving is around the corner, but LaVar Ball isn't exactly in the thankful spirit.

The outspoken basketball dad sat down with Chris Cuomo on “CNN Tonight” Monday evening to discuss his son LiAngelo’s recent shoplifting arrest in China and LaVar’s insistence that he does not need to thank Donald Trump for his apparent help in freeing LiAngelo and the other two UCLA players arrested.

Rather than engage in serious discussion, Ball proceeded to troll the CNN host.

“It just doesn't make any sense why you didn't thank him,” Cuomo said.

“Did you thank the doctor for bringing you into this world?” Ball asked.

“Well you better go back and find him, ‘cause you lucky,” continued Ball, laughing.

Trump went on a Twitter tirade Sunday shortly after Ball tried to downplay the president’s involvement in his son’s release.

“Now that the three basketball players are out of China and saved from years in jail, LaVar Ball, the father of LiAngelo, is unaccepting of what I did for his son and that shoplifting is no big deal,” Trump tweeted.

“I should have left them in jail!”

Ball previously told ESPN the day prior he was frustrated with people exaggerating the incident as a whole and Trump’s role in the three players’ safe return.

“Who?" LaVar Ball told ESPN on Friday when asked about Trump's involvement in the matter. "What was he over there for? Don't tell me nothing. Everybody wants to make it seem like he helped me out.”

LiAngelo and the two other players apologized for their actions and thanked Trump in their respective statements Wednesday.

LaVar later told Cuomo he would have thanked Trump had he taken all three players back to the U.S. with him on Air Force One.

“I would've said 'Thank you' if he would've put him on his plane and took him home,” Ball said. Then I would've said, ‘Thank you, Mr. Trump, for taking my boys out of China and taking them back to the U.S.’

“There's a lot of room on that plane. I would have said thank you kindly to that.”

Shockingly, Ball even suggested he did more to expedite the release of his son than Trump, an argument that took the loudmouth father to make during the nonsensical interview Monday night.

"I had some people that had boots on the ground that knew the situation when we first got there," Ball said, when Cuomo asked if he did more to help than Trump.

Cuomo repeatedly pressed Ball into thanking the President but he adamantly declined to do so.

He was, however, more willing to thank Chinese President Xi Jinping for the release of his son.

Instead of giving thanks to Trump, Ball capped off his interview by asking the anchor to pass along a message to his new foe.

“Tell Donald Trump to have a great Thanksgiving because Big Baller is,” Ball added, grinning.