A Rundown Of Potential Contenders For The 2020 Election 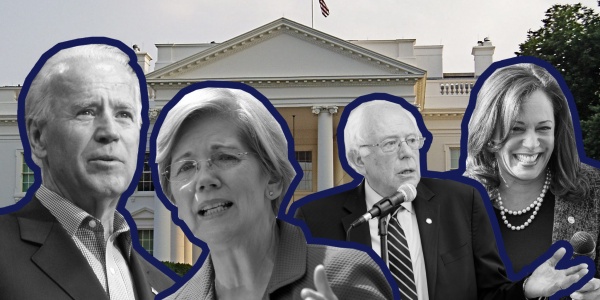 Date Posted: Monday, November 20th, 2017
We might be only one year out from the presidential election that landed President Donald Trump in the Oval Office, but speculation over who might make a run for the White House in 2020 is already in full swing. Who could run for president in 2020? It's still far too early to know exactly who might be serious about throwing their hat into the ring, but there are at least a few names that seem probable.
Former Vice President Joe Biden
On Monday, former Vice President Joe Biden reignited the ongoing will-he-won't-he conversation during an interview with The TODAY Show to promote his new book, Promise Me, Dad: A Year of Hope, Hardship, and Purpose. In his chat with hosts Savannah Guthrie and Matt Lauer, Biden said he hadn't yet made up his mind about a 2020 presidential run, but added, "I'm not closing the door. I've been around too long."
That might be exciting news for anyone who's been #TeamBiden since he ultimately opted not to run for the Democratic ticket in 2016. At the time, Biden said that his family's grief following the death of his son, Beau, was his top priority, according to CNN, but in January, he admitted that he "[regrets] it every day." As for who he might go up against if he does decide to run? There are a few possibilities.
Sen. Bernie Sanders
Vermont Sen. Bernie Sanders was a popular democratic candidate in 2016, with many left-leaning voters proudly chipping in with their infamous $27-average campaign donation in hopes that he would take the DNC ticket. In the end, he lost out to Hillary Clinton, but looking ahead to 2020, it's possible he could end up taking it.
Sanders hasn't yet said that he would be running, but he also hasn't ruled it out. If he does run though, he'll likely be in a pretty good spot: in July, Vox deemed Sanders to be "the Democrats' real 2020 frontrunner," thanks in part to his continued well-received public presence, while a University of New Hampshire poll in October found that Sanders topped a poll of potential Democratic candidates for 2020, with nearly one-third of the vote.
Sen. Elizabeth Warren
Third in the New Hampshire poll, behind Sanders and Biden, came Massachusetts Sen. Elizabeth Warren. In 2016, Warren backed Clinton's presidential bid, but in 2020, many are expecting to see her launch her own campaign. Like, Biden and Sanders, Warren is a popular choice — thanks in part to her unapologetic criticism of Wall Street and the "1 percent." She's also been a vocal critic of Trump and the GOP, despite being a regular target of his tweets and racial slurs, according to The Independent. But most recently, many on social media were left unimpressed when she said she thought the Democratic National Committee was "rigged" in favor of Clinton, according to CNN, arguing that it was a betrayal of the former Democratic candidate.
Sen. Kamala Harris
California Sen. Kamala Harris — aka the first African-American attorney general in her state — has definitely seen her political star rise over the past year. She's spoken out against Trump, ruthlessly questioned Attorney General Jeff Sessions about alleged Russian election interference during a Senate intelligence committee hearing, according to The New York Times, and has supported popular Democratic issues like single-payer healthcare, criminal justice reform, and gun safety legislation. Harris hasn't said if she'd be running, and she's not quite on the forefront of the 2020 radar. But if she does run, she'd be in a good place to pick up where Clinton left off in an attempt to be the first female POTUS.
Mark Cuban

Billionaire entrepreneur Mark Cuban might not seem like the type to run for president, but given that Donald Trump is currently the Commander-in-Chief, it's clearly anybody's game at this point. According to CNBC, Cuban has expressed interest in running for president in 2020 as an independent candidate, and in March, Cuban took to his blog to discuss his own ideas for a health care plan to replace the Affordable Care Act. One highlight? Cuban argued that Americans "should be covered 100 [percent] for chronic physical or mental illness and for any life threatening injury."
Gov. John Kasich
Ohio Gov. John Kasich may have dropped out of the 2016 presidential race as it became clear that Trump was closing in on the Republican ticket, but it certainly sounds like he has plans on challenging the incumbent in 2020. Kasich has made no secret of his disdain for many of Trump's decisions— he called the president's remarks after Charlottesville "pathetic," spoke out against the proposed GOP tax plan, called for a ban against bump stocks, and recently denounced Roy Moore in an interview with CNN, according to The Washington Post, saying he thought "he should step aside" — and he's been unafraid of criticizing the GOP and offer up suggestions for a new direction. It's unclear though, whether Kasich will be able to win over Trump's supporters in 2020, many of whom see him as far too liberal for his platform.
Donald Trump

Trump has, of course, already spoken publicly about his expectation that he will not only run in 2020, but that he will win. As the incumbent, many GOP strategists are expecting Trump to easily take the 2020 GOP nomination if he wants it, according to CNN, even despite his reported record-breaking low approval ratings. But it's also possible that Trump may not actually run: according to The Independent, New Jersey Gov. Chris Christie recently expressed doubts that Trump would be up for another term. Christie said,
If he runs again I would support him, yes, but I'm not so sure what will happen ... Four years is a long time, and especially for someone who has not spent a lifetime in politics, so I think those years affect him differently. So I'm sure the president will make whatever decision is best for him and his family and the country.

Ultimately, the 2020 election is still a long way away, and so much can happen that would change the game — especially with someone as unpredictable as Trump in office. But it's clear that there are many people who might be up to challenge him for the presidency, so chances are good that the next election cycle is going to bring out some really solid contenders.