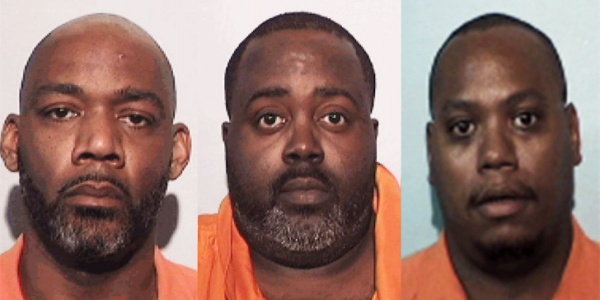 A third Ohio pastor has been indicted on charges of sex-trafficking a minor, and now all three men face new charges in the case after a federal grand jury indicted the Rev. Cordell Jenkins, the Rev. Anthony Haynes and the Rev. Kenneth Butler on conspiracy to sex-traffic children.

All 3 men pleaded not guilty. According to the U.S. Attorney's Office, a 14-year-old girl was sexually assaulted by all three pastors in 2014. It was during this time that the men were believed to begin their conspiracy to entice girls to have sex for money.

Between 2014 and 2017, Rev. Haynes allegedly prepared the girl to become a prostitute. He is accused of recording the sexual assaults on his cellphone and giving her money after. He then instructed the girl not to tell anyone because of the consequences it could have on his church and family, according to prosecutors. Haynes also is accused of introducing the teen to other men for sexual activity.

According to prosecutors, Rev. Jenkins is believed to have sexually exploited the same unidentified girl at her home and a motel between December 2016 and March 2017. Prosecutors said he paid the then 14-year-old $100-$300 to stay quiet after they’d have sex. Jenkins is also accused of paying for sex acts with a second underage girl in March.

Rev. Butler is charged with trafficking a third underage girl between 2015 and March 2017. According to court documents, the girl told investigators she met Butler at Haynes' church when she was 15. The girl said Butler would give her rides home and she had sex with him in his car twice. After one encounter, he gave her money, prosecutors say.

Both Haynes and Butler are charged with obstruction of a sex trafficking investigation. Haynes allegedly attempted to destroy electronic evidence while Butler allegedly told a person to lie to law enforcement.

“These three men violated the trust of these children and the communities they purported to serve,” U.S. Attorney Justin E. Herdman said, according to the Toledo Blade. “We are grateful for the courage of the victims and the dedication of our law-enforcement personnel in bringing these men to justice.”