Because Of Her Support Of Trump, Paula White Is Losing Church Members And Donations 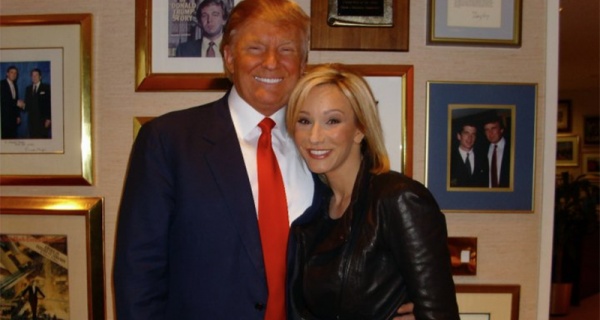 Popular televangelist and President Donald Trump's spiritual adviser, Paula White, reportedly lost hundreds of members and thousands of dollars in weekly donations from her predominantly black congregation at New Destiny Christian Center in Apopka, Florida, because of her relationship with the president, her only child and associate pastor at the church, Bradley Knight, says.

"Her relationship with the black community got really frayed because of President Trump," the almost 32-year-old Bradley revealed in a report in The Washington Post on Tuesday. "She got messages from black leaders, saying, 'You betrayed us.'"

Knight revealed to The Washington Post that New Destiny lost between 200 to 300 people because of his mother's support of the president and that giving has dropped off by $10,000 weekly.

Despite the claims made by Knight, however, the loss of members at the church appears to have started as far back as 2011 when his mother, who was accused of deception in her takeover of the church, assumed the lead pastor role when co-founder Zachery Tims died.

Tims' ex-wife and co-founder of New Destiny, Riva Tims, who tried to stop White's takeover of the church, told The Christian Post earlier this year she has no idea what has happened with New Destiny since White took it over with 8,000 members, but suggested "it's very quiet over there."

Sources who say they have worked closely with New Destiny in the past told CP that attendance has dropped dramatically since White took over and they estimate the congregation currently stands at about 500. A telephone operator told CP earlier this year that weekly attendance was about 1,000. It is unclear if this number has held.

The Christian Post contacted the church and White's publicist Johnnie Moore for comment Friday and will update this article when a response is received.

During the search to replace Zachery Tims at New Destiny in 2011, White was accused of "strong-arming her way as the newly installed pastor there."

At the time, Bishop Ira V. Hilliard, a well-known and influential Texas minister who leads New Light Christian Center Church in Houston, resigned from the board of bishops charged with helping the church during the pastoral search.

"My commitment to integrity will not allow me to support something that I believe is deception and that compromises previously agreed upon procedures and protocol," he said.

According to The New York Times, White's former ministry, the Without Walls International Church, was one of six investigated in the past decade by the Senate Finance Committee over possible financial improprieties.

At the time, White and her ex-husband, Randy, refused to cooperate with the inquiry, and kept their lavish spending hidden behind tax laws that allowed religious organizations to operate tax-free with little transparency, the Times said.

When asked how she felt about White's role as a spiritual adviser, Tims said that isn't a roll she would recommend for White.

"Honestly, I don't get the connection there. I don't know her really [but] based on the history that I have experienced with Paula White, I couldn't receive from Paula White. That's just me," she said.

Tims currently leads the 1,700-member Majestic Life Church in Florida, and released a new book this year, titled When It All Comes Together. It focuses on recovering from her husband's death and losing New Destiny to White.

"We're in the same city but honestly we don't know anything that's going on at New Destiny. It's very quiet over there. ... I do love Paula White with the love of Christ, but as far as her ability to advise the president of the United States, I would not recommend it. I could not give a recommendation because I don't know her like that," Tims added.

In her role advising the president, White told The Washington Post that she is his "safe place."

"I don't preach to anyone on behavior modification," she said. "There are things I can speak, but that's not anyone's business what I say. Why would I as a pastor expose that relationship? Everyone needs a safe place in life, and pastors can be people's safe place. That's why I have this relationship, because I don't talk about it."

She says to ensure that she does justice to her adviser role, she spends an hour a day in prayer and Bible study and tries to fast one day a week. She also goes on a longer fast once each month.

"If I am not fresh with God, I might as well hang it up. You can't be a spiritual adviser and not pray," she said.