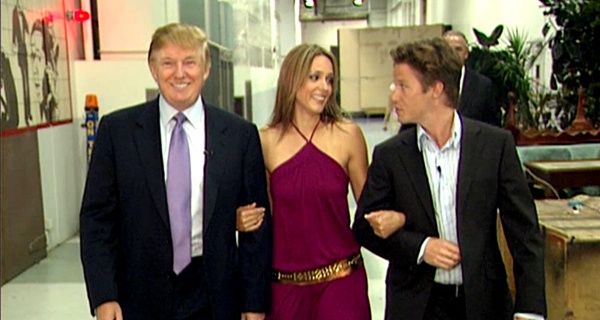 We're in the midst of a unique moment in modern history. Women are speaking up about the mistreatment they've suffered at the hands of powerful men – and people are actually listening. Whether the end result will be a backlash or a radical reconfiguration of power dynamics in the workforce is yet to be seen, but there's no denying that something new is happening regarding sexual harassment, assault and abuse.

The immediate responses from Hollywood and Republican politicians have been telling.

Remarkably, however, the highest-profile person in the nation, whose treatment of women is notably checkered, has largely escaped this current round of scrutiny. That has to change now. President Trump has to be put under this newly glaring spotlight.

This new round of attention on sexual harassment and abuse started with women – and some men – speaking up about powerful people in the entertainment industry. But, as many people appear to be learning, this problem is not relegated to Hollywood: Stories have also flooded out from the media, restaurant and other industries, with victims who had been afraid or unable to speak up in the past starting to name names at an unprecedented rate.

And then there's politics. Numerous women have come forward to accuse U.S Senate candidate Roy Moore of child molestation and generally creepy behavior toward teenagers. Sen. Al Franken is having to answer for allegedly groping a woman while she was asleep and forcing her to kiss him. Even past presidents are in the crosshairs, with George H.W. Bush's alleged pattern of groping women during photo shoots getting extensive coverage and Bill Clinton's sordid history being dredged up once again.

What's most amazing about all this – particularly for those of us old enough to remember Anita Hill bringing national attention to sexual harassment but Clarence Thomas being confirmed to the Supreme Court anyway – is that at least some men are being held accountable right now. Harvey Weinstein has been effectively ex-communicated from Hollywood, Louis C.K. has lost numerous projects and has said he's going to disappear for a while, Roy Moore is behind in the polls in deep-red Alabama, Al Franken has volunteered to face an ethics probe while some of his colleagues are returning campaign donations from him, and many people are arguing Bill Clinton should have resigned over the Lewinsky affair.

America taking seriously the abuse of sexual power dynamics is a huge deal. But this moment will be incomplete without a thorough re-visiting of our president's history with women.

Of course Trump's past was a part of the presidential election last year – often a big one. But at the time, his accusers and admissions had to share the spotlight with a flood of other wild campaign-related news. And, for a complicated cocktail of reasons we're sure to be sorting out for years to come, the nation simply was not treating such stories with the level of seriousness it is today.

The truth is that many of the stories reported about powerful men over the past several weeks are similar to what women have been saying about Trump for years – and, in some cases, even what he has said about himself.
As The New York Times reported last year, Trump is accused of sexually assaulting a woman on an airplane in the Eighties in a way that recalls Franken's alleged misconduct in 2006:

"About 45 minutes after takeoff, she recalled, Mr. Trump lifted the armrest and began to touch her. According to Ms. Leeds, Mr. Trump grabbed her breasts and tried to put his hand up her skirt. 'He was like an octopus,' she said. 'His hands were everywhere.'"

And like Roy Moore is alleged to have targeted teens, Trump has freely admitted that he would enter the dressing room at Miss Teen USA beauty pageants, with some contestants as young as 14. Several contestants have backed this up, saying they saw Trump in the dressing room looking at them in various states of undress.

Perhaps most famously, Trump has boasted about forcing himself on women, as numerous high-profile men who have faced career consequences of late are said to have done; on the infamous 2005 Access Hollywood tape, Trump bragged that his fame allowed him to grab women "by the pussy."

All told, at least 16 women have accused Trump of harassment, assault or other abusive sexual behavior. (Trump last year denied all those claims, at one point suggesting some of his accusers were too unattractive for him to have assaulted; the White House maintains that all of Trump's accusers lied.)

As a country, we didn't listen to those women last year. But in this current environment, people of all stripes are listening. Even Tucker Carlson, Jeff Sessions and Mitch McConnell are arguing that at least some women can and should be trusted.

Amid this seemingly massive culture shift around sexual harassment, assault and abuse, the brave women who have come forward with allegations against Trump deserve to be trusted as well.