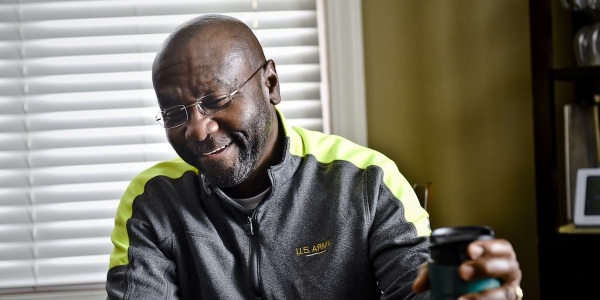 When he arrived in Helena, Montana, in February 1994, Wilmot Collins was wearing layer upon layer of clothing, anticipating the freezing cold temperatures.

What he was a little less prepared for was being the only black man in a majority white community. A Liberian refugee, Collins noticed no one else in this rocky city looked like him.

On Tuesday, Collins, 54, was elected to lead the community heâ€™s called home for over 20 years.

A man who hails from a nation founded by freed slaves from America, Collins beat the four-term incumbent Jim Smith to be elected Helena's first black mayor. African Americans make up less than 1 percent of the population in Helena, according to a U.S. census from 2010.

Collins grew up on the tire company Firestoneâ€™s natural rubber plantation in Liberia, one of the worldâ€™s largest. He attended the University of Liberia and met his future wife, Maddie.

The young couple soon found themselves in danger as a brutal civil war broke out. They fled the country when Liberiaâ€™s ceasefire collapsed in 1990 and after Collinsâ€™ two brothers were killed by rebels and government soldiers.

â€œWhen my wife and I finally fled the country, I was 90 pounds. She was 87. We were dying of starvation,â€ he said in a TEDx talk he gave back in February.

They escaped to Ghana, and the couple set their sights on coming to America. Maddie suggested Helena - she had spent a year there as a high school exchange student with a kind host family which, in turn, expedited her vetting process.

Two weeks before she was set to leave, Maddie found out she was pregnant.

Together, they made the hard decision for Maddie to go to America first.

Left behind in Ghana, Collins continued through the â€œgruelingâ€ vetting process for U.S. entry, with no idea how soon he would be reunited with his pregnant wife or if that would even happen.

â€œI was getting frustrated. Itâ€™s not an easy thing to not be able to see your family. It was really hard,â€ Collins recalled.

Two years and seven months later, Collins finally came to the United States. It was then that he had an â€œemotionalâ€ first meeting with his daughter Jaymie, already two years old.

Collins settled in Helena, later joining the U.S. Navy Reserve and traveled to Fort Carson in Colorado and South Carolina But he always felt that Montana was home.

A child protection specialist with the Montana Department of Health and Human Services at the time of his campaign kickoff, Collins has always been civically involved and giving back to his community.

In 2015, Collins and his wife helped another couple like themselves, Cuban refugees Adonis Antolin and Maie Lee Jones, stay on their feet and convinced them to stay in Helena according to Public Radio International.

â€œHe told us to be patient because here, itâ€™s different. There arenâ€™t that many Latino people or black people. He told me not to feel scared because people here are very nice,â€ Antolin told PRI.

Collins is also a delegate for the advocacy organization Refugee Congress and is an adjunct professor at the University of Montana-Helena.

With his kids grown up and a bit more downtime as he wraps up his dissertation for a Ph.D. in forensic psychology, Collins felt it was an opportunity to run for public office.

Campaigning was an â€œuphill battle,â€ Collins told ABC News. During fundraising events, Collins was told he was wasting his time. The incumbent Smith was known to the community and a popular mayor.

But he didnâ€™t shy away.

His campaign registered in May for the race and in June, Collins and his team began knocking on doors, distributing fliers, and writing letters to constituents, supporters and sponsors.

â€œHad we not gone door to door, I donâ€™t think I would be here today talking to you,â€ Collins said.

And while campaigning, he never felt that his race was a factor.

He recalled one night that he and Maddie, now a registered nurse in the Army Reserve, were canvassing late and it was getting dark.

â€œMy wife was getting scared. She said, â€˜Hey you know if someone feels threatened on their property you know what could happen.â€™ I said, â€˜Iâ€™m aware.â€™â€ Collins said.

The couple continued canvassing and their fears subsided.

â€œBut we knocked on those doors when it was getting dark. And nobody seemed to mind.They opened up their homes, they offered us coffee, they gave us water. Thatâ€™s what encouraged me to continue,â€ Collins said.

Collins added, â€œI knew I lived in a community that was accepting and tolerant.â€

As he, his family and his supporters gathered Tuesday night for their watch party at a local Mexican grill, Collins couldnâ€™t help but be nervous as the first round of vote results came in and he was narrowly leading his opponent by hundred votes.

It would not be until early Wednesday morning that the final results were known. His son, Bliss, a senior at the University of Montana, who had been tracking the results on his phone, was the one to deliver the good news: Collins was going to be Helenaâ€™s next mayor.

Collins believes he won because his progressive message resonated with residents as he chose to focus on solving youth homelessness, providing affordable housing and pushing for more resources for emergency response.

And because, Collins said, â€œI guess the community was looking for a change.â€

But he did not expect such a national response to his election as the first black mayor of Helena. Since his victory, Collins has been interviewed by various national outlets, name-dropped during late night show monologues, and congratulated from different parts of the country.

"You are an inspiration to many of us Liberians. I am more confident than I was yesterday, that with hard work I can push boundaries and live the American dream," a supporter wrote on Collins' campaign page on Facebook.

"Not only is this huge for racial equality in our state but also how we will address the assistance of refugees," another wrote.

â€œIâ€™m happy that I can be of some assistance or can be of influence or can inspire people,â€ Collins told ABC News.

Asked how he feels with all this national attention, Collins said, â€œOverwhelmed.â€