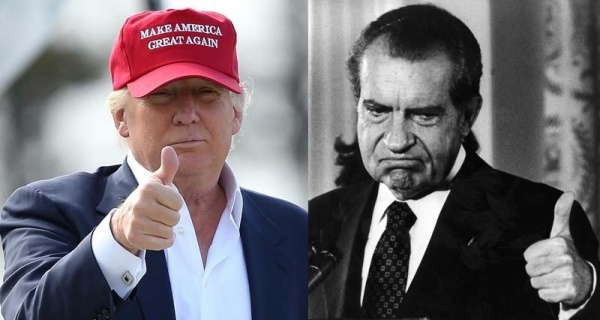 Every president lies, but Donald Trump lies like he’s going for the gold. Since ‘president’ and ‘lie’ are two words we commonly see together these days, we thought it’d be interesting to compile a list of some of the more famous presidential lies through the years (starting with two from our current president that we haven’t covered yet).

1. Donald Trump: “You look at the city with the strongest gun laws in our nation, is Chicago and Chicago is a disaster.”

Chicago doesn’t have the strongest gun laws in our nation. It used to have stricter gun laws years ago, but it’s no longer a relevant talking point. After a Supreme Court ruling in 2010, Chicago residents can now own handguns and carry them unseen on the streets. Additionally, Chicago isn’t particularly harsh with their enforcement of these laws.

2. Donald Trump: “Nobody cares about my tax return except for the reporters.”

During the 2016 presidential election, Donald Trump’s tax returns were a hot topic. Despite being asked to release them countless times, he insisted that the American people didn’t actually care to see them — the liberal media did. Trump was the first presidential candidate to refuse showing his tax returns in decades, and, according to Money, the people do care. “The majority of American voters still want President Donald Trump to release his tax returns,” states the article, citing a Bloomberg/Morning Consult poll.

Honest Abe? Maybe not so much. Often regarded as one of our best presidents, Abraham Lincoln still wasn’t immune to getting caught up in political lies. We all know his greatest achievement was his fight for equality and the abolishment of slavery. To get there, though, he had to tell a few lies.

The same man who said “I believe the declaration that ‘all men are created equal’ is the great fundamental principle upon which our free institutions rest; that negro slavery is violative of that principle,” also said, “Do the people of the South really entertain fears that a Republican administration would, directly or indirectly, interfere with their slaves, or with them, about their slaves? If they do, I wish to assure you, as once a friend, and still, I hope, not an enemy, that there is no cause for such fears.”

In Dwight D. Eisenhower’s presidency, he denied that U-2 spy planes were flying over the Soviet Union when, in fact, they were. In 1960, when the USSR shot down an American plane and captured its pilot, President Eisenhower had to admit that the CIA had been flying spy missions of the USSR for years.

In 1985, Iran offered to free the several hostages they’d taken in exchange for missiles. “We did not, I repeat, did not trade weapons or anything else [to Iran] for hostages, nor will we,” Ronald Reagan told the American people when suspicions started to rise. Though, a few months later, he admitted to doing just that: “A few months ago, I told the American people I did not trade arms for hostages. My heart and my best intentions still tell me that’s true, but the facts and evidence tell me it is not.”

“I did not have sexual relations with that woman,” – Bill Clinton, 1998. The Lewinsky scandal involved one big lie: that there was no sexual relationship between the two parties. But, as I’m sure we all remember, “Clinton was later impeached by the House of Representatives for lying about the matter under oath.”

On June 17, 1972, five men were arrested for breaking into the Democratic National Committee headquarters and wiretapping the phones and stealing important documents. “Watergate set the bar for presidential lies when Nixon insisted he played no role,” states National Geographic. Thanks to the persistent Washington Post coverage on the story, Nixon was eventually found out and resigned from his second term in office.

In 1964, two U.S. ships were attacked in Vietnam’s Gulf of Tonkin. President Lyndon B. Johnson got on the air that night to tell the American people about the “unprovoked” attack and that he was orchestrating an aggressive response. In actuality, Johnson had already planned to attack North Vietnam and had been spying on them. There was no unprovoked attack. “For all I know, our Navy was shooting at whales out there,” said Johnson in 1965.

“I have previously stated, and I repeat now, that the United States plans no military intervention in Cuba,” – John F. Kennedy. The Bay of Pigs goes down as one of the most brutal presidential mistakes in history. Kennedy did intend to invade Cuba, and Fidel Castro found out. Not only did the incident cost many lives, but it also strengthened Castro and emboldened the Soviets to build bases in Cuba.

Former President William McKinley told another war-causing lie. He told Congress that Spain blew up the U.S.S. Maine in Cuba, which started the Spanish-American War of 1898. However, thanks to an investigation in 1976, it was discovered that Spain, in fact, did not blow up the U.S.S. Maine. A fire on the ship reached the boat’s ammunition stock and caused an explosion.

James K. Polk was the 11th president of the United States, and he set his sights on expanding America’s territories. Specifically, he had his eye on California and New Mexico — Mexican territories at the time. When Mexico wouldn’t agree to sell him the territories, Polk sent troops “into Texas to cross the Nueces and guard the Rio Grande.” Mexico, of course, fired at the troops in response. Polk went to Congress and told them Mexico had “invaded our territory and shed the blood of our fellow-citizens on our own soil.” So began the Mexican-American War.

When George H.W. Bush was in office, he was especially adamant about one thing: “Read my lips. No new taxes.” As you might have guessed, there were, indeed, new taxes. “ As presidents sometimes must, Bush raised taxes,” says Time. “His words were used against him by then-Arkansas Governor Bill Clinton in a devastating attack ad during the 1992 presidential campaign.”

When Franklin D. Roosevelt was battling for his third term in 1940, he told the American people: “Your boys are not going to be sent into any foreign wars.” Of course, they eventually were.

“Franklin Roosevelt repeatedly deceived the American people during the period before Pearl Harbor … He was like the physician who must tell the patient lies for the patient’s own good … The country was overwhelmingly non interventionist to the very day of Pearl Harbor, and an overt attempt to lead the people into war would have resulted in certain failure and an almost certain ousting of Roosevelt in 1940, with a complete defeat of his ultimate aims,” said former congresswoman Clare Booth about Roosevelt’s time in office.

“Intelligence gathered by this and other governments leaves no doubt that the Iraq regime continues to possess and conceal some of the most lethal weapons ever devised.” – President George W. Bush. Though, to this day, we’re still not entirely sure of the blatancy of this particular lie, there’s no denying that it was not a full truth.

“Certainly, a strong argument can be made that he exaggerated the danger posed by banned Iraqi weapons when he was trying to convince the country and Congress of the need for a pre-emptive strike,” reads the New York Times.

Nope, not George Washington. We had another president in more recent history who swore to never tell a lie. In fact, “I will never tell a lie to the American people” was a part of President Jimmy Carter’s campaign prior to getting elected. “He won the Nobel Peace Prize after leaving office, and he’s been widely praised for his humanitarian efforts around the globe,” says CNN writer John Blake. “He still builds homes for the poor around the world.” A true modern day George Washington.

But not everyone respected Carter’s good nature.

“The country fell apart,” says professor of political theory at Marlboro College in Vermont, Meg Mott. “He was too noble, too pure. He didn’t know how to play people against one another. He should have read his Machiavelli.”