Woman Ends Date After Finding Out Man Voted For Trump 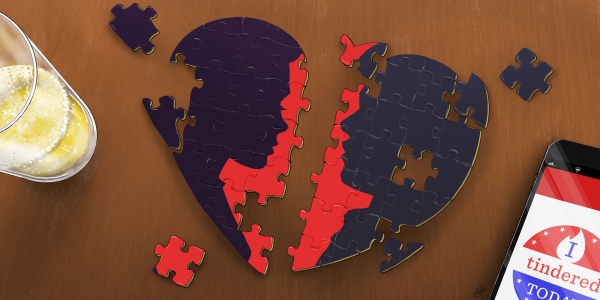 The first date was going great. Until politics came up.

It was a summer evening at Nineteen, and for two hours, Bryan Leib and the woman he met on a dating app had been enjoying drinks and a bird’s-eye view of the Philadelphia skyline.

Then she asked for whom he had voted in the presidential election. Leib, the treasurer of the Philadelphia Young Republicans, answered honestly: Donald Trump.

“She stopped in her tracks and said, ‘You know what, Bryan? This has been a lot of fun, but I think we’re two completely different people,’” Leib, 32, of Center City, recalled. “And she literally got up and left.”

Since Trump’s election a year ago Tuesday capped a divisive presidential campaign, changes have come to health care, environmental and immigration policy, tax plans, and our education system. But sex, too?

Dating in the time of Trump seems to have changed the way couples court, debate and tolerate. What once was a bullet point in a list of get-to-know-you questions may now be an asterisk. What’s more important to know: Do you have herpes, or did you vote for Hillary? And if you’re tolerant enough to enter a relationship with someone of another party, how many Muslim bans can one couple withstand?

Steve Ward, a Philly native and the 36-year-old CEO of the national matchmaking firm Master Matchmakers, said dating has become “much more polarizing” since the 2016 presidential election. He said these days, it’s more often that politics takes precedence over traditional dating criteria like physical chemistry, religion, and geography.

“There was always a rule that you shouldn’t talk about politics on a first date, but now it’s almost impossible for people not to express themselves and not know what the other person believes,” Ward said. “People on opposite sides at this point have lost the civility of being able to agree to disagree.”

There are some data to support this, according to Melissa Hobley, the chief marketing officer of OKCupid. She said the app prompts every user to respond to the question: “Do you enjoy discussing politics?” In the last year, OKCupid saw a more than 50 percent increase in those who marked the question as important to them.

“We’re finding that politics are becoming a bigger deal-breaker today,” Hobley said, “maybe the most they’ve been in many years, and certainly since the inception of dating apps.”

OkCupid allows singles to review each other’s answers to questions about everything from personality type to preferences in the bedroom. In February, after OKCupid noticed an uptick in interest related to politics, the company added 14 political questions, among them: “Do you believe we should ‘build a wall?’” and “Do you think the left wing is guilty of perpetrating ‘Fake News’?”

Hobley said that of the new questions, the one “that holds the most weight in terms of importance” for users asks simply: “Trump?” Of OKCupid’s estimated 2.5 million monthly users, more than a million answered the question, with 65 percent responding either “no” or “hell no.” (Trump won about 46 percent of the popular vote.)

Match.com‘s “Singles in America” survey released in February found that about 80 percent of its 5,500 respondents who discovered on a third date that a suitor had a political affiliation different from their own wouldn’t be bothered at all or only “a little.”

Leib, for instance, is open to dating Clinton voters. In fact, a bigger turnoff for him is someone who didn’t vote at all.

Posing the question on Twitter got results more in line with OKCupid: A person’s presidential vote could be a deal-breaker.

That’s how it is for Kate Flaherty of Northern Liberties, a registered independent who voted for Hillary Clinton and said Trump is “blatantly racist” and a “misogynist.” She indicates in her dating profile that something she “thinks about a lot” is “how the hell we’ll survive Trump,” a move to deter Trump’s staunchest supporters from pursuing her. But she wishes she didn’t have to.

“I don’t like that who somebody voted for is a sign of their morality rather than just their politics,” she said. “But I think you can’t deny that’s how it is now. And I can’t look past that.”

Annie White, a Philadelphia-based dating coach and founder of Sick of Single Dating Service, said she was floored this year when a client told her dating a Trump supporter would be “a non-starter.” Since then, she said, she’s noticed an increasing number of clients indicating political affiliation is more important now than ever.

Still, White, 30, encourages the women she coaches to work to find common ground. Even better, wait until you know each other better — perhaps the third date — to talk politics. “You don’t want to give someone a superficial data point so they paint this picture about you and eliminate you off a technicality,” she said.

Ward, the matchmaker, said singles who use the 2016 election as a litmus test for values should identify specific “boiling points” — abortion, gay rights, climate change or immigration — rather than a specific candidate.

“The best approach for any sensitive subject is to approach with caution,” he said. “Learn rather than teach.”