WATCH: Woman Is Deported After Living In The U.S For 30 Years 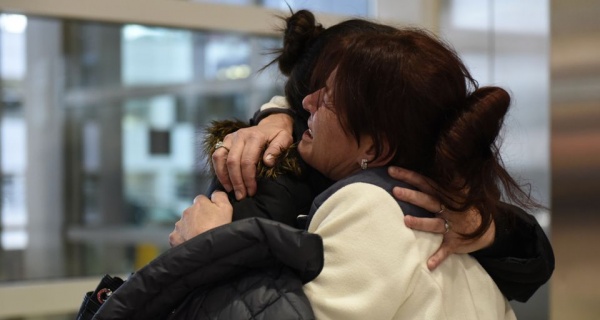 After 30 years in the U.S., where she raised three children, worked and paid taxes in Sterling Heights, Zahrija Purovic, 50, was put on a plane and sent to Montenegro on Thursday.

Despite no criminal record and a pending motion for a stay of removal in federal appeals court, immigration authorities ordered her to pack her belongings, purchase a plane ticket and appear at Detroit Metro Airport.

Upon arriving with family members and friends around 4 p.m. Thursday, two ICE agents told Purovic that she had not been granted a stay, and escorted her to her flight.

During an emotional goodbye, a friend of 16 years collapsed to the floor while hugging Purovic. After regaining consciousness, the woman asked the ICE agents if they could say one last goodbye.

"No," the agent said, and escorted Purovic to her gate.

Her lawyer called the deportation nonsensical, and said Purovic has few ties to her native country, having never gone back since moving to the U.S. at age 19.

An Immigration and Customs Enforcement spokesperson declined to discuss her case.

"This is a good example of the nonsensical deportations that we are seeing," said Purovic's attorney, Carrie Pastor. "She has no criminal record... she was denied asylum many years ago, but we have no idea why since the court records have been damaged.

"Her case is currently pending before the U.S. Court of Appeals for the Sixth Circuit. No decision has been made... She is being sent to a country she has not seen for 30 years... ICE refuses to wait for the (court) to make a decision on her case or for her to attend her specialist appointment to discuss surgery."

Purovic suffers from scoliosis and was scheduled to see a Michigan surgeon Nov. 13, after physical therapy and other treatments failed.

She fears she won't have access to effective treatment in Montenegro.

"Nobody (cares) for the old people (in Montenegro)," Zahrija said.

The court records in Purovic's case are hidden from public view, but the docket shows no decision had been made on a motion to delay her removal as of Thursday evening.

The family says her status with immigration authorities went south in 2001, when she and her then-husband gave conflicting information to an immigration judge.

"(My) dad said he was married to my mom already before she came to this country," said her son Arian Purovic, 27.

But Zahrija Purovic told a judge the two met through photos and phone calls after she moved to the U.S.

A few months ago, Zahrija Purovic had what the family thought was a promising interview with Immigration and Customs Enforcement, in which she was approved for a work visa. But her prospects were dimmed in a second interview.

"They basically told her she has to get a ticket and has to leave by this date," Arian Purovic said. "When she gets the ticket to go back home, she has to prove that she bought the ticket...

"Her leaving, I don't even like to think about it. It stresses me out," Arian said before his mother's departure.

ICE agents at the airport said she would be banned from re-entering to the U.S. for 10 years, but that the family could apply for a waiver that would allow her to return. The long-shot application process could take a year or longer, according to the American Immigration Council.

Purovic's family has struggled to cope with her impending removal.

Her youngest son Elvir Purovic, 23, said he had been holding onto "that last grip of hope" that a court decision would allow her to remain in the country.