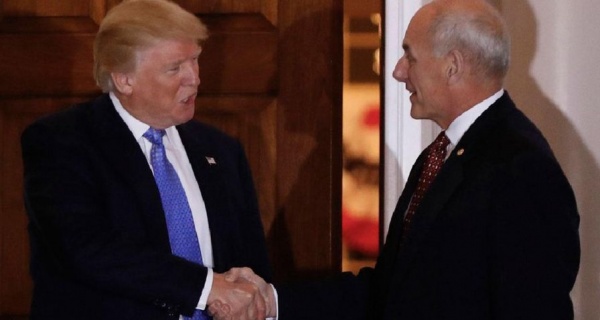 But Kelly’s most peculiar remarks went largely unnoticed. U.S. soldiers, Kelly said, volunteer even though “there’s nothing in our country anymore that seems to suggest that selfless service to the nation is not only appropriate, but required.” This was, Kelly lamented, because nothing in America is “sacred” anymore, like women or religion. We’ve also, according to Kelly, discarded the “sanctity of life” (i.e., abortion is legal).

In other words, Kelly may love whatever version of America’s past that he has in his mind. But he is not particularly fond of this actual country, today, or Americans themselves (unless they’ve been in the military).

Kelly went on to express similar feelings in his recent Fox News interview when discussing Trump’s call to Myeshia Johnson, which Florida Democrat Rep. Frederica Wilson criticized for upsetting Johnson. (Trump told Johnson that her late husband “knew what he was getting into,” and Johnson believed Trump had trouble recalling La David’s name.) Wilson’s statements, Kelly said, made him wonder if “doing anything” for the United States “is worth it anymore.”

Kelly has clearly felt this way for quite some time. In a 2007 speech, he claimed that America has “lost something of quality over the years. … Today, unfortunately, to most it’s about quick gratification, and what’s in it for me. Memorial and Veteran’s Day are more about a day off to take advantage of the big sales at the malls.” Indeed, he said, it’s almost inexplicable why anyone would join the military, given how awful the U.S. is, including the “great pressure from our society to sit it out and not get involved.”

By contrast, the military is an ideal institution that has never lost a war, although it has been stabbed in the back by the terrible people back in America: “When we have lost,” according to Kelly, “we lost at home, and others declared defeat — not us.”

Of course, it’s completely legitimate to criticize the U.S., and it would be truly worthwhile to sit down with Kelly and explore why he feels this way. But an honest discussion wouldn’t go the way he anticipates.

First, Kelly’s perspective is noticeably Marxist. As “The Communist Manifesto” famously claims, under capitalism, “all fixed, fast-frozen relations, with their train of ancient and venerable prejudices and opinions, are swept away. … All that is solid melts into air, all that is holy is profaned.” But it’s unlikely Kelly wants to face the reality that much of his anger should be directed at America’s economic system.

Kelly also might be surprised that women did not experience being able to vote, or having credit cards in their own name, or the legal protection from being fired for being pregnant, as being “sacred.” He could also usefully ponder, particularly since he’s from Boston, whether the previous sanctity of the Catholic Church had something to do with priests sexually abusing children for decades with impunity.

And an examination of the most valid part of his bill of indictment – the unconscionable burden our wars place on a small slice of the U.S. population – would be particularly uncomfortable for Kelly. He believes that we are locked in a death match with countless, merciless savages and resents the fact that most young people don’t agree enough to enlist. From a certain angle, this is understandable, especially given the fact that one of his sons was killed in Afghanistan and another is still in the Marines.

But then Kelly should immediately have a talk with both Trump and George W. Bush, who not only haven’t persuaded most Americans of these stakes, but can’t even persuade their own children — every single one of whom has instead chosen the kind of civilian, sybaritic, careless life Kelly finds so distasteful. Kelly might also consider that the Pentagon does not want lots of additional volunteers and loathes the idea of the draft, because the fewer Americans involved in our wars, the freer political hand the generals have to prosecute them.

It may seem like a weird contradiction for Kelly to speak constantly about his devotion to his country, while finding his fellow citizens so detestable. But if you pay attention, you’ll see this kind of worldview is common among the loudest patriots everywhere on earth.

NO ONE, OF course, was a bigger patriot than Richard Nixon. He vaulted into power by rooting out various communist traitors, even if they weren’t communists or traitors. In the midst of Watergate, he went on national television to tell everyone that there would “be no whitewash at the White House … because I love America.”

Meanwhile, in private taped conversations with aides, Nixon would expound on how repellent huge swaths of Americans are. It turns out that Mexican Americans “steal, they’re dishonest.” However, there was some hope for them, because “they do have some concept of family life. They don’t live like a bunch of dogs, which the Negroes do live like.”

Another of Nixon’s insights was that “the Jews are born spies.” He asked his chief of staff, “What the Christ is the matter with the Jews, Bob? … I suppose it is because most of them are psychiatrists.” Irish-Americans weren’t quite as bad, but “virtually every Irish I’ve known gets mean when he drinks.” Italians “don’t have their heads screwed on tight.” Nixon also felt strongly about “fags” and “fairies,” who, together with drugs, are “the enemies of strong societies.”

Israeli leaders have felt similar disgust about Israelis, and sometimes Jews more generally. In 2002 Sara Netanyahu, the wife of current Israeli Prime Minister Benjamin Netanyahu, was taped telling a friend that Bibi was the “one person who can save this country” and in fact he was “greater than this entire country.” If Israelis didn’t elect him, she said, “We’ll move abroad. This country can burn. … People here will be slaughtered.”

Then there’s a famous 1982 interview by Amos Oz with “C.”, an anonymous top officer in the Israeli military. C. emphasized that “I don’t hate Arabs,” but did in fact despise “Yids,” both in Israel and elsewhere. The “sweetest fruit” of Israel’s recent invasion of Lebanon, said C., was that now the world purportedly “also hate[d] all those Feinschmecker Jews in Paris, London, New York, Frankfurt, and Montreal, in all their holes. At last they hate all these nice Yids.” He then fantasized about Jewish cemeteries being desecrated, synagogues being burned down, and Jewish children being shot, so the Jewish diaspora would be forced to move to Israel en masse.

But if “C.” didn’t hate Arabs, Arab leaders certainly have. Ahmed Chalabi, whom U.S. neoconservatives hoped to install as Iraq’s leader after the U.S. invasion, was from a wealthy Arab family. When Chalabi became angry at one of his CIA handlers, he delivered a stinging insult: The CIA operative, he said, “was thinking like an Arab.”

This perspective was shared by Chalabi’s minions in his organization, the Iraqi National Congress. After Saddam Hussein was deposed, Mideast expert Glen Rangwala visited Chalabi’s new headquarters – at Uday Hussein’s favorite hunting club in Baghdad. It was “bizarre,” Rangwala reports, with “waiters bringing you free cocktails under elaborate chandeliers, whilst an INC goon tells you about how stupid Arabs are.”

Next door, in Iran, regular people are also appalling. Mohsen Makhmalbaf, a famed Iranian filmmaker and dissident, wrote a series of articles in 2009 about Iran’s Supreme Leader Ali Khamenei. Khamenei’s wife, according to Makhmalbaf, believes “the Iranian people are fawning liars and traitors” who grovel before him even as they plot against the government.

Then, of course, there are the dreadful Palestinians, whom Yasser Arafat called an “ungrateful people.”

The psychology behind this pattern among the greatest self-professed patriots is transparent. They see themselves as their country’s rightful rulers, and hence the rightful role of the rest of us is simply to follow orders and intermittently erupt in applause. Any resistance to their whims is therefore maddening and a clear sign of moral decay among the peasantry.

So it makes perfect sense that John Kelly has risen to the top of the Trump administration. On this issue he and the president are soulmates. No one is louder than Trump about loving America, even as his only goal seems to be to insult every American individually, one by one, via Twitter. Why? Because, like Kelly, he hates us. You don’t need to take my word for it; Trump himself has said it clearly: “For the most part, you can’t respect people because most people aren’t worthy of respect.”