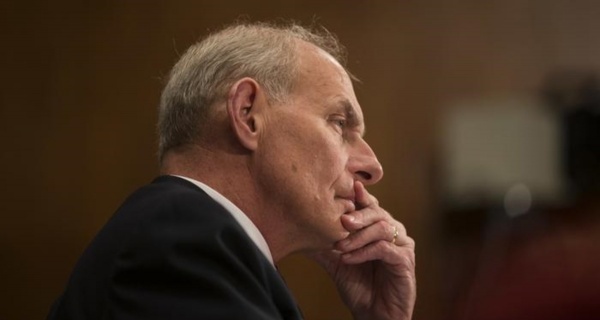 Chief of Staff John Kelly just twisted history by stating, “Robert E. Lee was an honorable man who gave up his country to fight for his state.”

White House Chief of Staff John Kelly just honored a slave-owning Confederate general — and used falsified history to do so.

In fact, he said, “the lack of an ability to compromise led to Civil War” effectively blaming both sides — the pro-slavery Confederacy and the Union opposing it— for the conflict that killed 600,000 Americans.

So much for being the only adult in the room.

Speaking to Fox News’ Laura Ingraham, Kelly discussed the controversy surrounding the removal of plagues that honored Confederate Generals, including Robert E. Lee. The plagues were hung inside a church in 1870 and are going to be taken down after the Aug. 12 protest in Charlottesville, Virginia, where an alleged white supremacist killed a young anti-racism activist.

The chief of staff argued why the mementos shouldn’t be removed and, in doing so, defended the confederacy’s stance on slavery.

“[Confederate General] Robert E. Lee was an honorable man who gave up his country to fight for his state,” Kelly said. “One hundred and fifty years ago, that was more important than country — it was always loyalty to state back in those days. Now it's different. But the lack of an ability to compromise led to the Civil War, and men and women of good faith on both sides made their stand where their conscience had them make their stand.”

The chief of staff’s words echoes those of President Donald Trump, who claimed “both sides” were to blame for the violence that ended in tragedy at the white supremacist rally in Charlottesville.

Neo-Nazis have used Lee as a symbol of their movement even as government officials called for Confederate statues and monuments to be removed from public grounds. However, Kelly called the move “dangerous” because it apparently shows “a lack of appreciation of history and what history is.”

Yet, the fact remains that the Civil War was mostly a result of disagreement over slavery. By claiming the war was an issue of rights of states, Kelly undermined the role of slavery, which is central to the conflict — despite the fact while declaring their right to secede from the Union, the Confederacy cited the continuity of massive-scale slave labor as their key goal.

Kelly has also not shed light on what sort of compromises he believes were lacking in the lead-up to the American Civil War. In light of the above facts, it’s hard to think they would have benefited the future of African Americans.

As any sane person would guess, the Twitter immediately started blasting Kelly’s twist on history.

In addition to his praise for Robert E. Lee, Kelly has not apologized for viciously attacking Congresswoman Frederica Williams for listening in to Trump’s condescending condolence call to an Army Sgt. La David Johnson’s widow.

When questioned about this fact, Kelly said he would “never” do so.

“Well, I’ll apologize if I need to. But for something like that, absolutely not,” he said. “I stand by my comments.”