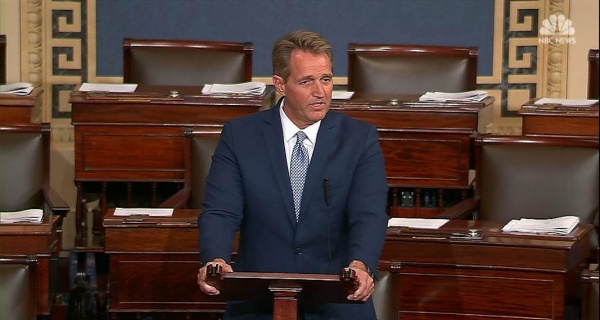 Date Posted: Tuesday, October 24th, 2017
Republican Senator Jeff Flake of Arizona announced he won’t seek re-election and then delivered a blistering attack on Donald Trump on the Senate floor, the second GOP senator to publicly excoriate the president on the day the party wanted to put a proposed tax overhaul at the forefront.
“We must stop pretending that the degradation of politics and the conduct of some in our executive branch are normal,” Flake said Tuesday, without mentioning Trump’s name. “They are not normal.”
“Outrageous and undignified behavior has been excused as telling it like it is when it is actually reckless, outrageous, and undignified,” Flake said. “When such behavior emanates from the top of our government, it is something else. It is dangerous to democracy.”
Flake’s decision to not seek a second term in 2018 may help Democrats claim his seat, putting the thin Republican Senate majority in jeopardy.
Flake has previously criticized Trump, though his comments Tuesday were harsher than in the past. The president once called the senator “toxic” in a post on Twitter.
“Based on the lack of support he has from the people of Arizona, it’s probably a good move,” White House Press Secretary Sarah Huckabee Sanders said of Flake’s decision not to seek re-election. She called Flake’s and Corker’s criticisms of Trump “petty comments.”
Flake was facing a primary challenge from Kelli Ward, a former state senator who lost the GOP Senate primary last year to Senator John McCain, who also has been critical of Trump. Trump’s former chief strategist, Steve Bannon, is backing Ward in what he says is a quest to oust the party establishment.
Breitbart News, the website Bannon again runs, issued a tweet that repeated the word "WINNING" 14-and-a-half times with a link to a story about Flake’s decision. Bannon declined to comment.
The Democrats’ top candidate for Flake’s seat is Representative Kyrsten Sinema, considered a moderate in a state that leans Republican.
A cordial conservative with a maverick bent, Flake angered Trump’s base by refusing to endorse Trump in 2016. Flake also criticized the president’s order banning people arriving from seven heavily Muslim nations. In Flake’s book “Conscience of a Conservative,” released this year, the senator said it’s time for Republicans to reclaim conservatism from Trump.
Flake’s popularity in Arizona has sunk. A Morning Consult poll in July found just 37 percent of voters in his home state approving of the job he’s doing.