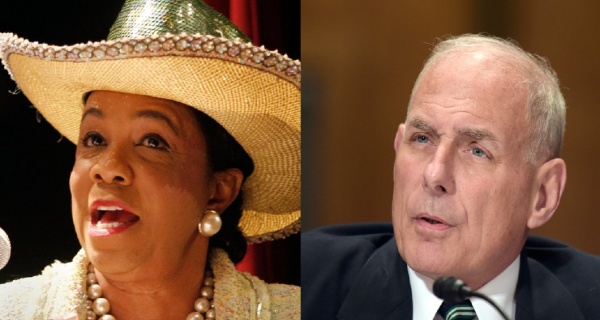 Trevor Noah may have no idea what it means to call someone an "empty barrel," but he's sure of one thing: White House Chief of Staff John Kelly needs to apologize to Rep. Frederica Wilson (D-Fla.) after he "successfully maligned" the congresswoman last week.

When Kelly replaced Reince Priebus over the summer, it was an appointment widely praised, with pundits calling him "a force for good." This sounded extreme — "It's not the Death Star, everyone in there is supposed to be a force for good," Noah said on Monday's Daily Show — but the retired four-star general was well-respected and seemed likely to be able to control President Trump. That's why it came as a surprise when he "put his credibility on the line" last week and defended Trump after Wilson said she heard Trump's "insensitive" remarks to Myeshia Johnson, the widow of Sgt. La David Johnson, who was killed earlier this month in Niger.

"He didn't just step into the fight, he started throwing punches," Noah said. Kelly ridiculed Wilson for listening to Trump's phone call, even though he also heard the conversation since he was next to Trump, and then attacked Wilson's character, calling her an "empty barrel." "Where I come from, you don't call someone an empty barrel, because no one knows what that means," Noah joked. Kelly also claimed Wilson bragged about securing funding for an FBI building in Florida, but the video later released by a local newspaper showed she spent her time saluting law enforcement. People believed him, though, because "John Kelly would never say anything that wasn't true — or so we thought," Noah said. Now, it's time for him to make things right with Wilson, a former educator and founder of the 5,000 Role Models of Excellence Project. "She's not an empty barrel," Noah said. "She's someone who deserves an apology."