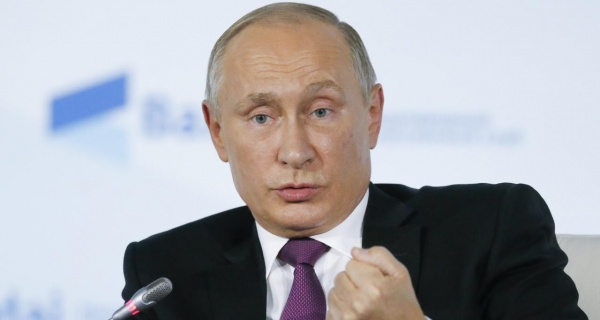 Russian President Vladimir Putin has called on U.S. citizens to stop disrespecting President Donald Trump, a trend that the Russian leader called a symptom of a poor political system in the U.S.

Putin, who U.S. officials have accused of swaying the 2016 U.S. presidential race in Trump's favor, broke a streak of hostile diplomatic exchanges between the two leading powers during a speech Thursday in order to defend his former political ally from what he considers unfair criticism at home. Speaking at the Valdai Discussion Club in Sochi, Putin again denied any claims of Russian interference in last year's U.S. elections, asserting that Trump "won honestly" and that he and his supporters have behaved legitimately in response to the current U.S. political climate.

"Inside the country, disrespect is shown for him. This is a regrettable negative component of the U.S. political system," Putin said, according to the state-run Tass Russian News Agency.

"One can argue but one can’t show disrespect, even not for him personally but for those people who voted for him," he added.

Putin also defended Trump's nontraditional, sometimes controversial approach to leading the country, calling the Republican's unpredictable decisions a "reasonable response" to "great domestic resistance" that prevents Trump from delivering on electoral promises. Trump has made similar arguments, mostly blaming the media for what he considers to be an overtly negative portrayal of his administration.

Putin said he believes "the president of the United States does not need any advice because one has to possess certain talent and go through this trial to be elected, even without having the experience of such big administrative work."

On the campaign trail and following his election last year, Trump frequently expressed his desire to mend the political relationship between the U.S. and Russia, which had been severely damaged during the administration of President Barack Obama. Trump touted a number of views that aligned him with the Kremlin, including dismissing the Western military alliance NATO as "obsolete" and building a joint U.S.-Russia effort to battle the Islamic State militant group (ISIS) and other jihadi groups in Syria.

When Trump came to office in January, however, mounting suspicions among U.S. lawmakers and officials that Trump's campaign colluded with Russia to discredit and defeat Democratic presidential candidate Hillary Clinton forced him to largely disassociate himself from Putin. While no evidence has been produced publicly to corroborate this theory, Trump's administration has been plagued by a series of high-level dismissals ever since.

Trump's popularity has widely suffered as a result, making him the least popular president since at least the 1940s, and possibly ever. Another poll in August showed that, when asked the best solution to dealing with the president, most respondents chose impeachment.

Putin's remarks toward Trump came after the Russian leader criticized the U.S. for creating a "dangerous" situation by picking a fight with nuclear-armed North Korea, and accused Washington of seeking to perpetuate "chaos" in the Middle East. Putin, who Trump long alluded to as a possible friend, also disclosed that he believed Russia's biggest mistake in the past 15 years was trusting the West too much.

When asked whether he believed Hillary Clinton would have made a better ally, he responded: "We don’t know what it would have been like."