Alarming Video Of Trump Has Resurfaced 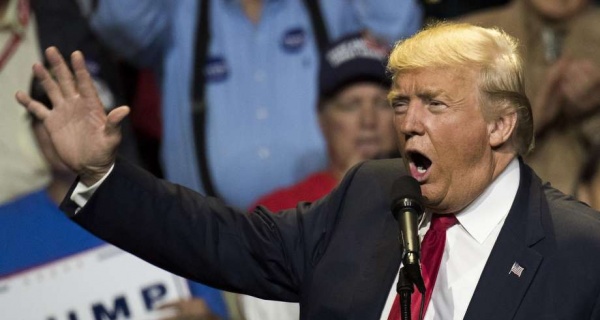 Donald Trump may hold the title of Commander-in-Chief, but it would be much more appropriate to call him the Pervert-in-Chief. From bragging that he likes to grab beautiful women by the genitals to the sickening remarks he’s made about his own daughter, Ivanka, Trump never fails to raise the stakes when it comes to being a dirty old man.s

The latest proof of Trump’s lechery arrives in the form of a video which has recently resurfaced after a decade.

In 2007, Trump gave a speech to the San Francisco Learning Annex for which he was reportedly paid a cool $1.5 million. And in the speech, Trump reverted to his typically disgusting self and began telling the story of a young teenage girl–a beautiful girl, 17 or 18, so beautiful”– he hired to be a waitress at one of his restaurants despite the fact that she had zero experience.

In the video below, Trump invites the young girl, named Juliet, to join him onstage, and then remarks:

“My people said, ‘Mr. Trump, she has no experience,’ so I interviewed her anyway because she was so beautiful.

Then Trump smiles like the proverbial Cheshire cat and says:

“Isn’t that terrible? You can work on my plane anytime.”

“Now if she worked on my plane that’s like a death wish for me.”

The video, which was first discovered by The New York Daily News in 2016, is now even more relevant, as a former contestant on The Apprentice, Summer Zervos, has subpoenaed all records from the Trump campaign involving accusations of sexual harassment and assault complaints made by numerous women. Zervos alleges that in 2007 Trump kissed and groped her when she asked for a job at the Trump Organization.

So while the news is filled with allegations of sexual assault by movie executive Harvey Weinstein, let’s not forget that a sexual predator named Donald J. Trump has also abused women for decades and even managed to get elected to the highest office in the land. When will justice be meted out for his actions?

Watch the video for yourself: