The Assault On Obamacare Continues 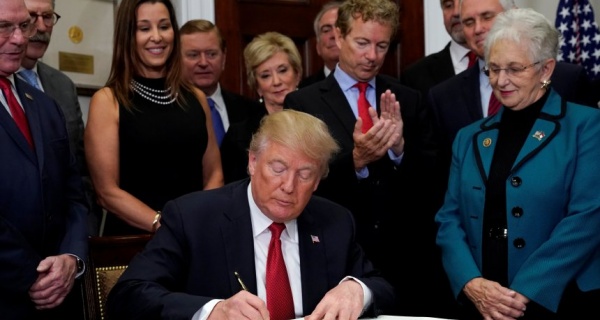 Donald Trump has created a rare hat trick of bad public policy. His latest move to kneecap Obamacare will raise premiums, throw at least a million people off the insurance rolls and cost the federal government nearly $200 billion. It is an act of spite and malice, perpetrated by a president more obsessed with tearing down his hated predecessor's accomplishments than creating his own.

Late Thursday, President Trump declared he would end billions in subsidies for the health care of Americans with modest incomes. The White House described this, falsely, as ending a "bailout of insurance companies."

The policy at issue here is complex – and worth briefly unpacking:

Obamacare reduces the costs of health care in two ways.

In the first – and best understood – the government pays part of the monthly cost of insurance for millions of Americans who buy their policies through Healthcare.gov. This directly reduces the cost of an insurance policy.

But for many Americans, the other costs of health care – the deductibles that must be paid by a patient before insurance kicks in, as well as the yearly out-of-pocket maximums allowed by policies – would make health insurance too expensive to use.

For these Americans, Obamacare offers a second subsidy, but payment is indirect. Instead of giving patients cash to pay for high out-of-pocket costs, the law requires insurers to cap costs for these lower-income customers. It then pays insurers back for the expense of doing so. Here's a real-world example: For an American earning twice the poverty level last year, Obamacare lowered the out-of-pocket maximum allowed in an insurance policy from $6,850 to just $2,250.

The Trump order will not end the requirement that insurers cap costs. It will just stop the federal government from paying insurers back. This is not ending a "bailout" – it’s bouncing a check.

The Trump administration is declaring that it is legally required to stiff insurers – that it is "unlawful" for the administration to make the payments. This is not a settled point of law. A district judge did rule last May that Congress ought to appropriate the cash for insurer payments before the administration reimburses them. But that ruling was stayed, pending an ongoing appeal.

In short, there was no reason to make this move now – except for Trump being obsessed with dismantling Obama's legacy, and piqued that Republicans in Congress failed to ram through a repeal of Obamacare.

The public policy outcome of Trump's decision is a lose-lose-lose. Ending payments will drive insurers from the market, spike premium costs and increase the deficit, according to an August analysis by the Congressional Budget Office.

To recoup the money they're being stiffed by Trump, insurers are projected to raise premiums by 20 percent in the first year. Ironically, this will drive up costs for taxpayers: The government will still be on the hook for subsidizing the now-more-expensive policies of millions of Americans. And the spike in premium costs will make many more Americans eligible for subsidies.

In the first decade, Trump's order is projected to increase federal expenses by $194 billion. This is roughly the cost of NASA's budget over the same ten-year period.

Trump's action is an intentional act of sabotage. It is an effort to destabilize Obamacare's marketplaces and to make Trump's false claims that the program is collapsing a self-fulfilling prophecy. The hope seems to be that by driving up the cost of Obamacare, and kicking one million from the rolls, the program will become less popular – and more vulnerable to full repeal.

In fact, Trump's action could revive bipartisan efforts to fix what ails the Affordable Care Act. Congress can undo Trump's reckless act by just appropriating the subsidy payments called for under the law. That was a tough sell when the impetus was "fixing Obamacare." But Trump has now given Republicans cover any deficit hawk could love: Acting today will prevent nearly $200 billion in new red ink by 2026.

What this episode underscores is Trump's fundamental unfitness for high office. He is willing to disrupt businesses, hurt millions of Americans and cost the federal government hundreds of billions of dollars not to achieve any policy purpose – simply out of a malicious drive to avenge the legacy of the first black man to hold the Oval Office.