The Consequences Of Trump's Climate Change Policy Will Be Disastrous 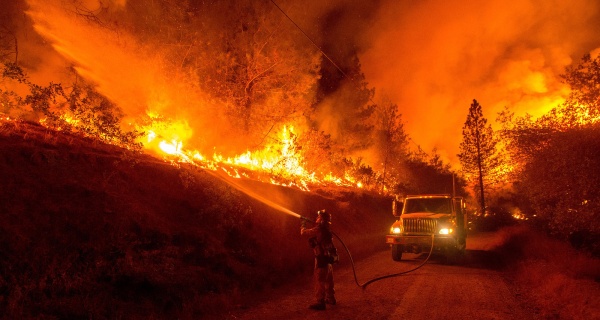 Over the weekend, EPA director Scott Pruitt announced that he would be sending a proposal to Donald Trump to rescind Obama-era regulations on the coal industry. This is another long list of things that the Trump administration wants to end in protecting the environment, and part of his plan to leave the Paris Agreement earlier this year. Many believe that these regulations hurt the American economy, but the effects on the rest of the country are far more costly.

Here are all the ways Trump’s environmental policy will hurt the country and our economy, counting down to the very worst of them all (more on that soon).

Our water resources are dependent on our rain and snowfall each year. Snowpack is especially important, because it extends our supply of fresh water into the summer months. However, as our climate begins to rise, the atmosphere is holding more and more water (about 4% for every degree Fahrenheit it rises). When that happens we have some areas that can become very susceptible to drought. Which is probably why we have been having more and more forest fires in recent years. For every summer we have record high heat, our reservoirs will continue to fall and impact our water supply.

7. Sea-levels are rising at a dangerously fast rate

Everyone is very aware that one of the most recognizable costs of climate change is that the level of the ocean is rising. When the ocean rises very rapidly, even the smallest change can have devastating effects. We’ll see the loss of habitats for plants, animals, and fish, especially in wetland areas. Sea-level rise can also cause destructive erosion to our coastlines. The effects can be seen more inland as well, with aquifer and soil contamination for farmers.

As the infrastructure that we have built begins to break down, the pollution in our waters will rise. When the pollution begins to rise, we see adverse effects to our aquatic resources, like fish. Areas of the fishing industry are already suffering due to a lack of supply, and the inability to maintain sustainable fishing practices. If we add in an excess in pollution that kills those fish, those industries will be strained to their limit. Environments like the Great Barrier Reef are already at risk as it is, and largely represent the “canary in a coal mine,” so to speak.

5. Agriculture (aka our food supply, which you could say is kind of important)

With our rain and snowfall so out of wack, the agriculture industry will suffer the most. Already, across the country, we are seeing a drastic increase in droughts effecting farmers in virtually every climate. Those droughts are only expected to get worse in some areas. This is a stark reality when we as civilians go to the grocery store, and see that our favorite vegetable, fruit, or livestock has increased in price. Bottom line, ignoring the effects of climate change will eventually make it will become harder to put food on the table.

This has been one of the worst summers for forest fires in American history. The entire Northwest, it seemed, was on fire at one point, and now we have wine country in California at risk with its own recent wildfires causing many areas to evacuate. When the climate changes, so does the ability for the forest, ground, and dead wood to maintain enough moisture to prevent ignition, and thus prevent wildfires. The cost to the American taxpayer will surely be higher than ever as we invest resources in putting these fires out.

3. Soon, the air we breathe could very well be harmful

Air quality is kind of a no-brainer when it comes to the livelihood of the American worker. If we take Beijing, for example, their smog is so bad at points, it can literally block out the sun. Kids play in inflatable bubbles so they can stave off the effects of the smog. Imagine going through your day in the constant twilight of dusk. The mental cost alone should be enough to concern you if it weren’t also for the long-term health effects.

2. Get ready for medical costs to rise

As we mentioned before, the air quality in some areas will get so bad, you won’t be able to breathe. Having low air quality can lead to a limitless list of health problems for every American. Asthma is an obvious concern as the change in the beginning and end of seasons can severely affect how bad it is. Allergens like pollen will bloom before or later in a season causing severe allergies. There is also a severe risk to our cardiovascular system as well. The sheer cost to our healthcare system will be staggering, and every American may end up footing the bill.

1. Infrastructure (i.e. the total collapse of our system of our roads, power grids, bridges, and water supply)

The cost of repairing our infrastructure will be insurmountable. When we have a drought in one area, we almost certainly have excess rainfall in another. That excess of water can overload and directly damage sewer pipes, roads, power lines, and bridges, all of which we will have to repair. The cost to our country after Hurricanes Irma and Harvey alone will cost nearly $200 billion. Add to that the staggering cost of Hurricane Maria in Puerto Rico, and we will be paying for these, and future disasters for generations to come.