Trump's Approval Rating Is Declining In Every State 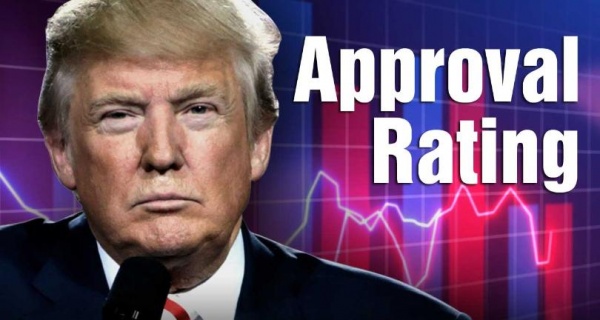 Donald Trump's approval ratings have dropped in every state since he took office, according to a large new poll released Tuesday by Morning Consult.

Trump has failed to improve his standing among voters anywhere, the poll found, even in the states where he won by large margins in the 2016 presidential election.

The results paint a worrisome picture for Senate Republicans next year, who will be defending eight seats. Democrats, however, will be fighting to hold on to 25 seats, making the overall risk of Republicans losing their Senate majority relatively small.

In Tennessee, Trump's net approval rating is down 23 points. Indiana saw a negative swing of 17 points. Both states have Senate races in 2018.

The number of voters who disapprove of Trump's job performance nationwide has also climbed by double digits: In January, the president's disapproval rating was 39 percent — by September that figure had climbed 13 points, to 52 percent.

In Nevada and Arizona, two states where vulnerable Republican senators are running for re-election next year, 51 percent of voters statewide said they disapproved of Trump's job performance.

The sheer size of the president's negative approval swings also suggests that in some states, independents and Democrats may be starting to coalesce into one voting bloc.

And in Washington, where positive approval ratings often translate into political clout on Capitol Hill, the poll bodes poorly for the White House.

As the Trump administration prepares to push a tax overhaul bill and possible immigration reform, the numbers suggest that the president's leverage could be diminished in these and future fights.

The poll's margin of error ranged from 2 to 6 percentage points, with lower error margins in more populous states.